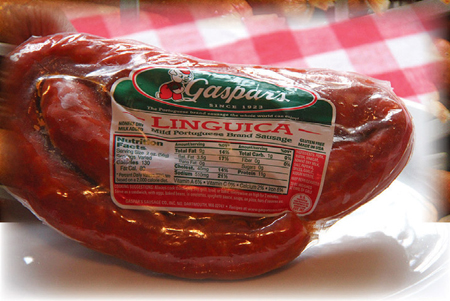 “You’ll smell like smoked sausage all day,” Bob Gaspar warns me as we tour his family’s fourth generation Portuguese sausage company in North Dartmouth, “It happens every time.” I don’t mind that, I usually smell like my Weber grill for most of the grilling season (just ask my wife). And this summer, like many people, I’ll be grilling some tasty local links fresh from Gaspar’s Sausage Company. 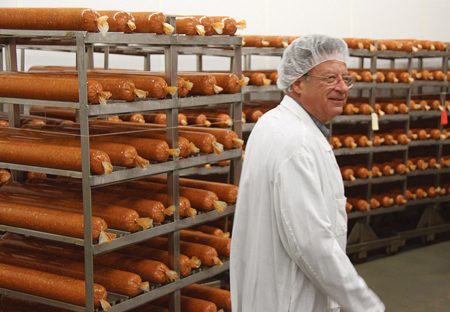 The Gaspar family started to produce Portuguese smoked sausage soon after Bob’s grandfather Manual A. Gaspar emigrated from Portugal to the United States in 1912. Over a century later, the grandchildren and great-grandchildren of Manual and Justina Gaspar carry on the tradition, making linguiça (a mild rope like sausage) and chourico (a spicier link sausage)—2.5 million pounds per year.

A staple item on tables all over southeastern Massachusetts, linguica is a versatile sausage that can be used as a main course, or countless ways such as an egg side dish, as a topping on pizza, or as a substitute for ground beef or pork, giving dishes a spicy, distinctive flavor. Grilled over lump hardwood charcoal, linguica is an especially delicious local summertime favorite.

Today, Bob runs Gaspar’s Sausage Company, along with his cousin and business partner, Charles R. Gaspar (their fathers were brothers), Charles’ two sons Randy and Chuck, and Randy’s two boys Jeffrey and Billy. Gaspar’s is still family-run just like the original company that officially started in 1923. 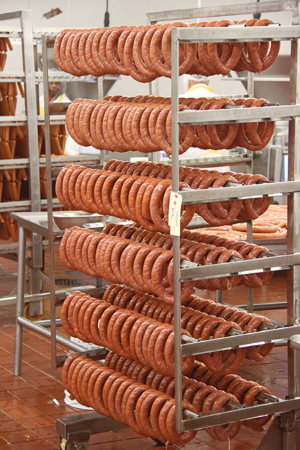 “Calling it a company in those early years is a bit of a stretch,” Bob says. “My grandparents ran a small grocery store in Providence and started making their own linguiça and chourico in their home. The men raised and slaughtered the animals, the women made the sausage.”

They began supplying other local markets and bodegas. “Markets were very different back then, they were smaller, and catered to very specific neighborhoods,” Bob adds.

The customer base grew, and in 1923 Manual and Justina moved their business to a converted garage on Circuit Street in New Bedford. They had five boys, which in turn “made their own workforce.”

All of their pictures hang lovingly not far from Bob’s office, a local “Sausage Wall of Fame” of sorts. It’s Justina’s spice recipe they still use today for their smoked delicacies. “Any chance of sharing that spice recipe with us?” I ask Bob. “That’s a secret,” he says slyly.

Business was steady through both the depression years and World War II, leading the Gaspars to relocate their operation to larger quarters on nearby Dartmouth Street. The business remained there until 1980, when Gaspar’s moved to their current location in North Dartmouth, one of the first businesses in the area. “There was nothing here when we moved, just farmland and Vanity Fair across the street,” Bob states.

The sausage making itself is a fascinating multi-step process, all taking place under Gaspar’s roof. First, the pork is coarsely ground, then Justina’s spices are added. The meat is next stuffed into natural casings and hung on large racks. The fresh links are then smoked for three hours in large floor-to-ceiling smokers (thus my natural cologne), then showered, portioned, and vacuum packaged for shipping. Altogether, the process takes 3-4 days. 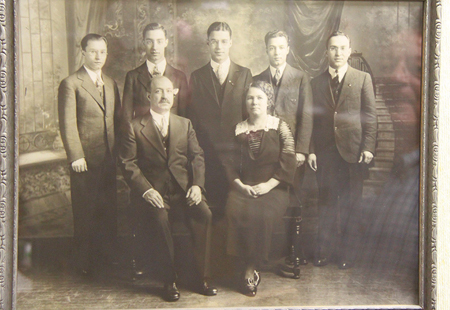 Gaspar’s can be found locally at markets like Shaw’s, Market Basket, Trucchi’s, and Stop & Shop, or at their own company storefront right on Faunce Corner Road. There, you can pick up all their sausage products, including the summer grill items like chourico and linguiça franks and patties. Portuguese sweetbread and rolls are also on hand. They’ll even make you a sandwich on the spot.

Gaspar’s sausages also are available all over the country via their mail order and web services. What if you have friends and relatives who grew up loving Gaspar’s sausages but now live elsewhere? They can order online or call for a delivery. “We have quite a few customers in Florida who used to live here; we ship to their door.” Bob said.

Gaspar’s may be the nation’s largest manufacturer of Portuguese sausages, but its roots are firmly on the South Coast.

“I started working summers at the plant on Dartmouth Street when I was young, but I eventually became a teacher,” Bob says, explaining his path to running the family business. A graduate of Bridgewater State Teacher’s College (as it was known then), he worked as a teacher at Roosevelt Jr, High in New Bedford from 1968-1975. “But the business came calling, and I thought it was the right move for my own family’s future.”

Did the years of teaching help him in the business? “Oh yes,” Bob says, “the liberal arts education helped my communication skills immensely, and I ended up in sales and marketing here at Gaspar’s.

Founders Manual and Justina were known to be generous people, helping the community through the Depression and war years. Today, Gaspar’s is still giving back. Bob serves as the Chairman of the Scholarship Committee for the Portuguese Business Association, awarding scholarships to selected applicants from New Bedford Vocational, Old Colony Vocational, Wareham, Old Rochester Regional, New Bedford High, Dartmouth High, Bishop Stang, Fairhaven High, and Apponequet Regional. “Since 1980 we’ve awarded $850,000 to students in the New Bedford area, $49,000 last year alone. There are so many deserving kids, we received 103 applications this year,” he said, showing off a large stack of hopefuls on his desk.

A finalist this year for the New Bedford Chamber of Commerce’s “Small Business of the Year” award, Gaspar’s employs 50 people. What would Manual think of all the modern machinery used to not only make the sausages today but to sell it via the Internet? “He wouldn’t believe it. I barely believe it. I remember when we got a fax machine. I thought that was amazing!” 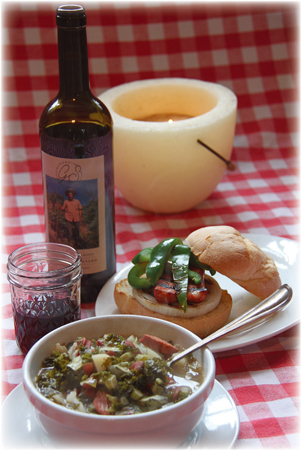 In a world that keeps getting bigger and impersonal with all the technology at our fingertips, it’s nice to know there’s a family company right here that keeps its personal touch not only in the product but also in the community. That’s amazing.

Mike Gioscia is a writer, drummer, dad, and president of the Soule Homestead Education Center in Middleboro. In the summer he can be found carting his kids, wife, and dog around the South Shore/Coast looking for fresh local food to cook on his trusty Weber grill (local IPA in hand).