Hart of the Matter: bringing veterans and farming together 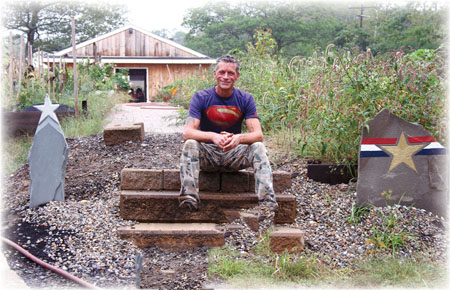 Small farms have been the foundation of Plymouth’s economy for many centuries. In fact, sustainability was the goal of the early colonists, with the family farm at the heart (no pun intended!) of the local economy. After WWII though, we steadily lost the local farm infrastructure to the corporate farm system. However, since approximately the mid-1990s, small local farms with a focus on sustainability have made a comeback. Also on the rise is the partnering of combat veterans with the farming experience and its lifestyle, work, and ownership. Here on the South Shore, our own Three Harts Farm in the Manomet section of Plymouth proudly embraces this positive trend. In keeping with the tradition of farming in Plymouth, the Farm is a place for veterans and the families of veterans to experience

Also on the rise is the partnering of combat veterans with the farming experience and its lifestyle, work, and ownership. Here on the South Shore, our own Three Harts Farm in the Manomet section of Plymouth proudly embraces this positive trend. In keeping with the tradition of farming in Plymouth, the Farm is a place for veterans and the families of veterans to experience connection with the community while learning about sustainable agriculture.

At Three Harts Farm, there is more than just produce, herbs, and flowers being grown; the Farm brings veterans, agriculture, and community together by offering combat veterans a haven to transition and reintegrate back into civilian life while teaching them about sustainable agriculture. It offers multiple opportunities to have meaningful work and utilize their military skills in service of themselves, their families, and the community. In return, the community has embraced the chance to give back to those who have served our country and defended our shores and others.

A relatively new addition to the local farm scene, Three Harts Farm was purchased in January 2015 by Christopher C. Hart, founder of the Nathan Hale Foundation, a nonprofit organization which provides services, support, and information for veterans in the Plymouth County area. The Farm is dedicated to three United States combat veterans: Clarence G. Hart Jr., US Army WWII, killed in action in France; Thomas Hart, US Air Core WWII, Navigator Bomber; and George Hart Sr., who served in both WWII and Korea. Mr. Hart is the grandson of Clarence Guy Hart Jr, and grandnephew of veterans George Hart Sr. and Thomas Hart. The farm is named for these three Harts!

Local businesses, including Glynn Electric, Reynolds Construction, and PowerCorps performed the lion’s share of the heavy construction required to develop land and repair the barn. Volunteers also have donated tools, supplies, and elbow grease, each taking a piece of the farm as their responsibility for its upkeep. Individual volunteers continue to keep the farm running. It is truly a community effort that allows the community to give back to the veterans. 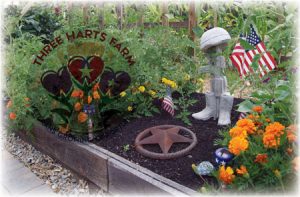 In 2001, Plymouth’s American Legion Post 49 was named after Diane’s father, Edward A. Ribeiro. With experience in growing vegetables and fruit and having learned many gardening tips from her grandmother, making the veteran and agricultural connection was a natural for Diane. She and Christopher share a mutual bond in being descendants of combat veterans, and both are dedicated to giving them their utmost support. Christopher gushed, “The place could not run without Diane!”

Before starting Three Harts Farm, Christopher reached out to veterans to learn directly from them what they needed most. Many veterans returning from combat have Post-Traumatic Stress Disorder (PTSD), Traumatic Brain Injury (TBI), loss of a limb or limbs, and other health issues which make returning to their former lifestyle impossible. Working on a farm and growing plants gives veterans more than a new skill or career—it gives them something intangible, an inner peace and quiet rhythms. The seeds of joy and hope may lay dormant inside until planted in connection with love and support from family, friends, and community. According to Christopher, “As far back as the civil war, veterans from rural farming communities had less PTSD than their urban counterparts.”

The Farm, a half-acre former horse stable, is surrounded by approximately 75 acres of wooded area with trails and ponds accessible by foot or bike. The grounds add to therapeutic aspects of the farm experience. Per Christopher, he wants the farm to be a place of beauty as well as functional. He stressed the importance of nature in healing, and stated that the “multi-stimulation of the brain by nature’s sounds, colors, smells, and wind aids in the healing of Post-Traumatic Stress Disorder and Traumatic Brain Injury.” Further, the repetitive nature of the physical work on the farm as well as the family atmosphere, combined with the military training, significantly assists those veterans with their recovery.

The Farm is a place for veterans to learn agricultural skills which then may be used to start their own farm. This past spring marked Three Harts Farm’s first growing season. Veterans and their families participated in planting and harvesting vegetables, flowers, and herbs. The seeds planted are of the heirloom variety, non-GMO, healthier, and heartier varieties of vegetables, fruits and herbs, including tomatoes, squash, corn, beans, grapes, greens, rosemary, oregano and many more. Veterans can pick greens for lunch or dinner or take home. Each Friday is Farm Day, when veterans may go and pick food or find a bag of produce waiting for them to take home. Veterans are also welcome to use other skills, such as woodworking, to contribute to the farm. 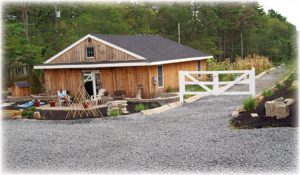 Training and workshops are open to their families as well. (An activity for children such as making art with sea glass is planned for next season.) Workshop topics include local and European growing techniques, harvesting and putting up the harvest, saving seeds, and plant propagation.

Many of the growing techniques are low-cost, low-soil, and low-water use, such as using straw bales to grow vegetables and a no-water technique from a traditional German method called a Hugelkultur. In addition, raised beds and raised garden table beds allow veterans with certain types of physical disabilities to garden with ease. A 180-foot walkway lined with beautiful flowers has been built for veterans in wheelchairs and those who utilize a walker to access and work the farm. To provide even greater access for veterans, there are plans to add an additional 75 feet of paved walking paths.

Healing is hard work; it must be tended, paid attention to, and nurtured.

During the winter, when the earth is dark and quiet, a veteran may remember those who did not return, or much worse. He or she may then also reflect on the prior season’s work of growing and harvesting and take pride and satisfaction in their accomplishments. Then spring comes again, and with it, light and new life. Hope and purpose return. The seasonal cycles continues on the farm and in us. At Three Harts Farm, positive experiences for veterans and their families grow in a safe environment fed by love and support. Christopher continues to develop the farm as a means for healing. For example, in October 2016 a water garden was built, complete with waterfall and wooden water chute, providing soothing background sounds across the gardens as veterans work and relax on their own or with their families.

When one person goes to war, we all go to war. And when our veterans return, we owe them a means of reentering and connecting with civilian life again. The healing of our returning veterans, like the farm, is local and needs to be sustainable. To be welcomed in your community by virtue of a place to work, be, grow new life, and make connections is a great gift.

Re-adjustment can be very difficult for the returning combat veteran. The Farm plays a significant role in assisting in the processes of re-integration into the community. We are intricately linked to the people who grow our food and fight our wars; we could not do without either one. Three Harts Farm is the result of Christopher’s and Diane’s commitment to provide veterans a safe haven for healing and restoration, and of a proud desire to give back to our veterans and their families. It is a place of hope and joy for all seasons. As Christopher explains, “the farm belongs to the veterans and their families.” 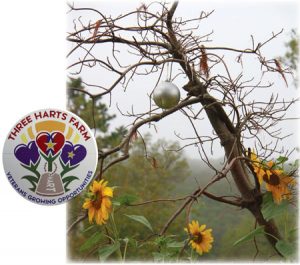 Karen DiTrapani, a Massachusetts native and former Plymouth resident, now resides in Albuquerque, New Mexico. For over five years, she has volunteered her time providing meditation and alternative healing services for Veterans with PTSD and chronic pain.