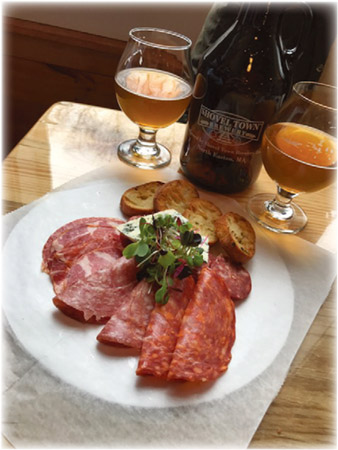 Nestled in the heart of Easton’s Historic District, Shovel Town Brewery happily joins the southeastern Massachusetts beer scene. After three years of test batches and planning, owners James McSherry and Frank Altieri, both Easton natives, opened their doors in February to find a welcoming community eager to taste the duo’s brews, pub-style appetizers, and small plate offerings. Neighbors before they were business partners, the two joined forces for the Easton Children’s Museum’s annual “Night at the Brewseum” homebrew competition and fundraiser. The pair made a few beers for the showcase and brought home second place with one of their brews in the 2013 competition. Six months later, Shovel Town Brewery was incorporated.

The building Shovel Town occupies is rich in history. Situated at the rear of 50 Oliver Street, the building was once a shovel factory. In fact, Easton was home to the United States’ first shovel factory, built in 1803 by John Ames, and his son Oliver. In 1848, the company was renamed Oliver Ames & Sons. That same year gold was discovered in California, making the shovel business quite lucrative for the Ames family. In fact, Ames shovels were so highly regarded they were used in a variety of highly visible projects including the Oregon Trail, Statue of Liberty, Empire State Building, Golden Gate Bridge, Mount Rushmore, the Panama Canal, and were used in building the many railroad tracks that line our country. In addition, the U.S. Army made Ames shovels standard issue from the Civil War to the Korean War. With the building so steeped in history, McSherry and Altieri renovated the space themselves; adding brick veneer and wooden chair rails to make the cozy dining area feel like it’s been there since the early 1800s.

The two-barrel brewhouse produces beers based on award-winning home brew recipes–enough to keep the eight-handle tap system constantly full with fresh suds. Frank, a self-described foodie, works the kitchen, bringing “simple, but nice” dishes made from locally sourced ingredients whenever possible; some of it, including hops, coming from Easton’s own Langwater Farms. The menu, which includes homemade sausages, was inspired by vacation visits to European biergartens. In addition, Frank tested the flatbread recipes on his family before bringing them to the brewery.

Frank and Jim had planned to be a two-man wrecking crew, brewing, serving, cleaning, and working the administrative side of the business themselves, “but we quickly realized that would be tough,” Frank says. So they brought on Keith Carvalho to run the brewhouse, and Will Hope to manage the front of the house. Numerous Easton neighbors, including Stonehill College students, have also pitched in.

Thursdays through Saturdays, Frank and Jim can be found at the brewery, pouring beers and chatting with patrons. “People enjoy really good beers and socializing,” Jim says, pointing out that the brewery has recently been accepted as a location for the Untappd app, “and we love the feedback.”

In the future, the pair is looking to expand the location and considering the idea of offering cans and a limited number of kegs for local pubs. “Not too big,” Frank says. “We’d like to stay hyper-local.”

They offer a variety of beers, everything from East End Cream Ale (light and refreshing, with a soft, creamy mouthfeel; try the surprising vanilla version for a real treat) to Shovelshop DIPA (an unusually smooth 8% ABV with a giant tropical fruit nose, thanks to the Citra finishing hops) to Washington Street Chocolate Porter (with a deep, smooth roast and two pounds of cocoa placed in the fermenter). The beer to try, however, is the Wheaton Farm Hefeweizen, a surprisingly robust version of the traditional German wheat beer, rich with bubblegum and clove flavors, and a true-to-style banana aroma and finish. Try it with some of the kitchen’s sausages!

Matt Foster is a South Shore based beer nerd. When he’s not writing about beer, or drinking beer, or brewing beer, or working (sigh… not with beer), he’s spending time with his wife, Lauren, and their two children.