We’re Livin’ on Nuts and Berries : the elusive beach plum 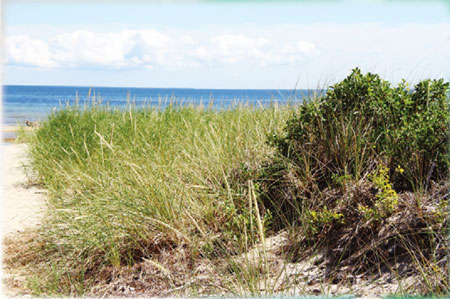 When following a troop of chimpanzees in the wild, a certain primatologist (more on him below) is in the habit of trying to eat whatever plant foods his subjects select. Evidently, browsing with chimps has afforded the scientist first-hand knowledge of a fact our ancestors knew well: there’s lots of vegetation out there that isn’t good for us humans to eat. Even with the guidance of the chimps, experts at foraging for a wide variety of foods, this poor Homo sapien found himself hamstrung. With his wimpy jaws and puny molars, he was simply unable to chew and swallow the bulk of the apes’ dietary selections. Furthermore, he experienced another physical difference between humans and primates: the composition of chimps’ saliva allows them to happily eat extremely astringent foods that humans simply can’t abide, at least in their natural state. (What is astringency? Take a bite of a very green banana or raw plantain, or even a banana peel—then you’ll know and not soon forget.) The poor hungry fellow had to sit and watch the chimps chow down on tannic roots, fruits, and leaves that he couldn’t even tolerate in his mouth, much less persuade down the hatch, digest, and use as nourishment.

Richard Wrangham, the primatologist in question, shared this fascinating anecdote in his excellent book, Catching Fire; How Cooking Made Us Human. His main thesis has more to do with how we have more than compensated for that lack of true omnivory by learning to cook, (roast, boil, grill, or fry that green banana or plantain—delicious!) rather than how our hominid evolutionary path has narrowed our capacity to digest many raw plant foods in the last two million years.

All those eons of accumulated primate knowledge had to give our first human ancestors a serious leg-up on food selection lore, though the topic has not received much study. Given the hundreds of thousand years of human evolution, and the subsequent development of food cultures, we are left with plenty to ponder when it comes to how our early ancestors deciphered what to eat. 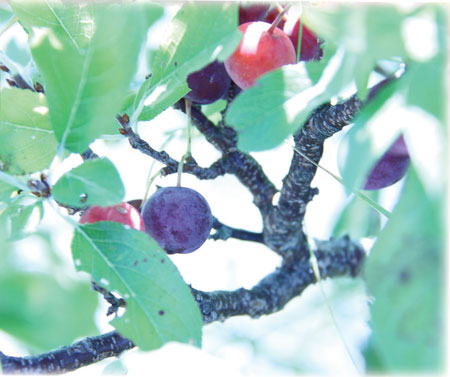 Beach plum on a tree branch.

Working backward from documented dietary selections among hunter-gatherer societies provides some perspective on early foraging, but also leaves us with more questions than answers. For example, how did people of the northern hemisphere figure out how to process the leaves and bark of an oak tree in an attempt to unlock its edibility for nourishment? The many steps required to render acorns delicious and nutritious (steeping in running water, boiling, drying) are not exactly intuitive. And in South America, how many folks succumbed to cyanide poisoning while cooks experimented with cassava? What part of soaking, rinsing, squeezing, and drying would transform it from a deadly tuber into a sustaining staple? Then, of course, there is the mushroom. How do the folks who assemble the many key facts you need know to eat mushrooms, survive and thrive?

When you consider foraging from this standpoint, fruits are the gift of nature for all of us primates. I’m not referring to the ‘improved’ fruits that are the result of centuries of human selection and breeding. I’m talking about all those small, big-pitted, astringent-skinned items like tupelo berries, or rough, seedy, hairy things like rosehips. Once you’ve tried feeding your family on such bits and bobs, the beach plum appears as a huge, succulent source of sweetness and nutrition. 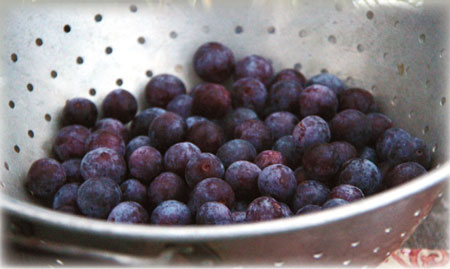 Beach plums in a colander.

It also puts into perspective the fiercely protective attitude seasoned gatherers of beach plums tend to adopt toward interlopers in ‘their’ patches. (The discovery of shallow graves of hapless beach plum poachers in the Chatham dunes, for example, would not be a shock.) And how incredulous we are when some clueless landowner yanks a treasured ‘secret’ beach plum shrub out of a parking lot median strip in favor of other ‘landscaping’. (I’m looking at you, McDonald’s in Plymouth.) As I write, I have a bead on some loaded beach plum bushes, and wild horses could not drag the coordinates out of me as that little grove of gems are ripening up.

What do I like to do with them? With their high pectin content, relatively thick, tannic skins and large pits, beach plums do well cooked up whole, and then passed through a jelly bag or food mill to make their most renowned products—lovely, bright jellies and jams. Such preserves have been standbys over the last century and a half here in New England, since cooks generally have had access to plenty of sugar, as well as the latest food processing technologies.

But, in our laid-back household, we love to eat beach plums in a rustic, French farm-wife kind of way: baked in clafoutis. The most down-home, provincial French versions of this batter pudding call for intense, small cherries, with pits left in for flavor. Following suit, we have conceived our house clafoutis to use our own local wild cherries and grapes, and, of course, the beach plums in question. Conveniently for those of us who like to take the easy path, leaving the fruit whole does contribute complex flavor and deep color; and it just means that we only serve it among friends (or en famille, as the French say). On an autumn evening, there’s nothing quite like savoring a foraged treat. Best of all, kicking back and spitting pits over the porch rail lets us know that we are truly in our own domain, like chimps lined up in the branches of our favorite super-tannic wild plum tree. 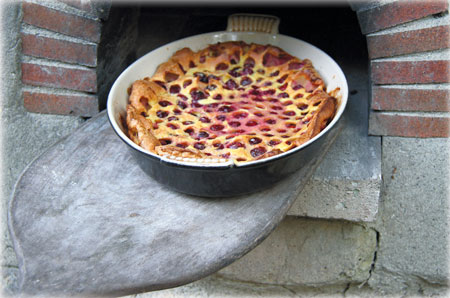 I’ve adapted this recipe from the clafoutis auxcerises published in a 1937 French cookbook, Les MénusDétaillés de la Ménagère. The author takes an unnecessarily snooty tone with it, sneering (in my loose translation), “This is thought a pleasant dessert by slack-jawed country yokels with no access to fine Parisian pastry.”

Paula Marcoux is a Plymouth food historian and author who reminds you to always get identification help from a trusted source (or a nearby chimp) before sampling wild foods.