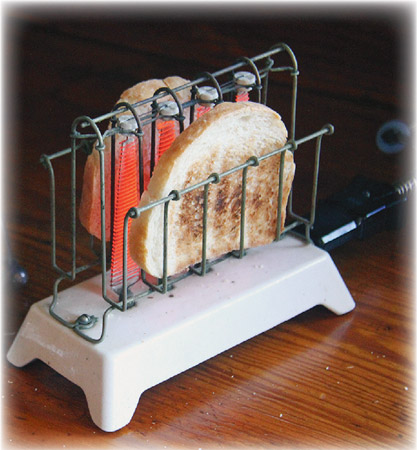 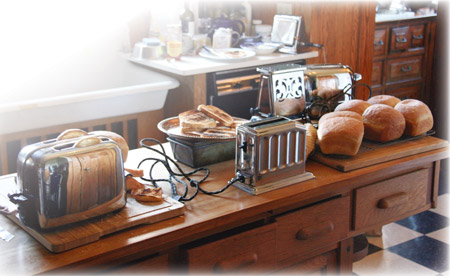 Vintage toasters and loaves of Dr. McCann’s bread—all waiting for their close-ups. 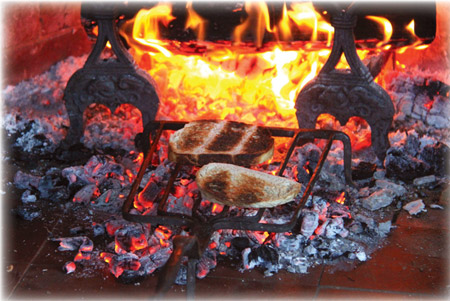 Broiling devices have been used for millennia, and yield terrific results (for meat and fish as well as toast) if you have a nice bed of coals. Some English cooks brought “gridirons”—the type of horizontal broiler pictured—among their household goods as they migrated to this continent in the 17th century. (This reproduction gridiron was crafted by blacksmith Mark Atchison.) 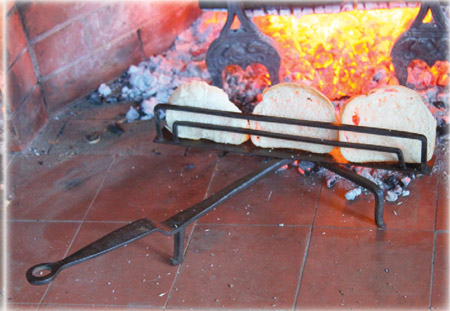 Designed specifically for toast (as opposed to a more generic broiler like the gridiron), this type of rotating device makes the work more convenient and comfortable for the cook. Popular from the late 18th century to the mid 19th century in New England, it still makes cracking toast.

The austere, yet irresistible, General Electric D-12, the first mass-marketed electric home toaster. Rack design makes it almost as easy to burn yourself on as a gridiron. “The porcelain base is an ideal insulator against heat and electricity, well calculated to inspire trust in those exciting early days of electricity in the home.” 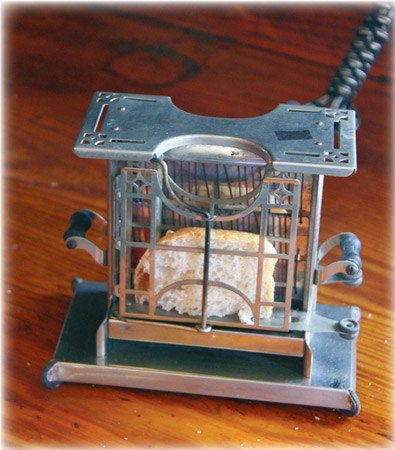 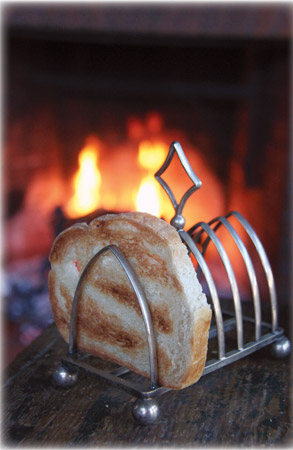 Toast was served in racks to maintain the thoroughly dry crispness that was once the hallmark of a properly made product. As the design of electric toasters became more and more enclosed—solely to hasten toasting—the resulting lack of ventilation meant that the bread’s interior remained moist, even while the surface browned nicely. Tastes changed to accommodate this technological shift for the sake of convenience, but 19th-century breakfasters would have condemned most of today’s toast as soggy and flaccid. 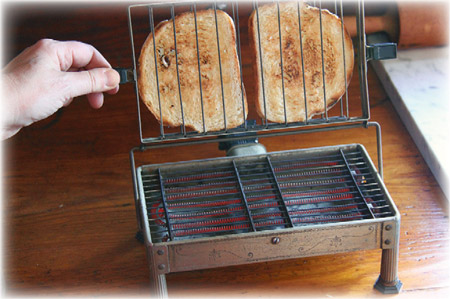 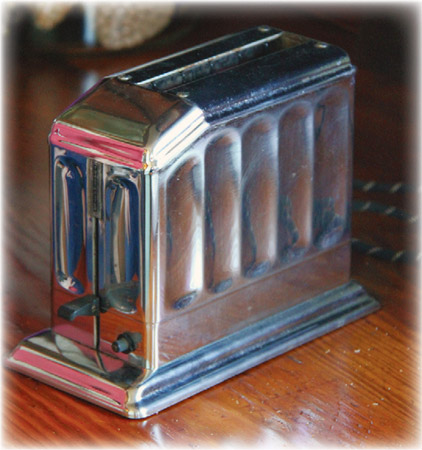 This one-slot Toastmaster was part of the earliest line of popups, first introduced circa 1930. A handsome, well-designed classic, with an automotive-inspired chrome styling. Two sides of the bread are toasted at once, a timer ejects the toast, and the attendant need no longer fear that distraction will bring about home conflagration! 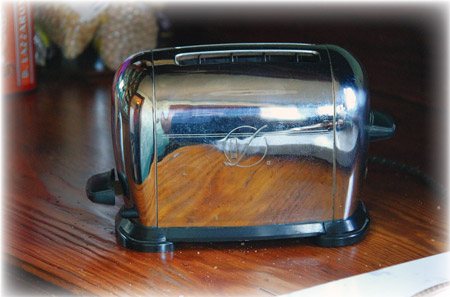 This circa 1940 Toastswell sports a pleasing Buck Rogers aesthetic. 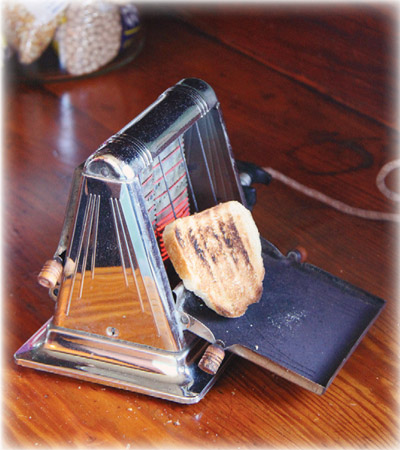 An economical choice for those who could live without the latest in pop-up technology— the Super Star Aristocrat of the mid- 1940s. Despite being a low-cost model, this chrome “flopper” is still in daily use on the author’s breakfast table. 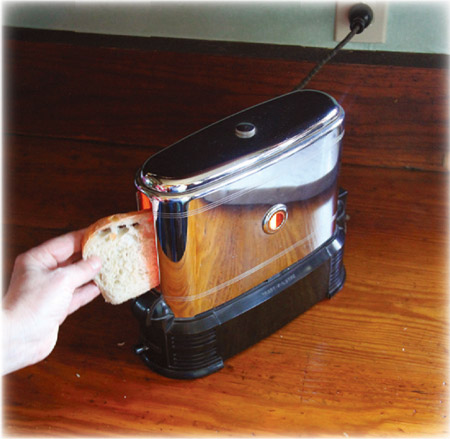 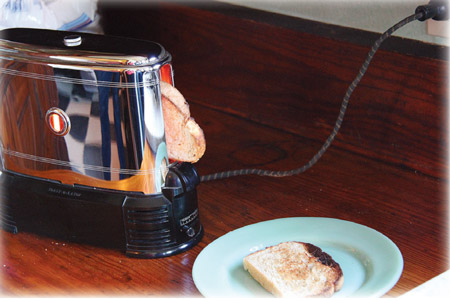 The fabulous Toast-o-lator—perhaps the most entertaining toaster ever made. A bread slice inserted in one end marches inexorably (at variable speed, depending on the setting of the light-to-dark dial) through the gauntlet of heating coils, leaping triumphantly onto the plate upon exit. The peephole only adds to the excitement. Late 30s through early 50s. 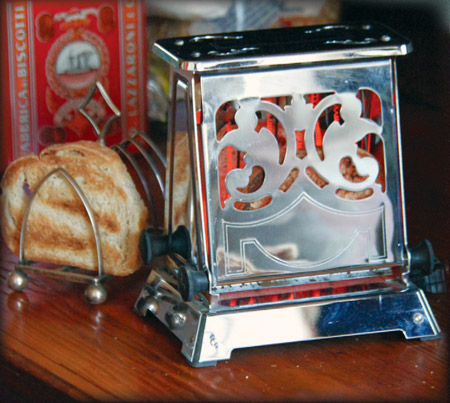 The thoroughly lovely, solid, Hotpoint “turner” made by General Electric, circa 1930. Just enough ventilation to still make crisp toast. Turn the knob and the slice flips itself over with the momentum it gets from sliding down the door. 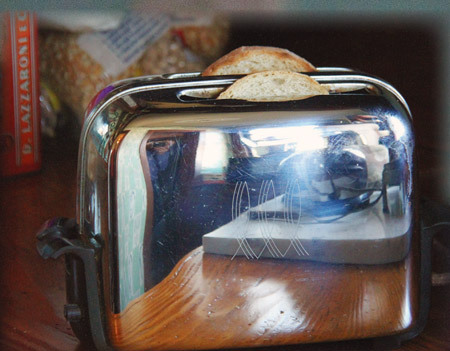 Paula Marcoux exercises her bread-slicing arm and lovingly deploys her 1940s Super Star Aristocrat toaster in her Plymouth home. She is the author of Cooking with Fire.