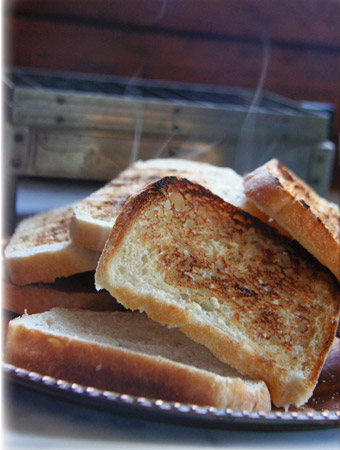 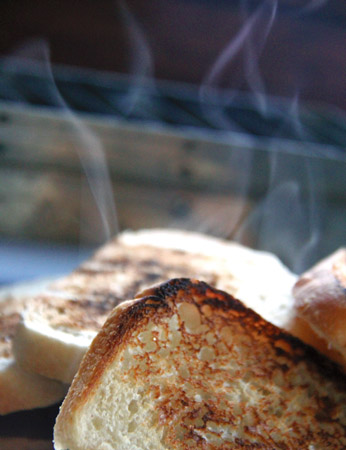 What’s the big deal about toast, you’re wondering? How hard can it be, right? You put your slices in the appliance, maybe press a button, and bingo: toast.

Well, let’s try an exercise. I want you to visualize the worst toast you ever had, and then the best; then measure the gulf that separates them.

Here’s my toast perigee: a Waffle House along I-10 somewhere toward the outer limits of the Florida panhandle. After enjoying the requisite salvo of “good morning” greetings from the staff, I order a cheese omelet and “wheat” toast. The omelet is made to expert grill-cook perfection, notwithstanding its filling of American cheese (desirably molten, yet still fascinatingly square somehow). But to the matter at hand: the toast. Four isosceles triangles prepared from the most cottony of white breads, the dough of which had been tinted brown at the bakery with a food service substance, most likely corn-derived, to suggest “wheat.” Nothing wrong with the degree of toasting—once again, perfectly executed to American short-order standards—but the act of smearing the toast with yellowish oleaginous matter has crushed the fragile structure of the bread (or baked paste of whipped starch, more accurately) to the thickness of a greasy saltine and the density of a floppy old kitchen sponge. Sad!

And the apogee? To keep the comparison fair, I will dispense with my usual fetishes of freshly ground whole grains, natural leavening, and wood-fired baking. Instead, I think of the delicious white bread baked by the mother of my old friend Sean McCann: evenly but thickly sliced, and toasted, rank upon rank, in the capacious four-slice toaster that lay alongside the kitchen table next to an always hot, always full, Rockingham teapot clothed in its tea cozy. The toast ritual might occur at breakfast, lunch, tea-time (which might segue into cocktails and dinner), or after a night on the town. Enacting it upon all these occasions in the course of one day was not considered out of the question. 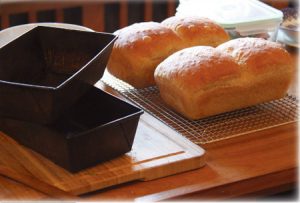 Dr. Eithne McCann made bread from King Arthur All-Purpose Flour in vast batches, kneaded by hand or in an antique rotary tub, baked in old-school pan loaves, and bagged and piled like cordwood in the chest freezer in the back hall for us deadbeat punks to thaw, slice, toast, and repeat at will. The house protocol allowed for the occasional eating of raw bread under certain conditions: just after the loaves had cooled, a little more thinly sliced than for toast (⅜”, rather than ⅝”), slathered with good butter and laid with freshly carved ham, say. And it was very good as bread. But I swear that more than 95% of these loaves passed through the toaster before being eaten, just buttered, or maybe also daubed with Eithne’s delicious homemade plum jam (with pits!), and it was surpassingly wonderful as toast.

This endless heap of crispy, crunchy, savory goodness was an extraordinary gift from Dr. McCann to a parade of kids who were breaking from our own homes and looking for our true places in the world. To be entrusted with slicing the bread at requisite evenness or with snatching the hot toast from the blazing maw and anointing it correctly with butter was balm to those of us afloat between our childhood homes and our lives to come. This toast, a quotidian comfort in the very best sense of the word, told us that things were fine, that even if it took forever to find our own true place, that we always were welcome here by the cutting board.

Remarkably, Dr. E., now in her nineties, is still keeping the larder stocked, baking her bread in reassuringly large batches. It’s pretty mind-bending to me that I might roll up to the McCanns’ door on any given day and join this afternoon’s toast ritual, as if four (4!) decades hadn’t intervened since my first laughter-filled afternoon at the big kitchen table.

Try the recipe for yourself—our puny two-loaf version follows Eithne’s heroic-scale recipe, which was transmitted to eSS&SC by Eithne’s daughter and baking standard-bearer, Dervilla McCann, and which is here printed in her words. Thank you both.

by: Paula Marcoux has been under the spell of home baking her whole life. It’s worked out pretty well so far.