At Home with the Range; Lunchtime at Glenwood Bootcamp 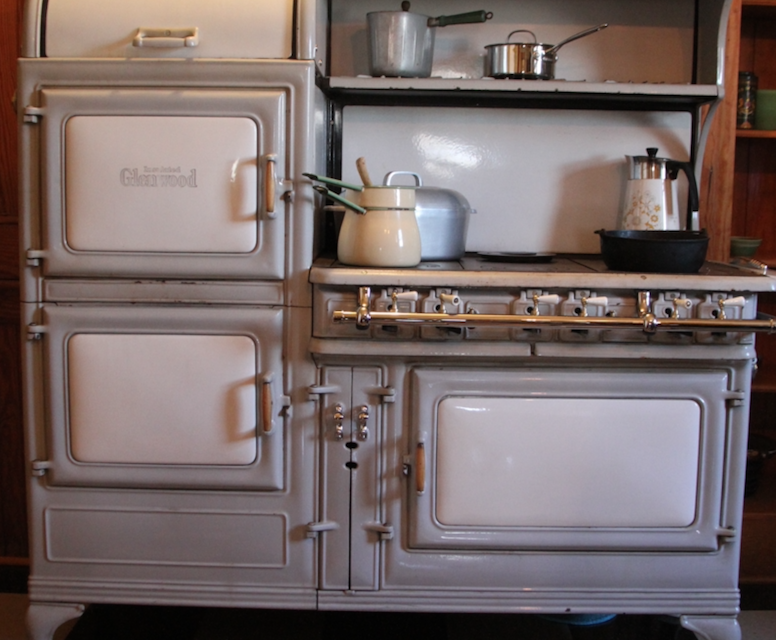 Speaking as someone permanently under the spell of live-fire cooking, I admit that I was at first a touch dismissive of the challenge of learning to cook on an antique gas range. Heck, after all my years of down and dirty hearth cooking, I had to make a mental shift to appreciate even the wood-fired Glenwood, so neat and buttoned down and factory-made and all. But just lift one of those cast-iron lids from the stove’s flat-top and—glory be, if that isn’t a real roaring fire—flames, embers, the whole business, just secretly stowed away in there, ready for cooking. 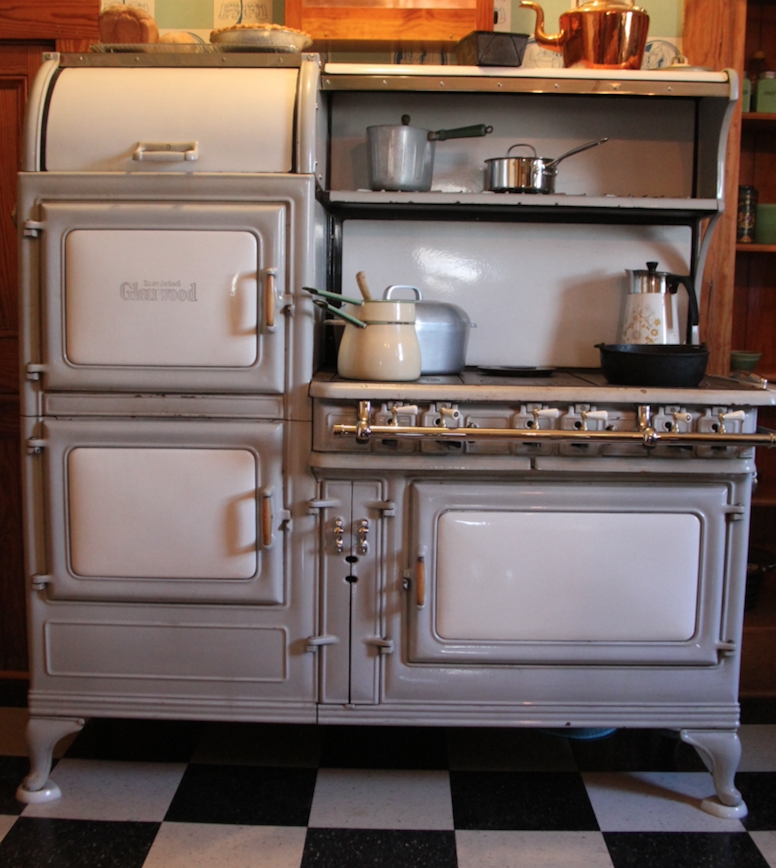 But a gas range, even at almost a century old? Sure, it’s beautiful, but gas is gas, right? Wrong again!

My friend David, who needs no encouragement to go completely over the top when it comes to properly furnish his shingle-style Plymouth home, recently acquired a 1928 Glenwood gas appliance from the Antique Stove Hospital in Little Compton, RI, and had it restored at the Stanley Iron Works in Nashua, NH. He promised me from the get-go that he’d let me play with it.

David’s idea of comfort is to be swaddled in a cocoon of deeply textured historical appropriateness. He sleeps better at night knowing that his light bulbs are the correct technology and vintage for his 1880s wall sconces. (It’s probably helpful that, even burning at full bore, these bulbs are dim enough not to interrupt the slumber of the most dedicated insomniac.). He takes great pleasure in knowing that the very guts of his house’s plumbing flow true to their early twentieth-century vintage; knowledge in which he is secure because he has personally refabricated all their teensy little rubber ball valves over the years. So when his cute, but pretty burnt-out, 1930s gas range became totally unreliable, David decided to replace that unit—in the same way the house’s former owners did when they remodeled in 1927—with the best locally-made stove that money can buy: a top-of-the-line Glenwood. Two ovens (including one way bigger than any modern domestic one), a large broiler, six burners, a simmer shelf, and a warming oven, plus—get this—a vertical broiler! All wrapped in the vintage gleaming solidity of locally cast iron, nickel, and enamel. The pride of Taunton. 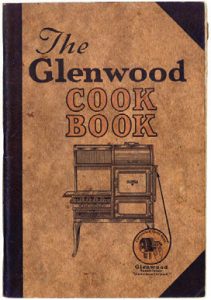 The expense! The uncertainty! The months of waiting! The drives to Nashua! But then the blessed day when six of us, plus a two-ton come-along, persuaded the unit into the kitchen (stripped of every moving part, the core weighs a mere 850 pounds).

One look at the massive beauty of the reassembled stove in its new home elicited a collective gasp from all of us on the moving crew. Somehow it both dominated and blended into its new home. We hadn’t yet cooked a single thing, and it was already worth all the trouble.

David threw himself into a kind of Glenwood boot camp, preparing himself before beginning to put the thing through its considerable paces. In anticipation, he had purchased and memorized the 1927 Glenwood Cookbook and The AutomatiCook Book. The latter of these volumes was issued by the Skelgas Company of Kansas City, Missouri, the makers of the beautiful Robertshaw thermostats plumbed into both flanks of David’s oven. The book’s introduction makes the case for an idea new enough to warrant capitalization in 1927: “Time and Temperature Cooking.” 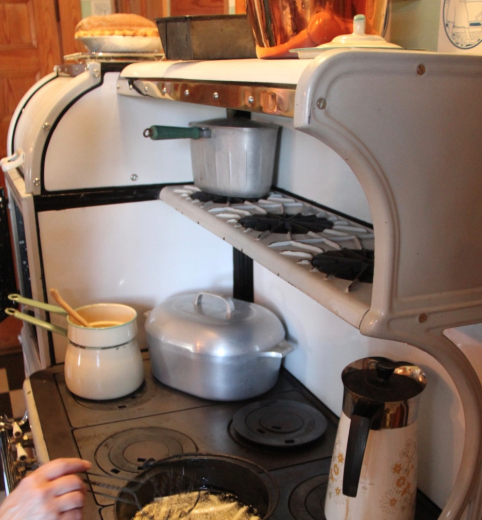 Time and Temperature cooking eliminates all the uncertainty from cooking. Successful results are predetermined and no previous experience is required. You simply mix the recipe or prepare the foods as directed, set the Robertshaw at the required temperature mark, then light the Oven Burner, and allow the food to remain in the oven, without further attention, for the proper length of time.

Okay, so we’ve gotten used to the thermostat concept in the last 90 years, but here are a few functions we’ve lost with today’s stoves:

Above the six killer regular burners is suspended a filigreed shelf, with room for three pots, constructed of tubular iron piped down into the works of the stove. Once a food is brought to a boil on a burner, the cook moves it up the shelf where it can be held just below a simmer forever. Ideal for braises, broths, stews and other foods easily ruined by too-aggressive cooking. Love that. 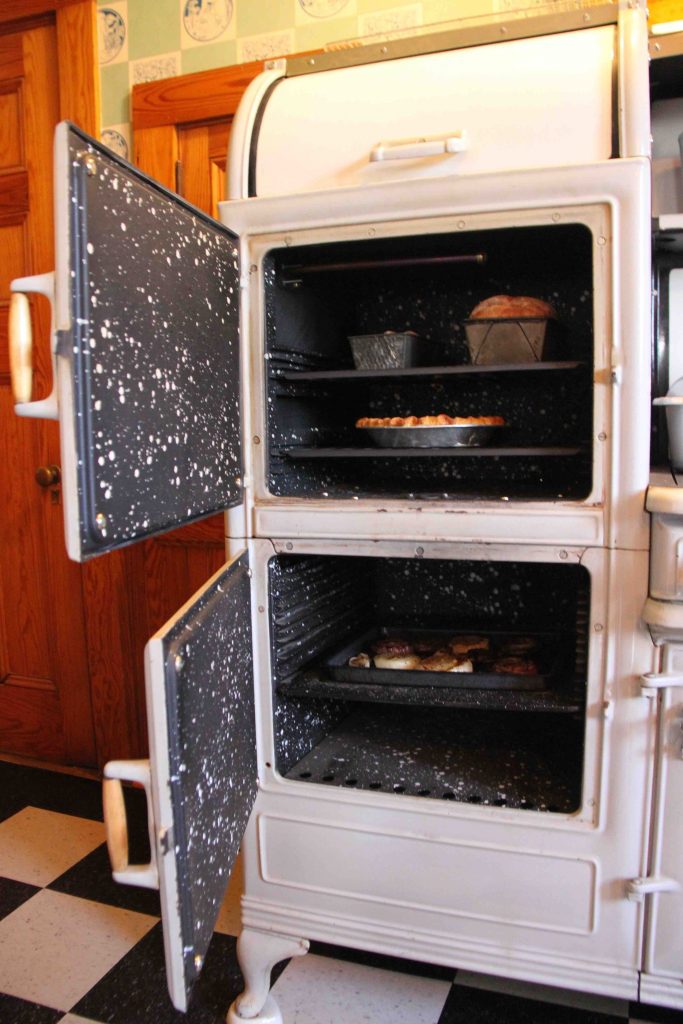 Above the oven/broiler stack, on the left side of the range, is a bread-box-looking affair that is perfect for keeping foods or plates hot while the meal is finishing up. When the ovens below are idle, the temperature in the warming oven is cool enough to please members of the tractable microbial community we have enslaved to rise our bread and culture our yogurt.

Just plain fun, like an overdriven toaster for steaks. Perhaps a tad dangerous, which makes it more fun. One day recently, David and I made lunch together, using those above-mentioned 1927 appliance owner’s manuals/recipe pamphlets, plus a few books of my own of the same period. We started with a simple split pea soup that allowed us to use the simmer shelf; we were delighted to find that that feature kept the soup at 212 degrees, or slightly under, the entire time. It was tasty with slices of the whole wheat bread that we had proofed in the warming oven and baked in the smaller of the two ovens, along with the mock cherry pie slated for dessert. I had done a trial run of those recipes for baked goods in my modern gas oven at home the previous day, and the Glenwood versions proved far superior: perfectly even execution. 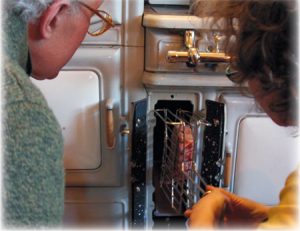 When it came to stove top cooking, the Glenwood’s extraordinary degree of control and power was on display as we steamed a bread pudding with walnuts, dates, and pears, then whisked up its accompanying custard sauce.

And then, the moment we had been anticipating most fiercely: sliding a beautifully marbled rib steak into the fiery maw of the vertical broiler. As I latched the cute little enameled doors behind it, I’m sure I saw David mentally getting out the fire extinguisher. Several minutes later, however, we withdrew a perfectly cooked steak from the fearsome slot. About a tablespoon of drippings in the catch pan below, no flare-ups, no mess at all.

The meal was great, but the experience of using the stove was a positive revelation of smart design and beyond-sturdy construction. At 90 years old, David’s range could, I believe, cook the pants off of even the fanciest top-of-the-line unit selling now. Certainly, it will outlast today’s luxury model with its failure-prone electronics, even making an allowance for replacing the “digital interface” on the 2017 stove every few years. It’s just a shame that Glenwood didn’t weather the changing marketplace; but even so, the name is a piece of local food history that we here in southeastern Massachusetts should be proud of. We’re indebted to those dealers and restorers who are working to preserve that legacy for future cooks.

A few years back, Christine Barensfeld decided to include a wood-burning range in the kitchen of the nineteenth-century farm she is restoring in Boxford as part of a project called iFarm (ifarmboxford.com). She contacted me, and I hooked her up with Wilson “Skip” Mull, a legendary stove collector and restorer in Rochester. She wound up with a gorgeous and stately 1903 Glenwood E, emblazoned with “MAKES COOKING EASY” on its spotless nickel trim.

I asked Christine to reflect on the experience, now that the dust has settled.

On her motivation:
I envisioned having a wood-burning cook stove as part of the farmhouse renovation from the get-go and wanted to find the biggest, baddest Glenwood I could. Melding the old house with the new kitchen was important to me so the stove needed to be as original to the period as possible. Basically the kitchen was designed around the stove.

On shopping for a stove:
Meeting Wilson and seeing his shop was a memorable experience. First, he asked me what kind of Glenwood I wanted and I said, “not too fancy, not too plain.” He said, “I have just the stove for you.” Then we proceeded to his garage, which was full, from floor to ceiling, with cast iron parts and stoves in different stages of restoration or dismantlement. He pulled a box of cast iron parts out from under a workbench and said, “This is the stove!” I said, “Okay Wilson, whatever you say.”

The biggest challenge:
The hardest part was waiting for the day when Wilson would come to install the stove. The construction of the kitchen utilized traditional timber frame techniques and that went up quickly and easily. But it seemed to take the mason forever to build the chimney.

On learning to cook with her new stove:
After I figured out that the first step is to heat the air in the chimney, firing up the stove is a snap. It’s taking me longer to understand what effect opening and closing the various vents and flues has on the temperature of the stovetop and the oven. I haven’t been very adventurous in the cooking department, which is why I’m hoping you will come and show me a few things. (Mea culpa. PM)

Would she do the same thing again?
The preservation of historical artifacts is critical to our understanding of how we got to where we are today. I would encourage anyone who is considering a wood-burning stove to take the plunge. It’s more straightforward and has much more utility and longevity than whatever is available in the appliance store today. 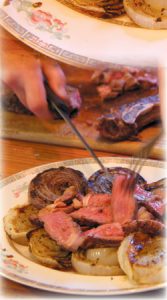 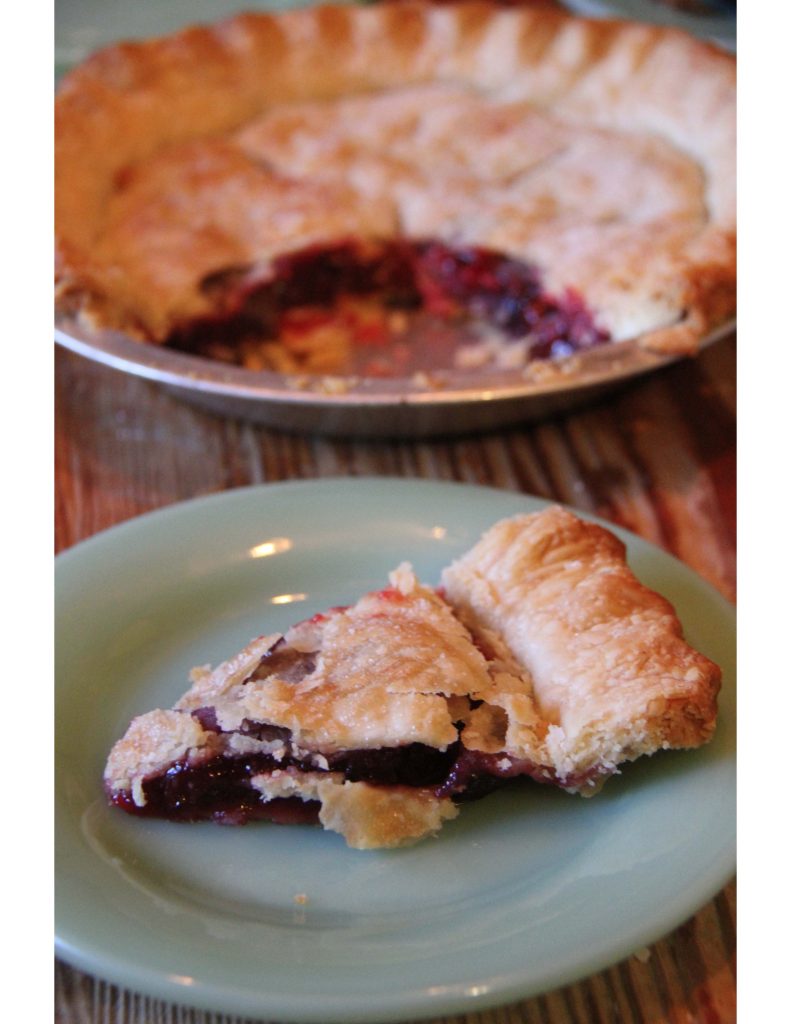 Paula Marcoux is a Plymouth food historian and the author of Cooking with Fire (Storey, 2014). She seems to think that you can make any space into a kitchen just by cooking in it.

Food For Thought • Put Your Money Where Your Mouth Is 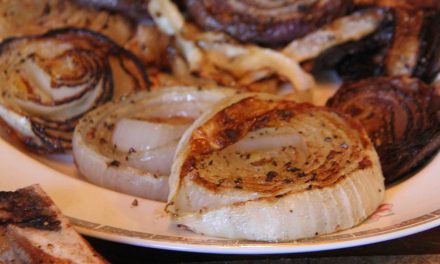 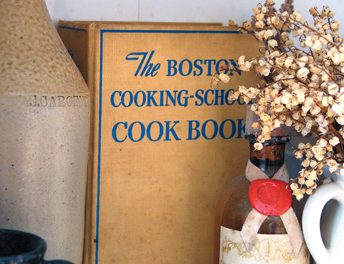 What Makes a Good Cookbook? 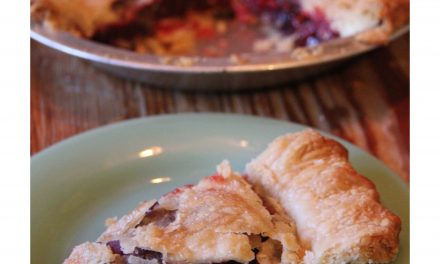