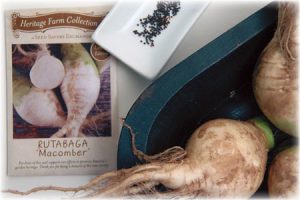 It’s that time of year again. As our earthly revolutions straddle the “Persephone period,” farmers and gardeners pour over seed catalogs, envisioning endless delectable possibilities for the upcoming season. Being a market grower, the anticipation of these catalogs causes me to toss and turn, and ponder; hmm…perhaps leaving a few frost-kissed parsnips by the mailbox will entice the Fedco fairy to come a bit early…

Startlingly few of us consider the origin of our bountiful season—the growing of the seeds themselves. For thousands of years, agrarian civilizations would traipse about their fields or gardens and select the best of their crops to steward along for the following year’s seed stock. With no knowledge of plant genetics, they laid the foundation for our sustenance. Selecting the best of the best entails much more than just picking the prettiest—when plants are grown in the same climate, along the same latitude, with the same general terroir, and the same pest and disease obstacles, they learn the locale. Over thousands of years, our ancestors fostered crops that knew their soil, providing us with the precursors to everything we eat. The seed catalogues we salivate over, an indispensable component for every farmer and gardener, are a very modern phenomenon.

The rapid development and growth of the seed industry have brought with it some extremely unsettling consequences and disturbing ramifications. In the past 100 years, over 90% of vegetable diversity once enjoyed by our grandparents has been lost. Gone forever. The introduction of proprietary ownership into the world of seed has resulted in a handful of multinational corporations controlling over half of the world’s seed supply—a deeply unnerving consideration since they are patenting and owning the latent life inherent in a seed. Furthermore, seeds are being grown on fewer and fewer farms, and selected to perform reasonably well over an ever-widening range of growing conditions. This is resulting in a startling erosion of place-based vegetables that know their soil, and possess the resilience and genetic diversity to endure changing climates and global interconnectivity.

By most historical accounts, the situation we now find ourselves in with regard to our food supply was not some premeditated diabolical plot The Man has ruminated over for decades, but rather a chain of (mostly) well-intentioned laws, bills, acts, and economic opportunities that created the zeitgeist of our daily plates. The USDA in its founding years had the primary responsibility of distributing seed packets—over a billion—to farmers nationwide, acting on the ethos that agriculture was the backbone of American society (which it was, until the dismantling of the family farm following WWII). Patents on seed varieties were created to encourage innovation among breeders and ensure their ‘novel creations’ were protected; though it has led to an institutionally-funded race for the next proprietary variety, and patents on traits such as the red hue of lettuce or the sweetness of a melon are now stifling innovation. Point being: this is the mess in which we find ourselves—no one person or entity is the puppet master behind it, though a few may have anticipated it and used lots of money to assuage it to their favor. After all, from the standpoint of good capitalism, what better business strategy exists than to control food? You’ll never go broke, even when people go hungry (case in point: the world today). 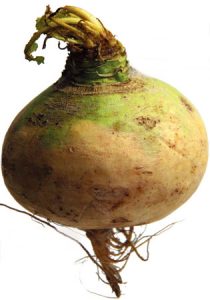 The Macomber Turnip: botanically a rutabaga (Brassica Naups), but called a turnip in Westport MA.

In the past 100 years, over 90% of the vegetable diversity enjoyed by our grandparents has been lost.
Gone forever.

There is hope. All of us who grow food on our farms or in our backyards have a living gene bank in the ground. Seed saving does not require an advanced degree in breeding and genetics; one need only have a few basic ground rules and a desire to do so. The return on investment transcends better and more flavorful crops—growing seed is a participation in one of the most vital acts sustaining humanity since the dawn of civilization. The sense of connection to place and plate, the awe of the miracle that is a seed, make it one of the most grounding, humbling, and fulfilling acts one can participate in. In select parts of the country, and worldwide, people are returning to the act of stewarding, saving, and sharing seed, borne out of a sense of wonder or duty, or both. In some cases, the chain of growing a particular variety has yet to be broken. 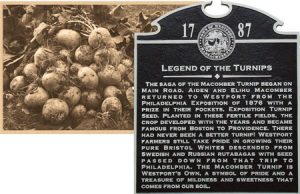 Which brings us to the Macomber turnip. Botanically a rutabaga (Brassica Naups), legend has it that it emerged as an accidental cross in a farmer’s field circa 1876. It is celebrated throughout southern New England by those ‘in the know,’ and finds its birthplace in Westport, being one of the few vegetables nationwide that has a plaque erected in its honor (keep an eye out when traveling down Main Road). In fact, legend also has it that one of the fields where my partner and I farm is where it was first grown. Ever. Though others have disputed this claim, we celebrate it and tell farm stand customers every chance we get. The previous farmer almost exclusively grew the Macomber. As a result, they come up in our fields whenever we till the soil, standing strong and proud along some of the most problematic weeds. In years of greater pest and disease pressure amongst other crops in its family, the Macomber turnip barely bats a lash. All this success before even mentioning that it is one of the most delicious root vegetables in the world—this is not just my opinion, but an observable scientific fact. Eat your core out, carrots.

What is so amazing about the Macomber turnip, on top of its stellar track record, is that it has been grown almost exclusively in Westport and neighboring towns for its entire existence. Until recently it was never listed in a seed catalogue. The seed stock has survived for nearly 140 years thanks to a handful of farmers and backyard growers in the Westport area who saved seeds because they had to; there was nowhere else to go for it. An old-guard, competitive mentality strongly discouraged sharing seed (I was told a story of a farmer pulling a gun on a trespasser in his field, who’d been intent on smuggling seed turnips). The Macomber turnip is a poster child par excellence for regional adaptivity; it may not grow well in Florida or Newfoundland, but around here, it grows like a weed—a farmer’s dream come true!

Witnessing the Macomber turnip seed tradition provokes the question of what else might grow well for seed in our area. Carrots, for example, are extremely tricky (they readily cross with Queen Anne’s lace, a wild sibling), but a myriad of other vegetables can produce a seed crop with little more than is required for growing them for food. Some are common for avid backyard gardeners—favorite varieties of tomatoes, peppers, and beans, for instance. But crops like arugula, under the right conditions, can linger in the garden and be left for seed harvest with a little know-how. Considering nearly all organic arugula seed is grown in Israel, chances are in your favor that saving a few generations of seed in your field will produce a far superior crop, not to mention that a few arugula plants can produce enough seed for years to come.

The current answer to the state of seed worldwide lies not in dismantling the current system, but in rendering it irrelevant. Mosaics of small farmers and gardeners have virtually all we need to ensure a diverse, resilient seed stock that stays in the public commons—and out of the hands of private interest—if we stand united and share our bounty with one another. To borrow the words, and the sentiment, of the post-WWII victory garden posters: “It’s thrifty, it’s patriotic—plant today!”

Bill Braun is a market gardener and seed saver at Ivory Silo Farm in Westport. He can often be spotted on Hixbridge Road plucking Macomber turnips and threshing beans with his darling dear. The Ivory Silo Seed Project aims to foster a regionally-adapted seed stock, using the farm as a hub for farmers and gardeners to learn, process, and share seed.