You had us at “Pie.” New England Pie; History Under a Crust is a culinary tour of New England history with an eye on pies, perfect for foodies and history buffs alike. Author Rob Cox takes the reader from Puritan beginnings, through the Revolutionary and Civil Wars to the present day. Cox’s research is extensive and always comes back to how the pie evolved and played a role in the region’s deep history. As far as we are concerned, there is no better way to learn about the area. Pie has been a New England favorite and staple since the early settlers baked it in the 17th century. As Cox says, “New England is a pie-loving culture, in a pieloving nation.” 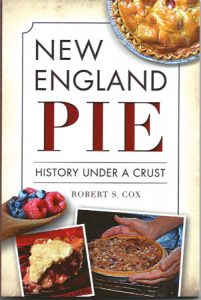 The book is organized by suggesting a type of pie, along with many variations, for each month of the year. January’s pie, for example, is a French Meat Pie, something your French Canadian grandmother might have served, as our food editor, Paula Marcoux’s “Mimi” did. The pie is a combination of savory meats and sweet spices and is the jumping off point for a lesson in the French Canadian assimilation into the early New England culture. These were challenging times given the different religious views and the tense relationship between the English and the French. While tensions have eased, thankfully, the pie stayed, becoming a traditional celebratory meal. Cox pays homage to the French Meat Pie by calling it a “border-crossing, language-defying pie.” I first learned about the meat pie, or tourtiére, in the eSS&SC Winter 2011/2012 issue, and found this chapter dedicated to the savory pie a welcome treat.

The recipes Cox unearths (a glimpse back in history) some of you may not want to try at home. February’s recipes, for example, include an 1807 recipe for the then popular Pigeon Pie—”a pigeon pie was typically made of eviscerated birds, whole or split in half….with a beef steak in the middle.” Fortunately, our forbearers had the sense to evolve this into a more palatable version. In fact, the recipe for Chicken Pie for Thanksgiving (from 1883 attributed to Miss A.M. Towne) is simply chicken, cream, butter and flour, a worthy and delicious base for any of today’s chicken pot pie recipes.

The history of Vermont and the maple sugar industry quickly becomes a lesson in abolitionism and the Civil War. New Englanders of that time looked to replace the southern staple, sugar, with northern maple syrup. The results were delicious! Cox includes a Maple Syrup Pie, Maple Apple Pie, and Maple Cream Pie, taking the best ingredients from the local area and making a celebration out of tapping of trees with a spirit of independence.

The famous Boston Cream Pie is a star in this book—with a nod to the grand Parker House in Boston, the hotel that put the Boston Cream Pie on the map as early as 1875. Cox goes into detail about how it evolved from George Washington’s favorite jelly pie, which was more of a layered sponge cake with jelly in between the layers. This cake was made famous in Boston during the patriotic tour of Washington’s compatriot, the Marquis de Lafayette, in 1825 when a young America was already nostalgic for the Revolutionary days. After various iterations along came Harvey D. Parker, who hired a French chef, added some chocolate to the layers and the rest, as they say, is history. The Boston Cream Pie as it came to be known, has been served at the Parker House ever since.

Original Recipe: Social Union Cook Book, 1900
One cup maple sugar, one egg,
half cup milk, or cream, butter, size of a walnut,
one tablespoon flour a bit of pepper,
beat all until smooth and bake with two crusts.
—Mrs. W. G. Simmons

And what book about pie would be complete without a recipe for Apple Pie? Cox saves that for the October chapter, cleverly entitled “A Most Persistent Pie.” And yes, in case you were wondering, Johnny Appleseed was a real historical figure, and did actually plant all those apple orchards. John Chapman traveled from Massachusetts through New York and parts of Pennsylvania planting whole orchards everywhere. Historians are not sure why he did this, but it did help in making the apple an all-American fruit, and the apple pie a delicious tradition!

New England Pie rounds out Cox’s trilogy of delicious history books including History of Chowder and Massachusetts Cranberry Culture. What a perfect ending for a satisfying and mouthwatering history lesson.