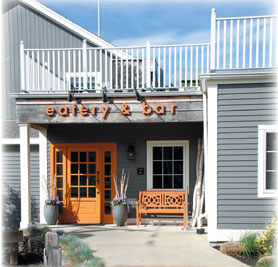 Although Rudy and Ron Vale, proprietors of The Corner Stop, were both raised on the East Coast, their restaurant coming-of-age happened in northern California during the nascent farm-to-table movement of the 1990s. The two worked together at one of the region’s notable restaurants and, as Rudy recalled, the staff would visit local farms, “to see the tomato growing in the field and then see the translation on the plate. You don’t have to fiddle with the food too much if the quality of the ingredients is there. To see that full circle really opened our eyes and made us respect it.”

After returning to the East Coast, the couple opened The Corner Stop in Hull in 2013, continuing their commitment to using locally grown and locally sourced ingredients. Produce from both Holly Hill and Norwell Farms feature prominently on The Corner Stop menu, as does fish from local waters. Chicken wings “angry and sweet,” tossed with a house-made agrodolce sauce, is a perennial menu mainstay, while avocado toast topped with Holly Hill sprouts is a seasonal favorite this year. With the vagaries of weather and crop production, farming is notoriously uncertain, so for restaurants where local foods play a major role, it’s crucial that restaurateur and farmer form a collaborative relationship. Ron is updated weekly about what produce will be available and for how long, allowing him to make decisions about what to feature on the menu, which changes every few weeks. And, when Jonny Belber, from Holly Hill Farm, delivered flowering arugula for the first time, it was such a hit Ron made sure Jonny knew they’d purchase it whenever available.

To help people understand how much care they take sourcing their food, the Vales highlight the farms on the menu alongside the items that they grew. Rudy points out that “People appreciate it because there is so much more consciousness about sourcing their food and where it comes from. More than anything, I think it’s a shorthand for sustainability, shorthand for quality, and that it’s just going to taste better because of the care that’s put into it.”