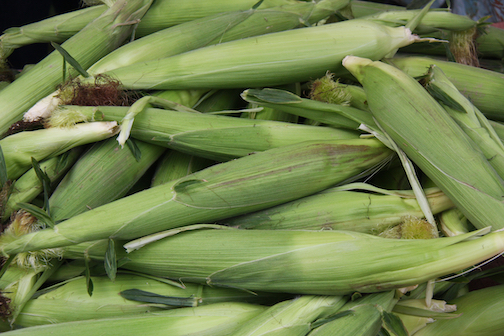 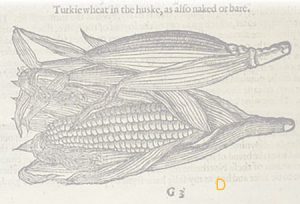 Back in 1822, when townsfolk used to write into the local newspaper to get answers to life’s important questions, or at least to seek editorial authority for settling neighborhood bets, the following query appeared in the pages of Plymouth’s brand-new weekly, the Old Colony Memorial:

“… whence came the Sweet Corn, and at what time was it introduced…”?

Hmmm, yes. Good question. To be honest, it was news to me that sweet corn could be documented to 1822, but there it was.

Here in flint-corn-fed New England, farmers let the crop stand in the field until fully dry, creating a supply to be processed into staples like samp and meal and hominy. Round about August, though, folks liked to enjoy a tiny portion of that annual crop harvested immature, boiled or roasted on the ear. That green corn was a pretty good late-summer treat if you cooked and ate it within a minute or two of gathering the ears. Any delay between field and fire was the difference between succulence and stodginess, as the corn’s sugars quickly converted to starch and its pulp desiccated to hard cellulose.

So this anonymous 1822 writer was crowd-sourcing to pinpoint the origin and local arrival time of the genetic mutation that allowed persistent sweetness in corn. Hah! Good luck to you, I thought. That one is liable to be “shrouded in the mists of time”, as they say. The history of plant-breeding is not the best documented of topics.

For millennia, humans have been manipulating corn to fill an amazing variety of agricultural and dietary niches. Since the crop’s inception in ancient Mexico, we’ve selected for traits we like, whether it’s drought-tolerance, short-season efficiency, or, in this case, sweetness. But as historians, our knowledge of the work of these past farmers tends toward the vague and general. We food writers get away with watered-down statements like: “Sweet corn originated when at some point some plant-breeder somewhere noticed a natural mutation that allowed the ears to remain sweet and tender much longer. Selecting for that mutation was the initiating step behind all sweet corns everywhere.”

Maybe today the latest gene sequencing techniques could provide more specific information, given appropriate physical material to analyze and a researcher who cares enough to undertake the project … and even then the answer would probably be something big and mushy like, “sometime in the nineteenth century.” 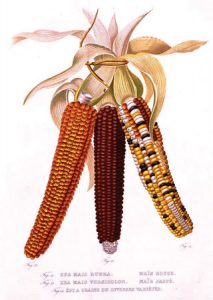 Turns out there was a disarmingly specific answer and it was printed in the following edition of the OCM. A reader (an articulate farmer with the handle Plymotheus) wrote in claiming to have been eyewitness to the arrival of an extraordinary seed-corn direct from the Finger Lakes region of New York, back in late fall of 1779.

So, what do you know? There really is an answer: the first crop of sweet corn ever enjoyed here in Plymouth was in August of 1780.

This new corn on the cob struck people as incredibly sweet, flavorful, milky and tender. The only downside for some fussier folks was that after being boiled and chewed bare, the “bright crimson” core “communicated an indelible stain”, when “laid in contact with any linen (the table cloth or a napkin).” But despite this “inconvenience” the new corn’s sweet mutation made it an instant hit, and “within a few years” it was “generally and extensively cultivated for culinary purposes”, according to our 1822 correspondent. Regular farmers like Plymotheus maintained their own seed supply, continuously selecting to maintain the sweetness trait.

In the commercial seed explosion in the following decades of the nineteenth-century, seed catalogs offered an ever-expanding range of sweet corn varieties for sale to farmers and gardeners across the land. Cookbooks, too, reflected the enjoyment of corn on the cob as a late-summer favorite up and down the social scale. While it was often sold as a street food, sweet corn was also known to grace the best tables in town—although the genteel might insist on grasping the corn with wee dainty doilies.

With the twentieth century came widespread advances in plant breeding based on the work of Gregor Mendel, then hybridization, super-sweet varieties and more genetic engineering, but you already know all about that. What interests me is how those first shriveled red seeds got here in 1779.

The path-breaking plant-breeders behind this sweet corn turn out to have been Iroquois/Six Nations People, a large population living in the vast fertile stretch that is now upstate New York, between the Hudson River and the Great Lakes.

A long-term alliance among these nations had kept them powerful enough to maintain cultural integrity and maintain control of their lands, despite centuries of pressure from French and English colonists. But at the outset of the American Revolution, the Nations’ homeland was squeezed between the hostile actors. Forced to take sides, the Six Nations broke their historic alliance, with four betting on the British juggernaut, and two siding with the colonial underdogs. A heart-breaking recipe for a brutal scorched-earth campaign in what turned out to be a most stomach-turning episode of the Revolution.

General Washington himself gave orders in May of 1779 to conduct total war on the Native allies of the British; in his words, “the country m(ust) not be merely overrun, but destroyed.” By fall, the land was a smoldering ruin: the crops, food supplies, and cattle destroyed, the people dead or driven to Canada, where thousands, provisionless, would freeze to death outside the gates of Fort Niagara when winter came.

Our national genocidal streak is not news, but it’s a bit of a takedown to see it deployed in a conflict we Americans like to think of as a noble and plucky uprising against overseas oppressors. Sadly, greed won out; when peace was negotiated between Britain and the United States, the Six Nations were not at the table, and lots of New England farmers were delighted to move west and take over all that great acreage.

In focusing as we must on its direct effects upon the human victims, we risk neglecting the collateral damage such policies of extreme violence have wreaked on our shared botanical heritage. But Washington spelled it out in the orders: “It will be essential to ruin their crops now in the ground and prevent their planting more.” That is, destroy all the seed.

So the tragic origin of this delicious corn is that it was looted from occupied territory, the spoils of a vicious campaign. Is it wrong to feel a debt of gratitude to the young lieutenant from Plymouth, Richard Bagnall, who did not exactly destroy every corn seed, but rather spirited some home with him? We will never know how he felt about participating in the destruction of “forty Indian towns and thousands of bushels of corn.” But we do know that he recognized a great thing when he tasted it, because, “…when Bagnall returned to Plymouth, he brought red-colored seed with him.” 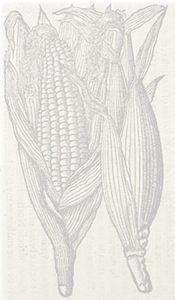 In the embers of a dying hardwood fire, lay fresh ears of sweet corn. While you wait and watch, think about the women of the Finger Lakes region—Seneca, Cayuga, Onondaga, Oneida, and Mohawk—who long ago started selecting seed for delicious green corn. Turn the ears now and again to roast evenly. Peel back the husks a little and have a look; dark spots here and there mean you are getting some delicious caramelization. I find butter and salt unnecessary, although nineteenth-century New Englanders would tend to disagree.

You can read most back issues of the Old Colony Memorial on microfilm at the Plymouth Public Library.

To learn more about massacres, battles, ambushes, and general destruction referenced in this column, search “Sullivan Campaign 1779”. You’ll find several primary source accounts, including descriptions of the agricultural awesomeness that was Western New York before the expedition destroyed it. 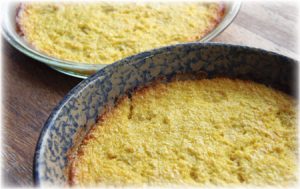 When you have eaten your fill of corn on the cob, try this simple and wonderful recipe, which bakes up just full of essential corn flavor. Twentieth-century Plymouth local historian Rose Briggs collected it from her New Bedford connections and contributed it to Four Hundred Favorite Recipes (Plymouth Woman’s Club, 1925):

Butter well 3 shallow pie plates. Grate – not cut – several ears, fresh, sweet corn – mix with 2 eggs well beaten, and thin if needed with cold, rich milk. Add pinch salt, and 1 tbsp. sugar. Pour into pie plates – dot with butter and cook in moderate oven. Cook until crisp on edges, brown on top, and so thick with the grated corn – that it is not like a custard. A shallow dish is important.

Preheat oven to 350 degrees F. Use about half the butter to generously coat 2 10-inch or 3 7-inch pie plates.

Mix up the rest of the ingredients (except the remaining butter). If the corn is very juicy you may not even need to use milk; the mixture should be just thin enough that the corn is submerged when it is poured into the prepared pans.

Serve hot or warm, with anything from a grilled steak to seared scallops to poached eggs to garlicky broiled tomatoes. Almost a dessert, too.

Paula Marcoux is the author of Cooking with Fire (Storey, 2014). She shares her enthusiasm for food, fire, corn, and more, through the Plymouth Center for Restoration Arts and Forgotten Trades. Find out the particulars and register for workshops at Plymouth CRAFT. 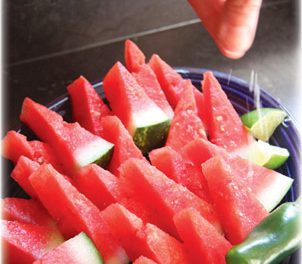 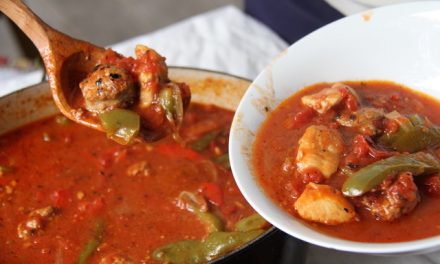 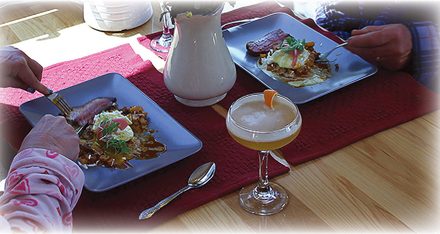 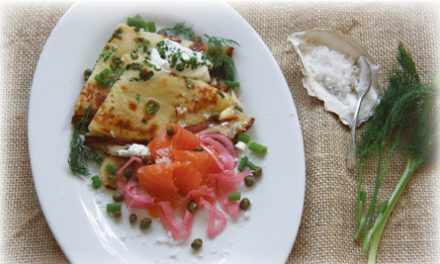