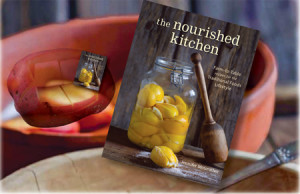 The “traditional food movement” is a sensible, fad-free approach to eating well. The premise, based on the research of nutritionist Weston A. Price, is a simple one. Eat real foods, avoid processed foods, and go for local ingredients. The ideas are borrowed from those who knew best—our grandmothers and great-grandmothers, who cooked from scratch and ate what was in season, embracing food as nourishment.

Jennifer McGruther’s new cookbook, The Nourished Kitchen, takes that straightforward approach and makes it gorgeous. This movement may be based on ideas from your grandmother, but this is not your grandmother’s cookbook. McGruther steps up the traditional and makes it seem gourmet with recipes like Pan Fried Trout with Chanterelles in Cream, which she says is perfect for a late summer supper when the streams and lakes “teem” with trout. Spot Prawns with Almonds and Garlic is nourishing as well as elegant and sophisticated. Traditional baked beans also get an update: Sweet Molasses Baked Beans with Bacon and Toasted Mustard Seeds.

Part of the magic of this cookbook is the way McGruther pairs food in combinations that are simultaneously creative and perfectly matched, such as Broiled Oysters with Bacon, Mushrooms and Spinach. “Marrying oysters with mushrooms allows the flavors of the sea and soil to come together in an extraordinary way,” says McGruther, which, when you think about it, makes complete sense in that farm to table way we love.

As the first cookbook to chronicle the traditional foods cooking culture, The Nourished Kitchen takes advantage of just how stunning fresh food can look on a plate, or in a jar or a well-worn wooden bowl. As McGruther says in the introduction, “Fruits and vegetables prepared in their season bring joy to the table.” She captures this sentiment beautifully in the photographs throughout the book. Sumptuous meals and ingredients are shown as close ups: an honest-to-goodness tribute to the bounty of good food.

As a food educator and creator of the popular food website thenourishedkitchen.com, McGruther is smart enough to realize that if she wants to lure folks back into the kitchen, the recipes have to be easy enough for just about anyone to understand. Home cooks will love The Nourished Kitchen’s one-page recipes with short ingredients lists. Roast Plum Ice Cream, for early September’s plums, uses some milk, cream, honey, eggs, sugar, and a bit of orange zest. Scrambled Eggs with Salmon Roe feels special, but can be made in a snap.

The book is organized according to the origin of the main ingredients. Chapters such as “from the garden,” “from the pastures,” “from the range,” and so on inspire thinking locally. McGruther’s farmhouse wisdom and nutritious food tips are scattered throughout the book, calling us all back to the kitchen and to our roots in celebration of delicious foods.

Reprinted with permission from The Nourished Kitchen, written and photographed by Jennifer McGruther (Ten Speed Press, © 2014).