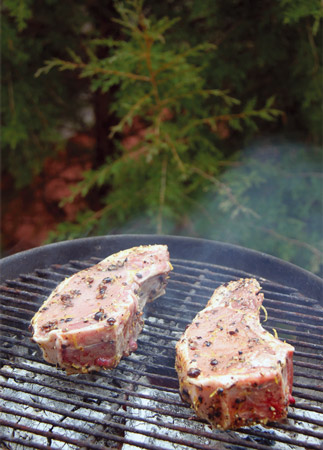 The first taste of an artisanal pork chop from a rare, heritage breed pig raised on pasture was a revelation: almost two inches thick, tender, succulent, juicy. The epiphany came at The Asbury, a restaurant within the historic Dunhill Hotel in Charlotte, North Carolina, whose chef/farmer/owner raised everything she served (except the seafood.) Pictures of her livestock hung on the walls. Curious about the good looking, rust-colored pigs, I asked for the name of the breed: Tamworth, one of the rare breeds threatened with extinction and considered “critical” for genetic preservation efforts by The Livestock Conservancy. 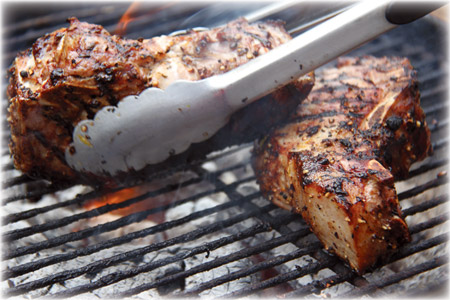 Most people never get to taste a pork chop like that, but the few who do rarely go back to low-priced commodity supermarket chops. There is just no comparison. Producing the highest quality pork requires specific breeds of swine genetics, raised outdoors, with lots of exercise on a diet that includes natural forage. During the growing season, this means a green pasture that offers a mix of grasses, legumes, and brassicas. The better the diet, the redder the pork will be—a rich red color is one visual indicator of quality.

Four years ago, I got into pig rearing as a way to help a nonprofit farm convert their unsold fresh produce and underutilized pastures into marketable protein. With no staff to manage a livestock operation, I went in whole-hog with a friend and we started raising animals for farm-to-table restaurants.

Breeding and Feeding Make a Difference

In the fall, when hogs are traditionally fattened before slaughter, a more varied diet can include pumpkins that were grown for Halloween, apples gleaned from orchard floors, and hard mast—acorns and hickories, sources of protein that add extra flavor to the meat and fat.

Nuts eaten by hogs in the weeks before slaughter lowers the melt point temperature of the fat so that it almost liquifies at room temperature. This allows intramuscular marbling to melt into dry cured meat as it ages slowly into salumi—Italian-style cured or preserved meats including prosciutto, coppa, and guanciale. In Spain, the Pata Negra breed of pig is finished on acorns for Jamon de Iberico, and in Northern Italy, breeds like the Cinta Senese are finished on chestnuts for Prosciutto di Parma. As the salumi ages, artisans baste it with melted leaf lard, the high-quality fat around the kidney that picks up a subtle nutty flavor from the mast. 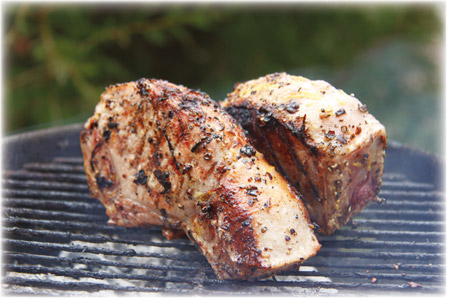 Resurrecting traditional methods of production requires going back in time to unlearn some (but not all) modern industrial practices. A science textbook, Swine Science 4th Edition, on swine husbandry published in 1971 includes a photograph of two pork chops side by side for comparison. On the left is what the industry portrayed as an undesirable pork chop (it is marbled, the color is red, it looks like a ribeye steak). On the right is a chop considered to be industry standard (no marbled fat, pale in color.) Its meat is bland in flavor and texture and dries out quickly. Over the past half-century, generations of factory swine genetics have been bred to perfect that standard, marketed by industry as “the other white meat.” As the caption in the 1971 textbook crows, “Breeding made the difference!”

To achieve leanness in the hog, scientists overcorrected nature and bred out too much fat. The fattiest swine bloodlines were called “lard types” for a reason. Until the latter half of the 20th century, lard was a common kitchen lubricant. Into the 1970s in kitchens of my Southern childhood, cans of bacon grease on the counter were ubiquitous. When margarine and cooking oils became cheap and accessible alternatives, the price of processed lard per pound brought less to a producer than live hogs on the hoof. Lard became a money loser, and thereafter marbling was bred out of American swine. At the same time, in the 1970s, consumers were told that any fat is unhealthy, even from animals raised outdoors on natural diets higher in Omega 3s than its counterpart. The result? Consumers reached for the leanest pork.

My chef customers who make charcuterie want a higher fat-to-meat ratio. A dry-aged prosciutto will lose 30% of its weight to evaporation as it ages for up to 24 months. Lean breeds of swine were not developed with these traditional, artisanal methods in mind. (Michael Ruhlman’s book, Salumi: The Craft of Italian Dry Curing, offers a good introduction with lots of photography.)

Producing animals for this specialized market requires growing a hog to a heavier weight. Most people slaughter hogs at six months or 225 pounds because it is easiest and least costly to raise piglets born after winter ends and taken to market before winter arrives. Ideal marbling in pork occurs when hogs grow closer to 350 pounds, which can take months longer and a lot more feed per pound after the animal’s rate of weight gain tapers down, reducing a producer’s profit margins.

The Tamworths I first encountered in North Carolina turn out to be very efficient foragers in woodlands, their natural habitat. They have legs and feet built for climbing and walking on soft ground, not concrete factory floors.

The Berkshire breed (black, with white feet, and white on the face and tail) enjoys cachet with discerning chefs who can taste a difference. My friend Marshall Bartlett, a Dartmouth-educated farmer in Mississippi who raises 1,000 hogs annually for chefs in New Orleans, crosses Berkshires with Tamworths. Crossing two breeds result in hybrid vigor and more rapid weight gain. Both breeds originated in England, where the temperate climate has similarities to ours in Southeastern Massachusetts. The native oak forest that hugs the border between us and Rhode Island is ideal terrain for these breeds.

Until last year, the hardest thing about raising pigs in this neck of the woods was obtaining slaughter dates at the limited number of processing facilities that serve small local producers. Plus, the few slaughterhouses in business were not equipped to process my large hogs properly. That got easier last fall when the non-profit Livestock Institute opened Meatworks in Westport, with its state of the art offloading chutes and pens designed by Temple Grandin, an expert in minimizing stress on livestock. (See article on page 45.)

Producing for restaurants is all about building relationships with chefs and owners who want the region’s farming ecosystem to thrive. Working with them allows me to produce to their specs. In the United States millions of hogs go to slaughter each week. I raise at most 25 hogs a year. For me, it’s not about volume. I’m simply out to produce the best tasting local pork any chef can put on a plate.

Carter Wilkie raises old English breeds of pigs in Little Compton, RI and has planted rare varieties of apple trees for 30 years. Ask for meat from his animals at the butcher counter at South Dartmouth’s Farm & Coast Market.