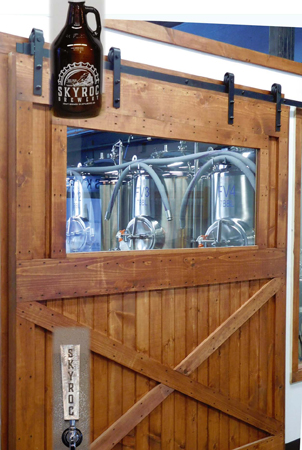 Tracey Cinelli believes in community. “We’re New Englanders at heart,” she states, in the warm darkness of her Skyroc Brewery taproom in Attleboro, MA. “We get together and shovel each other’s driveways.” She’s talking about community and family, and how one becomes the other, sometimes over the course of a few pints. The brewery is named for Tracey and her husband’s (who’s also the brewer) two children, Skye, 11, and Rocco, 7. Its Kickstarter campaign raised 131% of the requested funding, most of it from within the town and the immediate area, and a significant amount from people who had never donated to a Kickstarter before. But financial support wasn’t the only thing the neighborhood donated. “People brought means or machines to help,” Tracey explains. “You don’t see that every day.”

Skyroc is situated in the downtown area of Attleboro, a small city in the midst of revitalization. The brewery sits on the banks of the Bungay River, part of the Ten Mile River Watershed, and a block north of the commuter rail station. Housed in the old L.G. Balfour building, a former jewelry factory, the brewery has used some features of the original structure to its advantage. “They made Super Bowl rings here,” Tracey exclaims. “The vault used to hold $2-3 million in gold.” That same vault will eventually be the home of Skyroc’s barrel aging program. The original concrete floor has been sanded down to a brilliant shine, and Skyroc has embraced the industrial aesthetic with exposed beams at the ceilings, jelly jar lamps hanging from exposed conduit, and a slate bar back on which nondescript tap handles sit.

The brewery is making good use of the building and its surroundings for more than just aesthetics. One of their flagship beers is called 14 Karat, a golden ale, made to bridge the gap between American Pale Lager drinkers and the craft beer aficionados that will make the journey across I-295, or up I-95—also the names of two other Skyroc brews—to visit. The I-95 is a standard IPA, big and bold, with a distinctive hoppy finish. I-295 is the brewery’s session IPA, slightly lower alcohol by volume, fronted by a big hit of citrusy hop flavor. Skyroc honors family with their Red Skye ale, a honey-amber named after their daughter. Its 10 Mile River Coffee Stout pays tribute to the community, whose decades-long eff orts have contributed to cleaning up a waterway once known for its pollution. The beer is roasty, dark, and full-bodied, and helps round out a lineup that Tracey says has “a little something for everyone.”

Tracey opened her seven-barrel brewery in mid-March, to what has been a very supportive community. In fact, by the time you read this, you could be having a pint in the Skyroc taproom.

By: Matt Foster is a South Shore-based beer nerd. When he’s not writing about beer, or drinking beer, or brewing beer, or working (sigh… not with beer), he’s spending time with his wife, Lauren, and their two children.