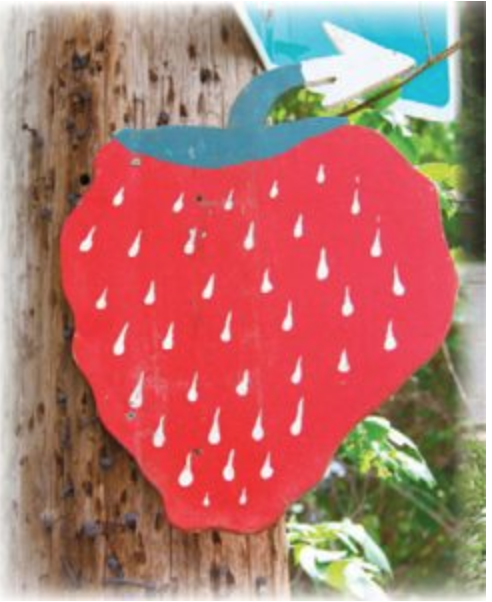 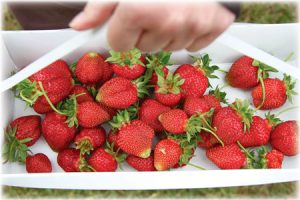 In the spring of 2004 my husband and I were new residents of East Taunton, having purchased our first home some six months prior. We were settling into our home and new neighborhood when one day we noticed wooden strawberry signs on all the trees. The signs stayed up for three weeks and then disappeared. Year after year, the same thing happened—the signs appeared, stayed three weeks, and disappeared. We never thought much of it until six years later, when our children were three-and-a- half and one-and-a-half years old. Looking for fun activities to embark on with the kids, I decided to investigate where those strawberry signs led. We didn’t know it that day, but following those signs was the beginning of an annual tradition and, we haven’t missed a year since. 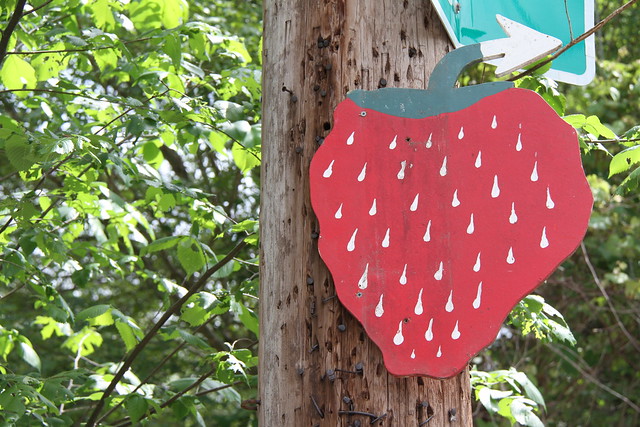 Hover over photo to see our album.

Spring Rain Farm is a 112-acre cranberry and Pick Your Own strawberry farm located adjacent to Taunton Municipal Airport in East Taunton. Originally a dairy farm, it has been farmland for generations and has also been used to grow corn. When the current owners, Bill and Mary McCaffrey, purchased the property in 1980 their original intent was to bring the parcel back to its dairy farming roots, supplementing their income by growing corn and hay. However, in 1983, The McCaffrey’s decided to plant their first cranberry bog, with three additional bogs following over the course of the next 14 years. The last addition, in 1997, brought Spring Rain Farm’s cranberry acreage to 11½ acres, and it wasn’t until the year 2000 and the crash of the cranberry industry that Bill and Mary decided they needed another crop to fall back on. 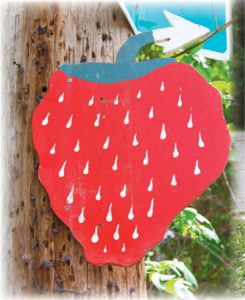 The idea for a PYO strawberry farm came from a friend of Mary’s who was also growing strawberries for PYO. In the spring of 2001, the wooden strawberry signs made their debut and the McCaffrey’s first PYO season was underway. Mrs. McCaffrey talks of those first PYO years very fondly. Ever present at the stand, she was kept company by her children and the folks who came to pick, many of whom had stories to share about the farm and the previous owners. Hearing these stories gave Mary a sense of history and connection to the land she and her family now worked. That inaugural season was small—just a little patch—but successful, and the McCaffrey’s decided to expand it for the next season.

Today, with two large PYO strawberry fields, Spring Rain Farm maintains that deep sense of connection and nostalgia. In the spring of 2009, as we visited the farm for the first time with our children in tow, I was immediately struck by the notion that I was taking a step back to a purer, less complicated time. Stone walls, hay fields, an old barn, small planes buzzing overhead while bumblebees buzzed at our feet, a pop-up tent with one attendant and a cash box, and two fields overflowing with ripe, red deliciousness— it’s absolute perfection! There is nothing quite like biting into a just picked strawberry, still warm from the sun, and the berries at Spring Rain Farm are the very best.

Every year as the end of May approaches, we eagerly await the arrival of the tell-tale strawberry signs and when they return, we make the most of the next three weeks picking 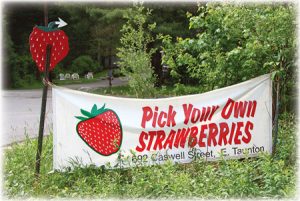 pounds and pounds of strawberries, visiting as often as possible. We eat so many, we end up with mouths full of canker sores—oh, but it’s worth it! We make jams and salads and our very own Strawberry Rhubarb Crisp. We indulge in all things strawberry. It has become a family tradition and one of our favorite times of the entire year.

Mingled with the excitement of strawberry season, I always find myself feeling a little anxious and hope to find the farm unchanged. Will it still feel like a step back in time? Will it still be that special place where my kids can independently explore the rows of fruit searching for the biggest, ripest, reddest berry yet? I have never been disappointed. The McCaffrey family is to be credited for their commitment to keeping Spring Rain Farm a place for folks to engage in an authentic, old-fashioned Pick-Your-Own experience. You won’t find hayrides or cotton candy or ice cream cones. You will find yourself taking deep breaths and connecting to the earth while memories of your own childhood surface. And you’ll also fall in love with this gorgeous place, and come home with the just the best strawberries and many beautiful memories.

Fortunately, the future of Spring Rain Farm is bright! The McCaffrey’s son, who kept his mom company at the farm stand for all those years, is now grown and working in agriculture. He is studying the science of fruit orchards and how to humanely raise chickens and grass-fed beef, with hopes of expanding the offerings at Spring Rain Farm one day soon. With the family’s commitment to keeping local produce affordable and accessible, these new ventures are sure to be a success. 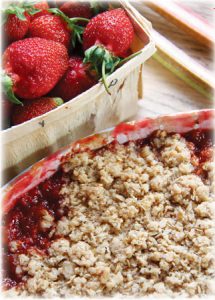 So, do yourself a favor, come the end of May keep your eyes open for those strawberry signs, and once you see them, don’t hesitate! The season is short and the berries go fast. We’ll be there for our annual step back in time, loving every second of our sticky fingers and red lips, canker sores and all.

Jessica Bradley is the mom of two very adventurous kids. She loves spending time with her family and dogs and cooking from her garden. Jessica can be found hosting the local cooking show, What’s Cooking in Lakeville.