A couple summers ago I worked on an organic farm at the head of Buzzards Bay, the exact point where the South Shore meets the South Coast. Ordinary weeding chores at Bay End Farm were occasionally enlivened by an archaeological find, bounced to the surface by a hard rain or shuffled up with a hoe: a Native projectile point, a fragment of stoneware, an English pipe stem. Not so surprising, as all sorts of people have been living, hunting, eating, drinking, and working in that beautiful neighborhood for millennia. One day, though, toiling among the lettuces, I brought up a steel and iron object I didn’t recognize. Covered in dirt and rust, the thing was solid, with the heft of a good-sized oyster; once thumped a bit cleaner on my boot, it was still unidentifiable. Farmer KofiIngersoll made me guess a while before he gave in and told me what it was: part of the conveyor system that had once been used to slide large freshly-harvested ice blocks up from the nearby pond onto wagons for transport.

Hmm. That one object made me begin to see the landscape a little differently.

Turns out that Kofi has a further connection to the earliest days of our local ice industry—he is the great-great-great- grandson of Frederic Tudor, ‘The Ice-King’ himself. Tudor was an unbelievably persistent Boston entrepreneur of the first half of the nineteenth century, returning from countless bankruptcies, and even a couple spells in debtors’ prison, to pursue, verging on maniacally, a pipe-dream business he was sure would someday make him a wealthy man. He essentially invented the idea of transporting our pond ice in bulk to booming tropical enclaves; developed the facilities to store the ice through months of heat; and cultivated a taste, even a need, for ice in locales characterized by high mean temperatures and ruled by people of high net worth. 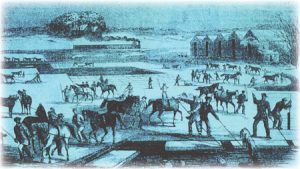 Frederic Tudor’s 1854 operation at Spy Pond in Arlington (then Cambridge). Note the melée of off-duty farmers and their horses, the huge ice houses, and the train passing on what is now the Minuteman Bikeway.

He was truly a visionary, pulling together widely understood, yet disparate concepts—small-scale local ice-cutting and storage; long-distance shipping by sail; international capital, accounting, investment and insurance; the usefulness of ice in food preservation and culinary novelty; the power of the consumer marketplace. Tudor mashed these ideas up, then went on to test, invent and improve every aspect of the business—packing, shipping, insulating, and marketing. He had a brilliant flair for persuading people that they had to have something they never knew they needed before. (He was the master of the old “first batch is free…” technique.)

For decades, Tudor was the butt of much ridicule at home and, frankly, wherever he opened his mouth. Until, that is, the day that his plans finally succeeded, and people were churning ice cream and drinking cold drinks in Savannah, Havana, New Orleans, Rio de Janeiro, and Calcutta. And other people—in southern New England, for example—were eating bananas, limes, pineapples, and coconuts. On that day, sometime in the early 1820s, Frederic Tudor had the last laugh.

Throughout, he masterfully dealt with the vagaries of business (yellow fever and revolution in his target markets, warm winters and trade embargoes back at home) and the maddening demands of customer service (the new retail client in Martinique who angrily returned with a damp bucket, complaining, “il fond…” — it melts). 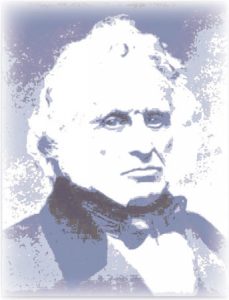 So, since we’re thinking about innovation in this issue of eSS & SC, what does Frederic Tudor have to tell us? After all, his life’s work transformed the diets and food acquisition habits of so many at home and abroad. For a century before widespread mechanical refrigeration, the ice business had profound effects on the landscape and people of New England. Harvesting ice employed thousands of men, horses, and oxen annually during farming’s downtime, late winter. Huge specially designed icehouses dotted city wharves, towns, and farms. A new concern developed about the cleanliness of ponds and lakes, with ice interests pitted against more polluting industries like logging and tanning. Fishery entrepreneurs started experimenting with keeping the catch on ice at sea, rather than salting it. And ordinary people discovered a love for ice cream and chilled drinks—specialties that were once the province of the wealthy.

For anyone impressed by the creativity and risk-taking of the entrepreneurs of our own era, Frederic Tudor’s story demonstrates that the innovator phenomenon is not a modern one. His empire rested on the harnessing of natural forces—like water freezing in winter and wind blowing around the oceans—by means of human industry and calculation. Even though he didn’t care one whit about it, the carbon footprint of his huge business was near-zero. True Yankee businessman that he was, he may have cared just as little that his obsession spawned widespread and considerable public benefits that were obvious to anyone. He professed that his only aim was to find wealth. Certainly he did not set out to enable the pina colada.

By the 1880s a culinary authority was able to write, “ice is as much an article of necessity with Americans as milk”. This delicious ice cream recipe, from a Plymouth notebook also dating to the last decades of the nineteenth century, is so constructed that the cook doesn’t need a churn, just a closed container packed in ice and salt (you can use your freezer). Containers of any size work for molds—if you use metal or glass, pre-freeze them for a half hour or so. Not that important if you just use yogurt containers like I do.

To learn all about Frederick Tudor, get The Ice King: Frederic Tudor and His Circle, by Carl Seaburg and Stanley Patterson.

For the ubiquity of ice in 1880s America and some wonderful ice cream recipes, see Jessup Whitehead’s remarkable tome, The Steward’s Handbook and Guide to Party Catering.

For Tudor genealogy, I consulted Volume 38 of The New York Genealogical and Biographical Record. The recipe for Coffee Mousse is taken from the manuscript notebook of Ruth Spooner Baker, and used with the kind permission of the Plymouth Antiquarian Society. 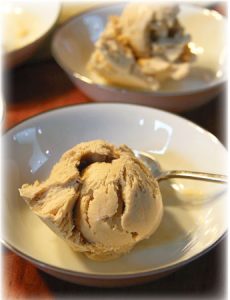 Paula Marcoux is a Plymouth-based food historian and the author of Cooking with Fire (Storey, 2014). As an unintended consequence of writing this column, she will be presenting a hands-on workshop on Federal-period ice creams at Thomas Jefferson’s Monticello this September.