EDIBLE NATION • The Pig Next Door

by Barry Estabrook
{with commentary by eSS&SC} 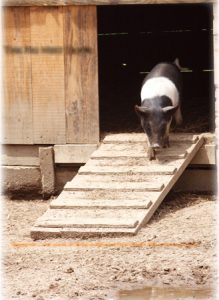 “Pork raised by small farmers near home is the very best.” –Barry Estabrook

Several years ago, I bit into a chop that caused me to all but eliminate pork from my diet. It wasn’t that the chop was bad. On the contrary, it was transcendental: rich, juicy, fatty, and sublimely piggy. {Like pork you had as a child.} Compared to the commodity meat at the supermarket {produced on an industrial scale with lowest-cost being the highest priority}, it was like an August heirloom tomato picked from the garden versus a pale, imported January facsimile. I lost my taste for the factory-raised “other white meat.”

I also became determined to find out how meat from pigs could be so different—and how I could secure a dependable supply of great pork for my own table.

A little sleuthing revealed that the pig that produced the chop responsible for my epiphany was an old-fashioned heritage animal bred for flavor, not cookie-cutter leanness. It had spent its life with about 300 fellow hogs on the rolling pastures and woodlots of a small farm about an hour from my Vermont home. It had cavorted, rooted, wallowed in mud baths, snoozed in the summer sun, and dined on a plant-based diet. Its manure made the vegetation richer for future pigs.

As I got deeper into my quest, which by then had become a book project, I spent a memorable day {not in a good way} with a pig farmer in Iowa. He raised 150,000 hogs a year that produced meat of the sort that makes up 95 percent of the pork Americans consume (95 percent!). To prevent my bringing in diseases, I had to strip naked, shower, and put on special clothing, as did the owner and everyone else who entered the facility. In one dimly lit barn, more than 1,000 sows spent their entire lives in metal cages too small for them to turn around in or even contain their swelling, pregnant bellies. Piglets were raised indoors in groups of twenty or so in enclosures too small to allow them to take more than a step or two in any direction. The floor was slatted concrete that allowed the feces and urine to dribble into a basement-like pit directly below, where it accumulated, creating an eye-watering stench and emitting gaseous ammonia and hydrogen sulfide that would have killed every pig in the barn were it not for jet-engine-sized ventilation fans that blew the fumes outside, causing the air to reek for miles around. {Wait. What? Read that sentence again slowly.} The hogs’ commercial feed included “animal protein” rendered from dead pigs, chicken litter (feces), and “feather meal” from poultry packing houses. {Gross.} Their feed also contained antibiotics, a practice that breeds resistant bacteria that kill 23,000 Americans a year. {This is why our antibiotics aren’t as effective as they used to be and how ‘super germs’ are being created. See the eSS&SC Resource List we’ve created on the topic.}

My taste buds were obviously trying to tell me something.

At first, finding pork that met my new standards involved effort. I could order it online from a few suppliers such as Niman Ranch, which entailed shipping costs and more advance planning than I typically give to weeknight dinners. Then one Saturday morning, I noticed that a cheese maker at the farmers’ market I frequent had a cooler full of frozen pork. She told me her animals were free range {not in cages} and fed a vegetarian diet mixed with whey left over from her cheese operation. I became a customer. Around the same time, a few conscientious chefs in the area made deals with farmers to produce hogs, which they would buy whole and break down into an array of tasty, often imaginative dishes.

After listening to the stories of these chefs and farmers and visiting a few swineherds, I settled on a simple principle: By any criterion—environmental, ethical, and gastronomic—factory-raised pork is the worst meat you can eat. By the same token, pork raised by small farmers near home is the very best.

A year or so ago, the long-time meat manager at a nearby supermarket saw that an increasing number of his customers came in looking for the same sort of meat that I sought. He left his job, purchased a USDA-compliant mobile slaughter truck, and opened a meat market about ten miles down the highway. Demand was so brisk that he soon opened a second store not much farther away up the road. For me today, getting great, local pork requires no extra effort, regardless of which direction I drive.

You may not be as fortunate—yet. But in my travels, I have noticed that pork and other meats are on offer at more and more farmers’ markets {click here for our local list}. Web sites such as Eat Wild (eatwild.com), Food Alliance (foodalliance.org/client-search), and Slow Food USA (www.slowfoodusa.org/local-chapters) have national listings of small, sustainable pork producers that can guide you to well-raised pigs living near you. Get to know them, but be warned, you may never visit the supermarket meat counter again.

Barry Estabrook is the author of Pig Tales: An Omnivore’s Guide to Sustainable Meat.