The ancient Greek physician Hippocrates, the “Father of Western Medicine,” who incidentally, proclaimed, “Let food be thy medicine,” is said to have insisted that his first hospital be built by a stream so that he could grow and harvest watercress to treat and feed his patients. Watercress is a wild edible containing more than 15 essential vitamins and minerals, making it a local superfood. Jo Robinson, author of Eating on the Wild Side: The Missing Link to Optimal Health, suggests that our modern-day industrial farming practices are depleting the soil in the U.S., thus robbing many formerly nutrient-rich vegetables of valuable nutrients. There is a growing school of thought advocating for an increase in the consumption of wild edibles.

Enter Marshfield’s Bill Frugoli. He grows watercress, which he sells at the Marshfield Farmers’ Market during the spring and summer months, on land that abuts the North River. Runoff from an artesian well located on his property flows through the marsh and out to the ocean, providing ideal conditions for growing watercress (their roots need to be submerged in water). The watercress grows so abundantly that Mr. Frugoli often uses his weed-wacker to keep the plant, which some consider to be an invasive weed, from choking off the water running from his well.

When Bill’s father owned this Summer Street property in Marshfield during the 1940s, a local farmer would pass along his excess watercress to feed the Frugoli ducks. In this way, watercress came to be seeded on the land. When left to flower, watercress produces numerous tiny seeds and is an avid self-seeder. After Bill took over the property and cleared away the brush, the watercress blossomed. Although his watercress grows year-round, it is dormant during the winter. Leaves and stems are most flavorful in the spring, making this the ideal time to buy, harvest, or forage watercress.

Perhaps best known, along with sweet cucumbers, for its place in the classic English tea sandwich, watercress has a peppery kick. Similar to arugula, watercress makes a tasty addition to salads, soups, and stir-fry or an accent to many fish and chicken dishes.

Look for Bill selling his watercress at the Marshfield Farmers’ Market in the spring and consider giving this tangy and nutritious green a try.

Katherine Rossmoore is a mother, integrative health coach, writer, former lawyer, and certified yoga teacher. She is using her love of clean food and cooking in her health coaching business. 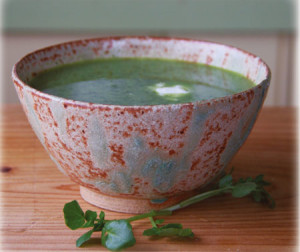 “This just vibrates with fresh flavors.”