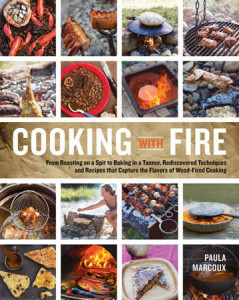 Q: Your new book Cooking with Fire is filled with recipes and techniques that, as the subtitle says, “Capture the Flavors of Wood-Fired Cooking.” Some of those techniques require building structures. Is this book only for the adventurous cook or are some of the techniques relatively simple?
A: The short answer is BOTH—Cooking with Fire is calculated to bring out the adventurousness in cooks, AND most of the techniques are pretty simple, if unusual.
While it’s true that the book culminates in a chapter on building and using a basic wood-fired oven, I spend the first four chapters outlining some of the many ways to cook great food without that much commitment of time and resources. For example, if you’re interested in making great bread, you really needn’t go to the trouble of building an oven first. An iron kettle bakes super bread in a campfire or fireplace. And some of the best breads in the world come off a griddle, and that can consist of just a scrap of iron propped up on a couple of bricks. You can even just bury a lump of dough under a pile of hot ashes and get an edible, if idiosyncratic, loaf of bread. For me, the fun really consists in doing the most with the least. 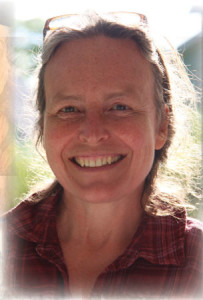 Q: Do you firmly believe that food cooked with live fire tastes better?
A: Food that involves fire is not only likely to taste great, it’s also that much more engaging and fun to produce. Fire draws people into the process, makes them want to try new things and participate in the magic themselves.

Q: What is your favorite technique and recipe from the book?
A: I always like to mess around with cooking techniques I find in historic works, but when it’s just for fun, I don’t have to be very systematic. The need to approach things comprehensively for Cooking with Fire forced me to try stuff I had long resisted. I mean, some ideas or flavor combinations just don’t seem like they could possibly work out. Turns out I was dead wrong about some of those prejudgments. I’m very grateful that these trials added all kinds of new tricks to my repertoire.
I think my favorite in terms of just plain crowd-pleasing fun has to be Flip. The key tool is an iron fireplace poker that you superheat in the coals of your fire. Pour a beer, a shot of rum, and a tablespoon of old-fashioned molasses in a sturdy large mug or heavy glass (not an heirloom). When your poker is literally redhot, immerse it in the drink and enjoy the sights, sounds and smells of some crazy instant seething and searing. When it has heated and caramelized to your liking, just sip and savor a drink locals around here loved back in the eighteenth century.

Q: As an archaeologist, food historian, and lover of past traditions you look to the past for food inspirations, but do you ever get excited for modern techniques? Do those even exist? Or is everything derivative?
A: The world archive of past foods is so vast and exciting that I’m sure I’ll never really catch up to the present. There’s just so much to think about and to try out from history’s kitchen.
And it’s not just me, I’d like to point out. A great deal of the exhilaration in today’s food world involves the rediscovery of tastes and techniques from the days before industrial feeding began to wipe all culinary diversity from the face of the planet. In the last couple of years, we’ve seen the hottest chefs on the globe swing from unabashedly modern “molecular gastronomy” to foraging for lichens and seaweed, foods that were most recently trending at the end of the last Ice Age.

Q: Is there a modern cooking “gadget” you don’t want to live without?
A: I love my rice-cooker, but in terms of learning stuff, the answer is the Internet. For example, I’ve picked up tons about doughhandling from watching YouTube videos of Malaysian street cooks, Iranian bakers, and Armenian grandmas. It’s incredible.

Q: Do you have any comical anecdotes in regards to the process of this book coming together?
A: On the very first day of eleven intense days of photography, before the team and I had gotten to know each other very well, Storey Publishing art director Alethea Morrison wanted to get a picture of the perfect mortar mix for oven building. I was really absorbed in the oven-building process and distractedly handed her lumps of my clay and manure mix—one too dry, one too wet, and one “just right.” She and photographer Joe Keller (of Kingston) ran off with them and I never thought about it again until I saw the finished shot—they managed to style it so beautifully that the three dungy lumps of dirt look like hors d’oeuvres on a serving tray. THAT’s when I began to realize that I was dealing with some pretty special artists. 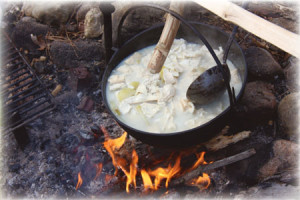 Paula Marcoux lights up a room, builds her own ovens, and fires up a cooking pit.

Q: If time travel were possible, what century or specific time period would you like to live and eat in? You can only choose one.
A: This is very hard for me as my areas of interest are so diverse. Thus, paradoxically, my choice will be very specific. I believe I’d like to sail around the world, eating and drinking with the amazing Charles H. Baker, Jr., as he “researched” his remarkable Gentleman’s Companion volumes in the 1930s. Educational, as I’d get to drink with Hemingway and Faulkner as well as the witty and charming Mr. Baker and to dine in Java and Singapore and Suez and Caracas back when they were really different worlds.

Cooking with Fire: From Roasting on a Spit to Baking in a Tannur, Rediscovered Techniques and Recipes That Capture the Flavors of Wood-Fired Cooking.

Aja Amontea is a writer, floral designer, social media strategist, and grocery enthusiast. She shares her passion for good food with her husband and son at their home in Weymouth.