The Evolution of an On-Site Recycling Factory

The seed was planted back in 2011, with a composting demonstration held at Hingham High School. Envision teenagers (over 1,000 of them) suddenly being asked to care for their food scraps at the end of lunch. Requiring students to toss a plastic bottle in the recycle bin is not a big deal, but asking them to properly dispose of peels, rinds, and sometimes-unidentifiable school-lunch remains … well, that could have questionable results. 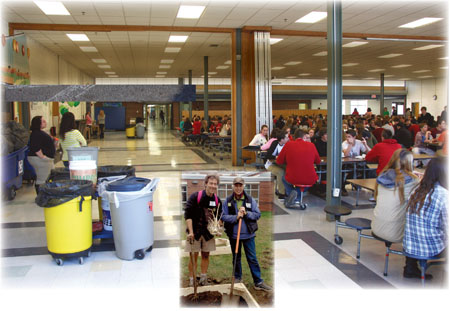 The composting demonstration was part of Hingham High School’s annual America Recycles Day teach-in. Coordinated by Janice McPhillips, a Farm Educator at Holly Hill Farm in Cohasset, the event featured a recycling station in the school cafeteria. Students were encouraged to separate lunch waste into the proper bins: paper bags, bottles/cans, food scraps, and trash. According to Assistant Principal and Green Committee Chair Rick Swanson, the success of this initial demo resulted in an ongoing partnership with the Friends of Holly Hill Farm. The Friends have similar partnerships with 25 local schools, providing custom programs that benefit students while advancing the school’s educational goals. Three years later, that seed has taken root and grown into a composting program that not only reduces waste, but also generates funds and provides a sustainable resource that can be utilized in ongoing efforts to reduce the school’s impact on the environment. The project has evolved into an onsite recycling factory, a term used by McPhillips, who is also a member of the Green Committee. She observes that “most kids know to toss their plastic water bottles into the recycle bin, but they don’t really know where the bottles go… They’ve been told that bottles are transformed into things like toothbrushes or park benches, but they have no tangible proof. When done successfully, a composting program provides a hands-on, full-circle approach to recycling.”

Since composting involves some potentially icky elements such as decomposing food scraps, fruit flies, and worms, attempting to change the habits (and attitudes) of 1,135 teenagers was no easy task. Tackling the “gross” factor required some creative collaboration. Hingham Senior and Green Committee member Gray Kinsella was instrumental in working with the school’s TV production class to create content for The Friday Show, a popular weekly program devoted to student-produced videos that airs in every classroom on Friday mornings at 9:00. The program’s humorous-yet-educational content provided students with the basics of how to compost lunch waste. According to Hingham High Science Director Katie Roberts, “Watching The Friday Show is the only time during the week when the entire school community is doing the same thing. The shows are entertaining, which was key to getting the kids’ attention and to encouraging students and faculty to participate.” 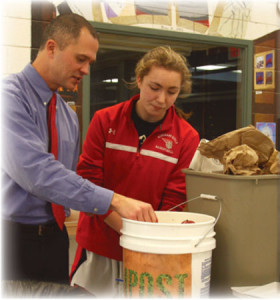 Assistant Principal Swanson, a very popular administrator and the consistent force behind the school-wide effort to improve environmental awareness, welcomes ideas and participation from the entire community. Shop students built the first compost bin from chicken wire and wood scraps. School custodian Matt Conway created a convenient area outside the cafeteria to house the bin. As students began to compost, the bins quickly filled to capacity and more were needed. McPhillips arranged for a donation of bins from MassDEP (available for free to any school that registers with the state’s Green Team program), and the utility area outside the cafeteria was expanded to accommodate the delivery. The school now utilizes a dozen bins, in various stages of decomposition, which provide a steady supply of finished compost. With regular guidance from the Holly Hill Farm educators, students screen, bag, and sell the compost at plant sales and the Hingham Farmers’ Market. Proceeds are used for Green Committee initiatives. 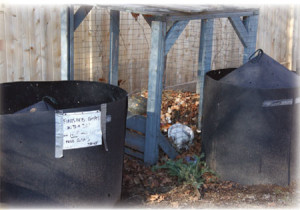 In addition to the initial bin, shop students constructed raised garden beds using wood reclaimed from a building project at the middle school. Other students removed grass, cultivated soil, readied the beds with finished compost, and planted. Garlic has proven to be the most successful crop, with rhubarb, asparagus, and other perennials currently under consideration. 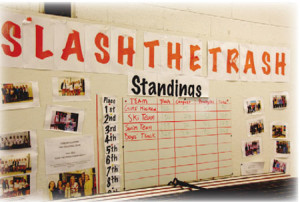 Success, however, created an unexpected challenge. The large number of plates quickly overwhelmed the compost bins, and disrupted the balance of greens and browns required for proper decomposition. Some creative thinking by members of the Green Committee resulted in a collaboration with the town’s composting program, which collects yard waste and makes finished compost available to residents. The overflow plates would be added to the town’s compost pile. According to Swanson, “In exchange for a weekly delivery of plates to the Transfer Station, we offered a prime, reserved parking space in the school lot to a student with a truck. The arrangement has worked remarkably well.” 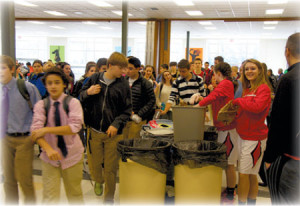 A significant step in encouraging the students to take ownership of the program came with the introduction of Slash the Trash, a friendly competition between athletic teams designed to increase participation in the composting effort. Teams “compete” against one another by encouraging students to compost food scraps and recycle bags, bottles, and cans when they have finished eating lunch. Members of a designated Hingham High School athletic team wear uniform jerseys to school on a specified day and become the cafeteria compost ambassadors. Competitions run seasonally, providing an opportunity for all teams to participate. The mission is to fill up the recycling and composting bins while keeping the trash barrel as empty as possible. Kate Freda, a member of the girls’ soccer team, states, “students definitely feel more pressure to cooperate when teams are encouraging kids to compost and recycle.” 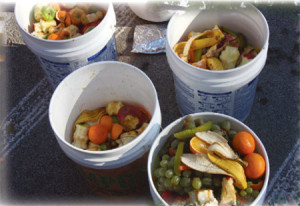 Swanson has devised a proprietary formula for keeping the competition fair, since some lunches, like pizza, don’t leave much for the compost bin, while less popular lunch options often get tossed and result in a lot of compost. He personally weighs the trash and the compost at the end of each lunch using a bathroom scale. Daily totals (by weight) are posted to a board displayed in the cafeteria, allowing the entire school community to track the standings. According to Swanson, the board helps to stoke the competition between teams and educates the students on how well they are doing in the quest to lower the amount of trash generated during lunch. The team with the lowest trash weight at the end of the season receives a complimentary buffalo-chicken calzone lunch provided by local favorite Crow Point Pizzeria. Although the goal is to have as little trash as possible head to the dumpster, Swanson noted an unexpected bonus: “We’ve been able to raise awareness. The kids realize how oblivious their friends are to thoughtless waste. We’re hoping to help build better habits that will last longer than lunch. 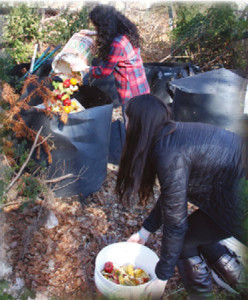 GianLuca Nigro, a junior, credits Mr. Swanson’s persuasive recruiting efforts for his participation on the Green Committee, as well as for the success of the program: “His enthusiastic attitude is really hard to ignore.” To keep the composting program from creating additional work for the custodian, Nigro and a group of students volunteer to take the compost out to the bins during their study hall.

Swanson is quick to admit, “The program is certainly far from perfect. With over one thousand teenagers eating in the cafeteria every day, recycling is an ongoing challenge, but pound by pound the kids are making a difference. We recently hit a milestone, with compost for the day weighing more than the trash.” McPhillips added, “While [I was] teaching a class at the compost bin, the garbage truck arrived. The two dumpsters are usually full of trash, but one was empty … a terrific visual lesson to show the kids that they are reducing trash.” 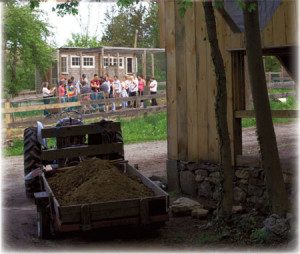 McPhillips’ vision of an onsite recycling factory is being realized. Students and faculty can see the full circle of recycling: food scraps and compostable plates are collected from the cafeteria, coffee grounds from the front office, sawdust from the shop. All are mixed into the bins. Finished compost is screened and either used in the school garden to amend soil or is sold to the public. Produce from the garden is used in culinary classes and cafeteria tastings. Keeping it local and being part of the process allows students to see the value in tossing their food scraps into the compost bin rather than the trash.

Lori Rohleder is an (admittedly) on-again, off-again, composter who resides in Hingham with her husband and teenage sons. She is also a devoted fan of Holly Hill Farm.