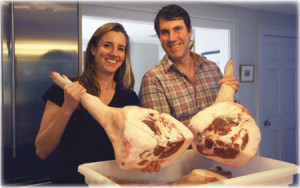 Amy and Sam Hainer are able to sell cuts of meat from their pigs at Pokatimus Farm.

New homeowners often have big plans for their backyards—a stone patio, a garden, or perhaps a pool. When Amy and Sam Hainer purchased their Norwell home four years ago, they too had big plans for the space out back. But, since their property is bigger than most—five acres to be exact—their plans were a little more ambitious. Amy dreamed of having a farm. So, after years of often grueling effort, Amy and Sam fashioned a small-scale farm on their property. Named Pokatimus (POH-cah-TIH-muss), the Algonquin word for the white oak trees that dot the property, the farm is home to six pigs, five goats, five chickens, and a robust garden. Along the way, the Hainers developed a new passion, becoming intrigued with the culinary tradition of charcuterie. And, since they were raising their own pigs, it was a match made in, well, hog heaven.

Both Amy and Sam were raised in Norwell. Neither is from a farming family, but early on Amy felt a great kinship with animals. As a child, she wanted to be a veterinarian, and after college she lived on a New Zealand sheep farm, happily pitching in with shearing and other chores. That farm also raised chickens and grew vegetables. According to Amy, “I was getting all my food right there. I didn’t have to go food shopping except for the basic essentials like flour. That was a big influence on how I wanted to live in the future, being able to sustain yourself on your own piece of property.” Luckily, Sam came to share this goal and they launched Pokatimus early in 2010.

Now, like many farmers, the Hainers live dual lives, working full time in other professions while farming in their off hours. In fact, according to the 2007 Census of Agriculture about 50% of farmers report something other than farming as their primary occupation. Amy is a Senior Designer/Project Manager at Peabody Office and Sam is Director of Finance & New Business Development, Higher Education at Harvard Business Publishing.

As the Hainers were starting their farm, they found the Livestock Conservancy website (www.livestockconservancy.org), which introduced them to heritage breeds. The Conservancy aims to preserve rare livestock breeds, so that genetic traits that have been bred in these animals over hundreds of years are not lost. Because industrial farms generally raise only a couple of breeds, usually chosen for their high production of meat, milk, or eggs, preserving genetic diversity has become increasingly important. The preservation work being done by the Livestock Conservancy resonated with Amy and Sam, and thus over the years Pokatimus Farm welcomed several rare breeds, including Arapawa and San Clemente goats; Tamworth, Tamworth/Saddleback cross, and Ossabaw Island hogs; and Buckeye and Partridge Plymouth Rock chickens.

This commitment is not easy or cheap; the Hainers often had to drive hundreds of miles to purchase these rare breeds and pay the steep price that reflects the scarcity of these animals. The Ossabaw Island pigs they raised this year cost $200 each. As Sam pointed out, “If you purchased pigs from the guy down the road, you’ll probably pay $50-75 a pig.” They believe the premium price is worth it, both for the higher quality of the meat and to help in the important work of preserving rare breed animals. The lives of the animals on Pokatimus Farm are worlds away from their industrially raised brethren; with large pens in the woods, the pigs are free to roam and root and the goats to run and buck.

Charcuterie appealed to the Hainers because, as Amy said, “we were raising these animals and didn’t want there to be any part of them that became waste.” Charcuterie is a centuries-old method of food preservation that evolved at a time when meat was scarce. Frugal cooks learned to use every part of the pig to help keep their families fed, including the cheeks (to make guanciale), the head (terrine), offal (terrines and pates), stomach (pancetta or bacon), and legs (hams and prosciutto). There are two primary methods of preparing charcuterie: wet curing, or brining, and dry curing. Salt is a critical part of the preservation process, and various herbs and spices can be added to change the taste profile. Over the centuries, different cultures have put their own spin on charcuterie, which is how the German frankfurter, Polish kielbasa, and Spanish chorizo evolved. 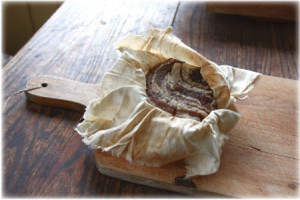 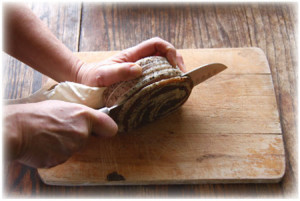 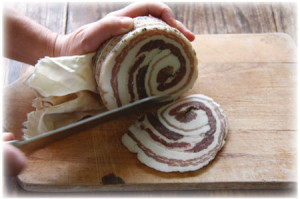 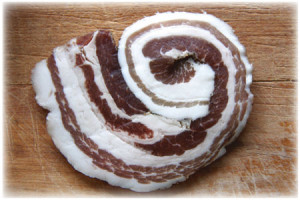 Recently, this age-old craft has undergone a renaissance, with artisanal charcuterie makers all over the country reintroducing people to these delicious foods. In order to learn how to make the many and varied charcuterie products, the Hainers read many books and Amy travelled to New York City to take a series of classes at the International Culinary Center. There was much to learn. For example, making dry-cured charcuterie is a delicate balancing act where both temperature and humidity must be frequently adjusted as the meat ages, and each step is important to ensure both taste and food safety. But just one taste of their prosciutto is testament to the fact that the Hainers have mastered this art.

The Hainers dream of one day selling their charcuterie to the public, but at this time they can only make it for their own consumption and to share with family and friends. Although their pigs are slaughtered in a USDA-certified facility, in order to sell their charcuterie products, the meat would then have to be prepared in a USDA-approved processing facility. Unfortunately, there is no local certified facility that will dry-cure meat from small-scale producers. While there are companies doing this small batch work for farmers in Vermont, the added transportation costs make this an unrealistic option for the Hainers. As interest grows in artisanal charcuterie, let’s hope that more USDA-approved facilities doing this kind of work will be established in our area.

Luckily, the Hainers are able to sell cuts of meat from their pigs and, each fall, their loyal customers gather for the annual sale. This fall, thanks to the culinary cachet heritage pork now enjoys, a Boston restaurant purchased three whole Pokatimus pigs.

Both Amy and Sam acknowledge it is difficult to raise animals with such loving care, knowing they will ultimately end up as food. But, as Amy says, “When eating a factory farmed pig, you feel guilty about the life they have had.” Thanks to the way they were raised, the Hainers have no such guilt about their pigs. Amy put it best: “We know they have had a great life.”

Some local sources of handmade charcuterie include the Bloomy Rind in Hingham, Smokehouse in Norwell, and Sausages Homemade and Natural in Hanson.

Peter Kaminsky, Pig Perfect: Encounters with Remarkable Swine and Some Great Ways to Cook Them (Hyperion, 2005).

DVD: River Cottage–Pig In A Day. With Hugh Fearnley-Whittingstall

Julia Powers has long been a fan of charcuterie and the rich flavor it adds to soups, pastas, and braises. In the spring, when tender greens finally make their reappearance, she likes to serve salad topped with crisped prosciutto and blue cheese. Ah, heaven.