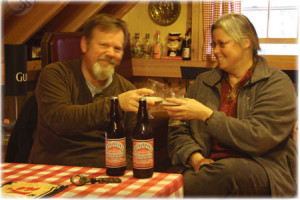 Toasting and tasting their delicious brew, Paul and Rose enjoy a celebratory moment.

Deep in the recesses of a Plymouth cul-de-sac, strange and wonderful things are afoot. Paul Nixon, a newly-commercial microbrewer—make that nanobrewer—is taking advantage of his LACK of scale to ferment delicious products out of mostly Massachusetts ingredients. He is sourcing his malt and hops from as close by as possible—which for the former means the western part of the state, but for the latter means as near as Garretson Farm in Marshfield. He hopes to forge more relationships with local farmers in time, because as his product line and volume grow, he’ll need MORE of everything.

Paul, long a dedicated homebrew geek, has jumped the hoops (alcohol and taxes) and dug the trenches (water and septic) to propel his backyard operation to the next level. He hopes that the new brews he markets under the Independent Fermentation label (IndieFerm, for short) become regular features at the fine establishments catering to folks who want to drink local.

Small is a great way to go. Brewing just 100 barrels of beer a year allows IndieFerm to be nimble, adapting to local tastes as well as launching the occasional wild-yeast and cask-conditioned projects.

A tasting proves that Paul is a respecter of tradition in the very best sense. Since the brewery (ok, barn) is not climate-controlled, he must vary his brewing with the weather, reminding us how those European seasonal styles developed in the first place. By the time you read this, his smoothly malty, dark amber Doppel Alt will be available, followed by a crisp, hop-forward Rye Pale Ale. Summer will usher in a refreshing Saison, fermented with, get this, a yeast culture Nixon grew from blueberries he picked near Plymouth’s College Pond last August. Now that’s terroir!

Available at Cedarville Wine and Spirits and Long Ridge at the Pine Hills in Plymouth, Blanchard’s in Marshfield, Craft Beer Cellar in Weymouth, and Bin Ends in Braintree.

Charlotte Malakoff trained her palate at the Langue d’Or Institute in Bouche-d’Enfer, Belgium.

The past decade has been an exciting time for local food lovers, with an increasing array of foods coming to market. Yet, surprisingly, finding local chicken—that staple of the weeknight dinner table—remained next to impossible. In recent years, demand for humanely-raised chicken has increased as people have become more aware of the terrible conditions that exist on many conventional poultry farms. And as with other meats, people knew the taste of pasture-raised chicken would far outshine its grocery store counterparts, so the limited supply was quickly spoken for.

Thankfully, in January 2012 fourth generation farmers Elizabeth and Vince Frary helped fill this void in the market, starting Copicut Farms in North Dartmouth. At Copicut, chickens are raised on pasture and eat pesticide-free grass, legumes, and insects, just as nature intended. Copicut Farms also sells eggs, Cornish game hens, and, in the fall, turkeys. In a process that is state licensed and inspected, the poultry is even slaughtered on-site.

Copicut Farms products can be purchased at the farm in North Dartmouth or at ten farmers’ markets, including Hingham and Plymouth in the South Shore/South Coast area. Copicut also offers a farm share, where customers can pay a discounted price for chicken and eggs at the start of the season. Then, according to their needs and schedules, customers can pick up various cuts of chicken, as well as eggs, throughout the market season at any of the farmers’ markets that Copicut attends or on Saturdays at the North Dartmouth farm. Bulk orders are also available.

Julia Powers happily cooks whole foods in her Hingham kitchen. From roast chicken to homemade stock, the delicious, nutritious Copicut Farm chickens and eggs are a go-to staple in her house.

For years, people have been enjoying award-winning Island Creek Oysters at Boston restaurants Island Creek Oyster Bar and Row 34 (both owned by ICO), Thomas Keller’s French Laundry in California, and even at the White House. So it was high time, ICO founder and owner Skip Bennett decided, to return to ICO’s roots and open a storefront in the community where his dream was first realized in 1992: Duxbury. “For a long time, Island Creeks were shipped all over the country, and we had no reliable way of getting our local fans and neighbors, who have been so supportive of us over the years, access to our oysters,” says Skip. ICO’s retail store opened in December of 2013, much to the delight of the locals. “We were completely overwhelmed by the community’s immense response to the opening over the holidays,” Skip recalls. “We can’t wait for summer!”

In addition to their famous oysters, the ICO retail location will offer razor and littleneck clams and seasonal items such as wild sea beans (a sea vegetable that looks like a cross between asparagus and a cactus) and Nantucket Bay scallops. Oysters are $1.25 per oyster up to a dozen, $60 for a 50-count bag, and $100 for a 100-count bag and can be purchased online for pickup at the store—or you can drop in to see what’s available that day.

For those who have never tried oysters, an Island Creek oyster is the perfect introduction to the bivalve. They are classically briny but with “a sweet, buttery finish,” as Skip describes them. If you’re deterred by the thought of oyster shucking, never fear: Skip and the friendly and extremely knowledgeable staff at ICO are more than happy to give you pointers. Skip notes: “Oyster shucking is one of those sneaky life skills that you’ll be glad you have when the moment calls for it!”

Kate Strassel is the Membership Services Director at the Old Colony YMCA in East Bridgewater and a freelance food writer. Although she has never shucked an oyster herself, she has eaten many and prefers them on the half shell.