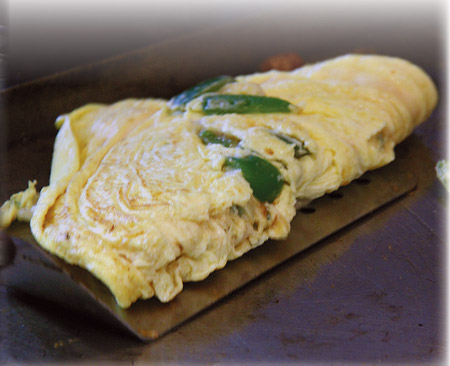 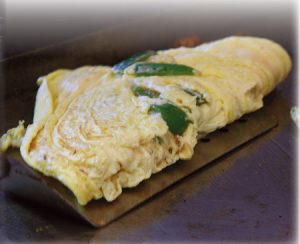 It seems so silly. Doesn’t everyone know how to make an omelet? Apparently so, but NOT ME!

I’ve mastered croissant making, Beef Wellington, elaborate desserts, and soups, but omelets have eluded my culinary expertise. If the filling isn’t falling out, it’s sticking to the pan and ends up looking like a creative attempt at scrambled eggs. Time for some omelet Rx.

I sought out two of the South Shore’s premiere omelet makers to find out what I was doing wrong. With eight locations south of Boston and over 35 years of omelet making, Persy’s Place in Kingston was the perfect first stop. So, it was off to see Jason Brooks, head chef, and omelet expert, who shared some great tips (listed below) on the art of omelet making. 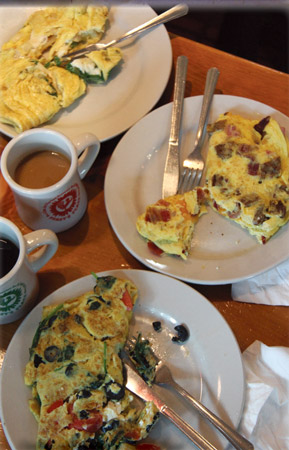 To learn from my second omelet expert I headed to Weymouth to a 90-year-old Italian restaurant, the Venetian, located in the heart of East Weymouth’s Jackson Square. Everyone knows the Venetian for their great Italian food, but on Saturday and Sunday mornings, the Pica family opens for breakfast! And, who would have guessed that along with frittatas, Belgian waffles, and eggs Benedict, this Italian restaurant also serves an authentic Irish breakfast that people drive miles to eat!

I sat down with John Pica III to discover his tips for making a great omelet. Like Jason, John says the goal is not to have any browning, so be patient, be patient, be patient! He also rejects the addition of water or milk and advises keeping the cooking egg mixture in continual motion: “Never let it sit still.” When the eggs start to “fluff up” and move easily from the sides of the pan you can fold the omelet over. (Pro tip: John recommends folding your omelet over homemade corned beef hash!)

Tip 1: Use a well-seasoned steel pan; 6–8 inches for a single serving, 8–10 inches for an omelet for two. Some novice cooks may be drawn to a non-stick surface, but health and environmental ramifications should factor into your choice. A metal utensil conducts heat so select a silicone or wooden spatula instead.

Tip 2: Beat the eggs (two whole eggs per person) with salt and pepper but don’t over-scramble. Jason recommends that you should have some yolk pieces still intact.

Tip 3: Don’t add water (my first mistake). You can add a touch of cream, but not too much. 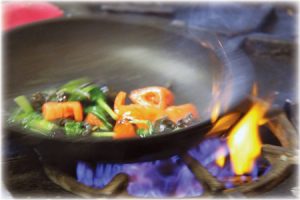 Tip 4: If you are adding vegetables, cook them ahead of time in the pan with a little butter or olive oil to sweat out the moisture. This method helps to create a lighter, more flavorful, less soggy omelet (my second mistake). Meats (bacon, sausage, etc.) should be cooked ahead of time as well; be sure to drain the excess fat.

Tip 5: Heat the pan on a medium-high flame—not so hot as to scorch the delicate butter and eggs, but enough to move along the cooking quickly. A pan that is pre-heated before the eggs are added is key to the omelet’s eventual clean removal.

Tip 6: Add a little butter or olive oil to the pan and reduce the heat a bit. Add the eggs and use the spatula to move the eggs, pushing them from the outside in, as they cook. Add the veggies and meats. Keep moving the omelet until it begins to naturally pull away from the side of the pan.

Tip 7: As the eggs set up, add a thin layer of cheese. Once its middle is somewhat firm and the cheese is melting, fold the omelet over and slide it onto a plate. Jason says that a great omelet does NOT have any browning. “Don’t rush the cooking process. Take your time. It will be worth it.” (Pro tip: Jason recommends Persy’s California omelet with feta, avocado, and red onions as a classic combination.)

N.E. Sheehan holds degrees in Journalism, Food Science & Nutrition and has had a 30-year career in radio sales, broadcasting, and newspaper reporting. She has now mastered an omelet that remains in one piece—and looks like an omelet should.