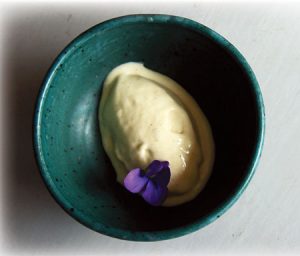 Scrub and peel the sunchokes. Place in a saucepan with the cream and salt; bring to a simmer and cook until very tender. Leaving the cream in the saucepan, use a slotted spoon to remove the sunchokes to a food processor or blender and puree until smooth. (If more liquid is needed for easy pureeing, add a bit of the hot cream.) Set aside.

Add the lemon zest, spices and milk to the cream in the saucepan and slowly warm it over low heat until it steams. Have ready a large, fine-meshed strainer set over a large heatproof bowl.

Meanwhile, whisk the egg yolks in a medium heatproof bowl. Add the sugar to the egg yolks and whisk until the mixture becomes pale and thick. Add ½ to 1 cup of the hot, steamy cream mixture to the yolk mixture while continuing to whisk. Whisk this tempered yolk mixture back into the cream mixture in the saucepan, which still should be on low heat.

Scrape the bowl and the sides of the saucepan with a silicon spatula, then continually stir the bottom of the pot with the spatula until the custard thickens considerably. Watch carefully and do not allow it to approach a simmer. (Look for 180 degrees on an instant read thermometer.) Strain the custard into the bowl, fold in the sunchoke puree, cover airtight and chill in fridge overnight before transferring to an ice-cream maker’s freezer bowl and churn-freeze according to the manufacturer’s instructions.