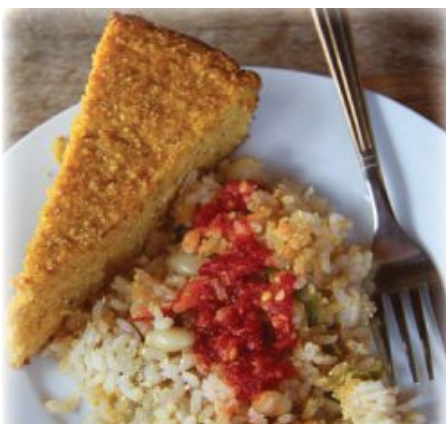 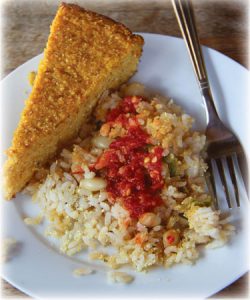 This Cape Verdean staple dish–generally called “jag” these days–has been on tables in our region since the mid-nineteenth century. Like some of the best local cooking, jag’s transmission has mostly been an oral history affair, mother to daughter. That said, a few early twentieth-century yankee cookbooks do contain recipes for “jagasee” and, interestingly, do not refer to it as anything terribly exotic. In the absence of hard documentation, it’s fun to contemplate how a West African staple became a part of the supposedly closed diet of Anglo New Englanders—possibly a testament to the power of good food and shared hard work on land or sea.

As a child, Belmira Nunes Lopes, who was born here in 1899 to Cape Verdean immigrants, followed the cranberry harvest annually with her whole family, working from bog to bog, picking, screening, and boxing. In her memoir, she fondly remembered jagacida as her favorite of the two commonest meals on the family dinner table in East Wareham. In summer, their jag would contain shell beans, green beans, or green peas fresh from the garden; in winter, dry small limas. Sometimes Belmira’s mother would receive a parcel of special dry beans from her people in back in Brava. These fijā pedra (look for them in Portuguese grocery stores, marketed as “rock beans”) are part of a tropical bean family most often called “hyacinth bean,” “dolichos” or “lablab”. They have a distinctive flavor and texture and are well worth experiencing if you can find them.

In acknowledgment of the hardship of the bog-working life, this version of jag, gleaned from Belmira’s memoir, is pretty spare. In contrast, today’s meat-rich cooks often fry some linguiça in with the onions. Belmira’s mother finished her jagacida by steaming a sprinkled layer of cornmeal on top, an austere but inspired touch.

Soak the beans overnight in plenty of water. If using rock beans, change the water twice, discarding the soaking liquid. Simmer beans until tender but not mushy and drain.

In a dutch oven, fry the salt pork over medium-low heat until the fat is rendered and the scraps look translucent and a little crisp, or just warm up the olive oil. Raise the heat to medium and add the onions, whole or chopped. Chop and add any of optional vegetables, and fry until tender and aromatic. Add the remaining seasonings, then the water and reserved beans. When the pot boils, stir in the rice, turn the heat to low, and cover.

Cook at a low simmer about 20 minutes, until the rice is tender. For the authentic finish, sprinkle cornmeal evenly atop the jag for the last five minutes of cooking. Either way, turn off the heat and let stand at least 10 minutes before serving.

Read the Story that inspired the recipe.