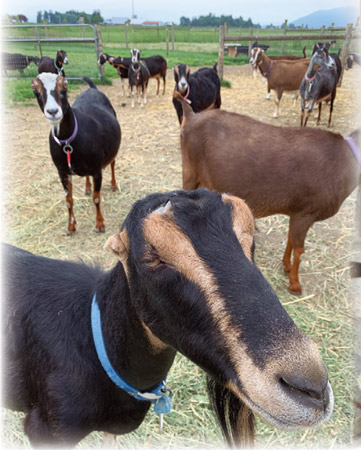 The idea that every single variable of an agricultural area plays a part in the outcome of what’s grown there is older than, well, dirt. The French first called this concept terroir centuries ago, although many cultures across the globe believe in its impact.

Terroir is what differentiates Pinot Noir grown in Oregon’s Willamette Valley from that made in Burgundy, France. It explains why cheddar made in Vermont can be quite different from cheddar made in England. Or why an oyster in Wellfleet tastes different than its Duxbury counterpart. Terroir plays a critical part in a food’s character, and some places are clearly better than others.

Along the coastline of northwestern Washington State, the Chuckanut Mountains slope down to greet the Pacific Ocean at Samish Bay, the only portion of the entire Cascade Range to touch water. Farmland fills the landscape as far as the eye can see. Animals lazily graze here and there. Tractors pull tillers and plows. Here in Skagit County, agriculture is everywhere. And it is thriving.

How did I learn about such a unique and productive pocket of agriculture? Last year I was contacted by cheesemaker Rhonda Gothberg, owner of Gothberg Farms, in support of my book, Tasting Wine & Cheese – An Insider’s Guide to Mastering the Principles of Pairing. We spoke for over an hour. Rhonda is gregarious, intelligent, and a fierce advocate for the local food system and the culinary advances being made in her area. During our conversation, she told me about her community. She casually mentioned a miller who stone-grinds flour from regional grains, and the meat co-op with over a hundred farms participating. She informed me about the local malting facility and craft microbrewers. The list just kept going on—all in her proverbial backyard. 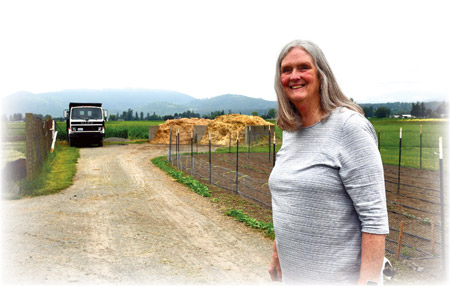 I couldn’t wrap my mind around what I was hearing. How could a small community have such an impressive resume of agricultural activity? “That’s just the start of it,” Rhonda said to me, laughing a little bit at the dubious tone of my voice. “There’s a lot more. We have an incredible food ecosystem here. It’s something special. You should visit!” she exclaimed.

Invitation accepted. After a few more phone calls to iron out the details and a two-hour drive north of Seattle to the small town of Bow, I turned into Rhonda’s driveway. She greeted me warmly and we talked about what the day had in store. After checking out her farm we’d drive around the community so I could get a better sense of just how amazing this region’s terroir is. I eagerly agreed to the plan.

After exploring the dairy and playing with Rhonda’s twenty or so milking Lamancha goats, we drove to visit Kevin Morse, cofounder and CEO of Cairnspring Mills. A compact man with an incredible knowledge of grains, Kevin is fiercely proud of what they are creating there. “We want to have clean, local food,” he asserts. “We want to provide jobs for people and help rebuild our local food system.”

Kevin bristles at the thought of being compared to the large commercial producers in the northwest and other regions of the country. “We’re not like the big midwest farms and don’t want to be.” He is particularly proud of the work they’re doing to preserve regional grains, and the success they’ve had doing so. “Commercial milling kills the germ,” Kevin laments. “There goes the nutritional value. That’s half the problem. We don’t do that stuff.”

Their top client is California bakery extraordinaire, Tartine. Cairnspring Mills regularly sends pallets of milled flour to their locations. “They love our flour,” Kevin says. “It’s of the quality they’re looking for. Our soil makes that possible.”

What makes all this agricultural activity happen is Skagit Valley’s nearly perfect growing conditions. The region boasts some of the best farming soil in the world, rating in the top 1% for crop productivity. Bow and its neighboring areas enjoy soil composed of gravelly loam and silty clay. With an average of 30 inches of rain and up to 220 days frost-free each year, the terroir is incredibly well-suited to cultivated crops, and the locals take full advantage of it.

The farms here produce an incredible range of fruits, vegetables, flowers, and seeds. They grow more than 80 crops of significance (a huge amount for a single farming zone), including strawberries, tulips, green peas, sod, and daffodils. The area is also one of the most prolific seed producers on the planet, providing millions of seeds each year to home gardeners across the country. 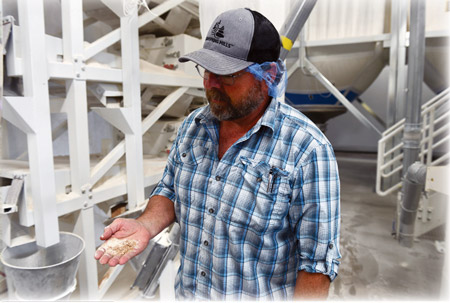 Kevin Morse, CEO of Cairnspring Mills, works with heirloom grains to create his flours; That everyone around them is crackers!

Leaving Cairnspring Mills we visit The Bread Lab, a collaborative plant-breeding and baking research effort between Washington State University and King Arthur Flour Company. Their mission is to develop and breed grains that benefit both farmers and consumers. The local terroir allows them to work with thousands of lines of wheat, barley, and buckwheat. “They do some amazing work here,” Rhonda tells me. “It’s all possible because of the conditions.”

Even the seafood industry in Skagit County benefits from the amazing terroir. Rhonda takes me down a long, winding road through gigantic conifer trees and over railroad tracks. After a few minutes we come to a clearing at the water’s edge, where Taylor Shellfish Farms still pull shellfish directly from the sea. Pacific Ocean mussels, oysters, black cod, and more line the huge display tubs. The fish are robust and healthy. The mollusks are huge, impossibly sweet, and delicious. I ask an employee what their secret is. “The waters here are perfect for this. All we have to do is reach in and fish it out,” she says.

All over Skagit County people are taking advantage of the amazing terroir in their backyard, leveraging the unique climate and soil conditions to harvest some of the world’s best produce and meat. With the success and quality they’re consistently enjoying, Skagit County might not be a secret for much longer.

Adam Centamore is a food and wine educator, author, and travel writer in the Boston area. When he’s not eating cheese or drinking wine for “work,” he’s on the move looking for the next amazing culinary adventure.