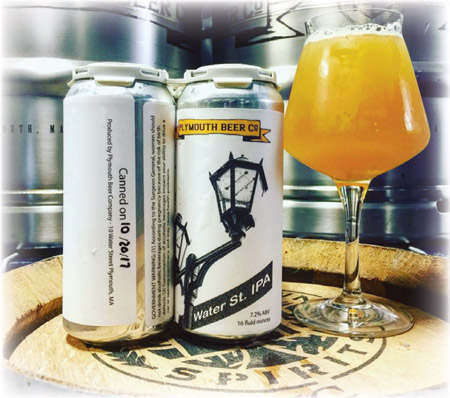 Visitors flock to Plymouth every year in search of historically accurate depictions of the first settlers, a mock-up of a famous ship, and a large rock. If a group of brewing food-enthusiasts is right (they are), beer and food tourism are the next big crest for America’s Hometown. As the holidays swirl around us, and you’ve had your fill of Aunt Mary’s fruitcake surprise, head on down to Plymouth for some drinking and eating. You’ll be pleasantly surprised to find America’s Hometown setting itself up as a beer and food destination.

Tom Frizelle has spent the last two years quietly making his mark on the Plymouth beer scene. The head brewer at the newly opened Plymouth Beer Company (PBC), moved down from Manchester, New Hampshire to help open the Plymouth branch of Craft Beer Cellar, and found a burgeoning beer scene supported by an outstanding culinary arts setting. Once the beer store had legs, he returned to his passion, brewing, and became the head brewer for the brewery owned by–and sharing production space with–Dirty Water Distilling.

Tom describes his beers as “English influenced, even though my second beer was a Belgian,” and says he brews old world styles with a new world spin on them. His Cranberry Wit (on tap at local favorite Speedwell Tavern) is both tart and refreshing, and PBC just canned Ursae Minoris, an American IPA that is available at the brewery. The plan, Tom says, is four core brews, including the Wit and the brewery’s Water Street IPA, provided to local eateries and pubs, while trying to offer beers for all palates.

Tom is quiet and humble about the success of the brewery and the beers he brews. PBC delivered their first beer to Speedwell in July and have already become a fixture on the draft list there, as well as at the British Beer Company around the corner. The brewery’s Facebook page is popping with love from friends and newcomers alike.

In the future, Tom hopes to expand the brewery’s production and offer pints for sale on-premise, as well as a deeper collaboration with Dirty Water Distillery and a stronger focus on local ingredients.

Because of the distillery’s space, and familiarity with the local inspectors and how they like to see the liquor projects handled, Tom says he found the opening process “pretty easy”. As a testament to the small-town Plymouth is, local political representatives assisted with the final state license process.

Second Wind Brewing’s experience hasn’t been as simple, Kenny Semcken, one of the brewery’s co-founders, says. “We had an empty building, with no utilities,” Kenny recalls. “We had the space re-zoned and organized all the permits and contractors to connect it to water, sewer, gas, and electric ourselves. We’ve been working around our full-time jobs on this build-out, installing plumbing, hanging drywall, painting, tiling—you name it.”

The town, once again, stood behind Kenny, Hans Terbush, and JR Shepard, the three co-founders of the other downtown brewery, with neighbors offering labor in their areas of expertise. But the help didn’t come from only friends and family. “There was an incredible outpouring of support,” Kenny says. “Between the building department, the fire department, and the board of selectmen being so great to work with, to running into people on the street who recognize what we’re trying to accomplish and ask ‘How’s it going? We can’t wait!’” 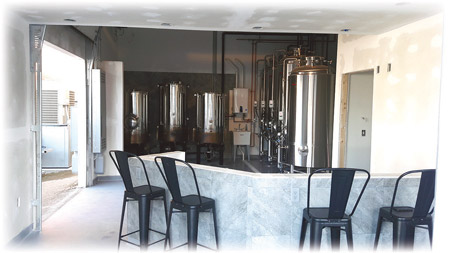 Second Wind hopes to open their doors in November. They have their federal and state licenses in hand, and are just waiting on the build-out process and then, of course, the beer. Their recipes now focus on hitting some main tasting points: “hoppy and juicy,” “big and rich,” and “easy drinking.” Like Tom, they are trying to brew for beer geeks and beer novices alike. The brewery’s name “is a reflection of the energy we have to handle both this business and our full-time jobs,” Hans says.

As for why Second Wind settled in Plymouth, the trio has a passion for their local community and its potential as a craft beer destination. “We all live here—this is home,” Kenny said of Second Wind’s owners. “We’ve always envisioned Plymouth having the beer and food tourism like Portsmouth or Portland. Our mission is to make Plymouth that ‘third P.’”

Hans added an established local network to the list. “We have great relationships with the owners of the local restaurants, breweries, and craft beer stores,” he said. “We’re really excited to collaborate with them.”

How close are the two breweries? Aside from agreeing to being interviewed simultaneously, and being less than a mile from each other, the two groups have consecutive brewer’s license numbers. They also share business aspirations.

It would take a pretty special environment for two breweries to open in a city of Plymouth’s size, where two other breweries (Mayflower and Indie Fermentations) have already established a strong foothold. Hans says the scene had been building for a long time.

“The food scene here is incredible,” he says. “When Drew Brosseau opened Mayflower in 2008, things started taking off.” Tom also attributes some the success of the beer scene to the foodies. “The restaurant owners here are beer aficionados,” he notes. “They bring in the best stuff so they can drink the best stuff!”

“New World Tavern’s opening in 2011 helped, too,” Hans adds, referencing one of the first beer-centric bars on Main Street, which has offered 32 draft beers and over 100 bottles since they opened.

Kenny connects the town’s “vibrant off-season community” to the rise. “A restaurant can be slammed on a Wednesday night,” he says, noting that the residents like to have their “local pub”. JR Shepard says the development of the scene was something you could see progress. “You saw it grow from the other side of the bar, as patrons,” JR says. “Every year the beer gets better, and the food gets better around it.” Hans likens it to the bay: “a rising tide lifts all boats.”

Tatum Stewart found her way into Plymouth alongside Tom, as a partner for the Craft Beer Cellar on Main Street, as well as one of the founding partners of Bay State Brew Tours. Bay State Brew Tours provides users with a bus, a beer-geek driver, and transportation between the area’s growing number of breweries. The company’s Plymouth Area tour hits big guns Mayflower and Indie Ferm, as well as PBC/Dirty Water Distilling, and, soon, Second Wind. Bay State Brew Tours also offers a South Shore Tour, taking in some of the south shore’s more northern beer spots.

Tatum points to events like the annual America’s Hometown Throwdown Chef Competition in October to show how closely the restaurants work together. “There’s a real collaborative nature to the business in town,” Tatum says. “The restaurants compete, but they’re all friends.” She likens that to the beer scene, noting that two competing breweries are sharing a table in a quiet corner of the restaurant.

What does the future hold for what is starting to look like an established culinary arts and beer destination? “More breweries,” Tom declares, before explaining the dichotomy of the Water Street and Main Street areas of the town. “They’re two different scenes right now,” he says. “I think we’ll see a merger of the two in the future.” Tatum agrees, “It’ll be nice to get some people up off of Water Street to see what else Plymouth has to offer.”

Matthew Foster is a South Shore based beer nerd. When he’s not writing about beer, or drinking beer, or brewing beer, or working (sigh… not with beer), he’s spending time with his wife, Lauren, and their two children.