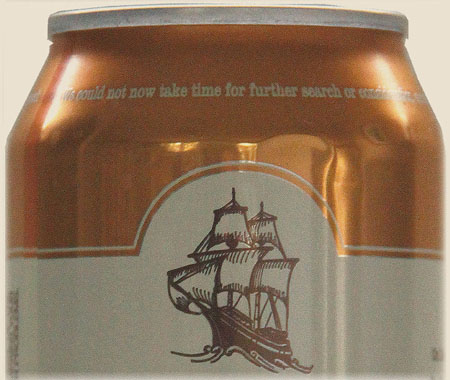 If you are a beer-lover in Southeastern Massachusetts, any introduction to Mayflower Brewing will probably be superfluous. After all, this Plymouth institution sets the standard in our neighborhood for consistently delicious, well-conceived, high-quality quaffs. You already know that they’ve been around for just ages, and you can get their beers in any restaurant or bar worth setting foot in, and they’re always up to something new with their product line, so they must be just huge and everywhere, right? 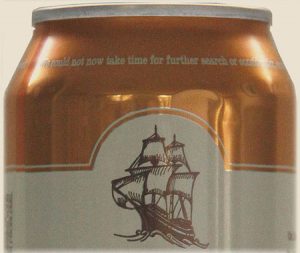 Well, you’d be forgiven for thinking those things because their operation IS so good and so visible, but in reality Mayflower is not yet ten years old, and its quickest-growing market is still in Plymouth. They’re neither as big nor as ubiquitous as we tend to think.

So, Mr. or Ms. Local-Beer-Lover, if upon searching your soul you find that you might be taking our region’s premier craft brewery just a teensy bit for granted, let us glance back at the pre-Mayflower landscape, that we might raise our hearts with thankfulness for our deliverance from that barren wilderness. Mayflower prepared the path for an amazing number of recent brewing startups in Plymouth and Bristol counties (see directory in eSS&SC, Autumn 2016 issue), obscuring the memory that only ten years ago this swath of territory was pretty much pure Bud Light land. 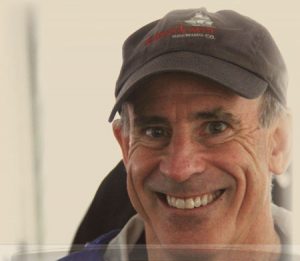 The year is 2008. Our hero, a mild-mannered but canny Boston investment guy by day, harbors a secret vice and a wild dream. Beneath his diffident, cautious demeanor, Drew Brosseau is hatching a plot to leverage his assets so as to launch himself free of his button-down constraints into the exciting world of commercial brewing.

Tenderly nursing his cryptic project and painstakingly planning his every move, he drafts his brand and its initial product line. From the earliest phases of development, no detail is too small for him to anticipate; no threat to his business plan too veiled to meet head-on.

And what does our hero do when it comes time to lease space for his brewery/HQ/lair? In a surprising twist, considering his cautious businessman demeanor, the protagonist of this drama persuades himself that locating his brewery in Plymouth would be a wise plan. Sure, from the perspective of today’s barstool, it may seem like a natural choice—cheaper rent than in the city, expandable high-ceilinged space near the highway, zero local competition—but success is not guaranteed just because no one else is doing something. Um, because if success were guaranteed, someone else would have already been doing it.

Plus, ten years ago the Boston beer scene was bursting with craft-beer-guzzling proto-hipsters who would have welcomed a new addition to their burgeoning choices. The South Shore, by contrast, was not, shall we say, a proven market for quality beer.

So, how did Drew make this critical decision? Apparently, it came to him in a flash on that first fateful location-scouting foray into Plymouth. As he drove, mind abuzz with his plans, Drew was moved to remember his 13th great-grandfather, John Alden, the cooper aboard the Mayflower in 1620.*

And Shazam! The brewery would be called Mayflower!

*Yes, Drew really IS a direct descendant of John Alden! And the cooper would be the guy in charge of keeping the barrels of beer and other supplies sound during the voyage. Eerie, right?

Here’s how that electrifying moment unfolds on the graphic novel storyboard in my imagination:

Scene: Drew Brosseau, driving down Route 3, deep in thought. The sky is ominous.

“Quietly mulling over his unnamed brewery concept, our hero suddenly feels a tingling throughout all his senses. Then he hears a voice from the back seat.”

A shocked Drew glances in the rear-view mirror to see an elderly, yet authoritative-looking, guy in archaic garb. Leaning forward in his seat belt, the dude beseeches him:

“Drew, my lad, I beg you to think with mercie upon the poor parched souls of the Olde Plymouth Colony, my adoptive home. Yea, verily, Boston hath its Harpoon, its Shipyard, and, indeed it goeth without saying, its foundational and most well established grandsire, Master Samuel Adams, his lager.

Rather than bee a mere upstart amongst the many brewers in the citie, make thyself an hero in the wilderness, the driest of deserts, the piteous South Shore. Look thou well upon the model of the Masters Russell of Buzzards Bay (upon the South Coast), and brew wondrous beer for the entertainment and nourishment of thy good neighbors, yet fall not, as they have, into the wicked trappe and gaping maw of the demonic distributors!”

“As he struggles to remain in control of his vehicle on the Exit 7 off-ramp, Drew feels the heady pulse of ancient Saxon barleymalt rising in his bloodstream, the atavistic tug of East Kent Golding hops twined throughout the trellis of his DNA. ‘Zounds!’, he cries out, “It shall be Mayflower!’” 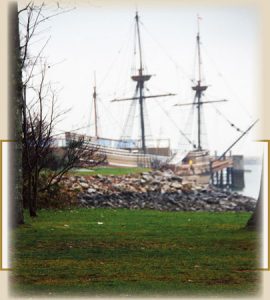 Well, whether this scenario actually occurred, or it was just the bite from the radioactive spider that made Drew take the leap, the net effect—Mayflower Brewing—turned out to be our great good luck here in the land of edible South Shore & South Coast. Now that, eight years in, we are celebrating a region teeming with micro-and nano-breweries, it’s easy to forget that the first one to jump in took a pretty big risk.

Hopping to the present:

Returning to what passes for reality in 2016, I probe Drew to find out if he, too, is tempted to take Mayflower for granted now, but like most game-changers he’s not one to rest on his laurels. True to form, his approach to change is not violent or drastic, but thoughtful and balanced. While giving every appearance of stability, the Mayflower lineup has grown and evolved. Market forces have shaped these changes, but Drew has exercised his typical restraint in resisting the urge to jump on the beer wagon with everyone else at every turn.

This past summer, Mayflower shifted to packaging in cans all their products but the limited edition Cooper’s Series, a move that is in line with industry trends and has proven quite popular with consumers. 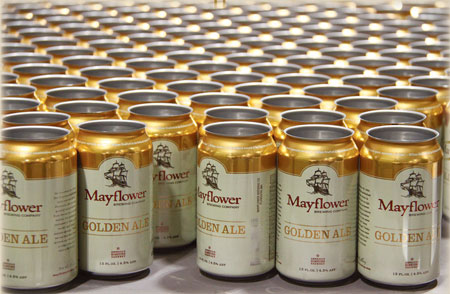 And, like every other brewer in the world, Drew has been unable to ignore the recent market fascination with IPAs, but he is not about to go overboard with extreme bitterness or to sacrifice clarity in pandering to the frenzy of the moment. Indeed, since Day One, Mayflower has offered a classic IPA that hews perfectly to the traditional style—crisp, balanced, and delicious. But now they also sport occasional variants of the style among their Cooper’s Series, as well as other one-offs, like the Session IPA available in the brewery taproom on the day I visited.

And then there’s the Evolupulin Double IPA, which is an interesting project that has yet to decisively capture beer-drinkers’ imaginations and enthusiasm. Basically, it’s a long-term, slowly unfolding opportunity for us, the drinking public, to really learn about the flavor and aroma of hop varieties. Here’s the deal: Mayflower is brewing the identical backdrop for each version—based on 100% German pilsner malt—but then embroidering distinctive hop aromas and flavors on that canvas, while also retaining a steady bitterness profile. The curious drinker can check the date on the can and refer to the website:(http://www.mayflowerbrewing.com/beer/evolupulin/)
to discover the specific hop combination of each batch. Definitely appealing to the super-geeky hop-heads among us!

The brewing team remains enthusiastic about experimentation. Visitors to the Mayflower Taproom (onsite at the brewery) experience that spirit vividly, as aged and sour and funky-wild and other one-off brews that never see packaging of any kind are regularly on offer. (The taproom is now, sadly, the only place to experience Mayflower Pale Ale, which was put out to pasture as a casualty of the current universal hop fetish. Pressed by this reporter, John Alden confessed he is a bit peeved about Mayflower dropping Pale Ale as it was his favorite beer in the lineup, a familiar flavor from his early-17th-century youth near London. But, like me, he appreciates that they still brew it at all. And it’s a good excuse for us to visit the taproom.) 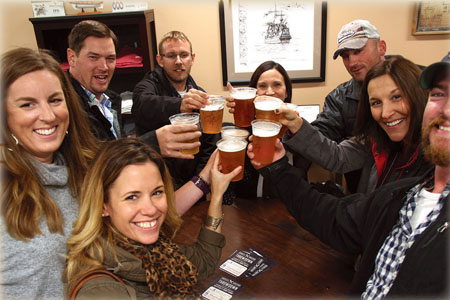 Over the years the taproom has gradually increased hours and offerings, and has become a sweet place to stop in for a pint after a long day, or to show off to beer-loving out-of-town visitors. At this very moment, the venue is getting a makeover and expansion which will allow the brewery to host more public and private events. Drew spoke with pleasure about using the space to support and engage with local organizations (Mayflower has hosted wonderful events for eSS&SC, for example). Recently, the brewery put on the first-ever America’s Hometown Throwdown Chef Competition to benefit Plimoth Plantation’s ongoing restoration of Mayflower II. Lots of fun and trash-talking among some of the top chefs in the Plymouth area, swell local food and drink for the attendees, and some timely support for a poor old wooden sailing vessel and irreplaceable historic emblem. Rob Kluin, Plimoth Plantation’s Director of Marketing & Communications, expressed the museum’s gratitude, saying, “Mayflower Brewing takes pride in our community, its people, history, and culture. This business has a vision for the overall well-being and sustainability of Plymouth, and makes an effort to foster partnerships that achieve positive results.” 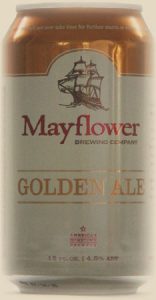 Even more tellingly, the region’s newest brewers speak highly of the inspiration and positivity that has flowed their way from their most established competitor. Drew laughs when I suggest that his brewery might seem to these new entries on the scene like Sam Adams did to him a decade ago. But he seems to see the local craft-beer culture as more of a rising-tide-lifts-all-boats community than the zero-sum doomsday game played out by Anheuser-Busch, Coors, and Miller. As Paul Nixon of Independent Fermentations Brewery in Plymouth says, “The beer scene has changed so much, it is easy to forget that Mayflower was a beer pioneer just a few years ago, creating an audience for flavorful beers. If Drew hadn’t been willing to take a big leap of faith and start his brewery, ours (Independent Fermentations), and so many others, wouldn’t be in business today. And instead of protecting their piece of the pie from new competition, Drew and all the folks at Mayflower have been very supportive to us at IndieFerm. The craft brewing community is unique in that way and Drew helps set that tone.”

Cheers to that! See you in the taproom!

Paula Marcoux is a food historian who lives, cooks, and writes in Plymouth. She would like to point out that Mayflower Brewing’s new packaging makes it easier to jam a six-pack into a Santa stocking than ever before.