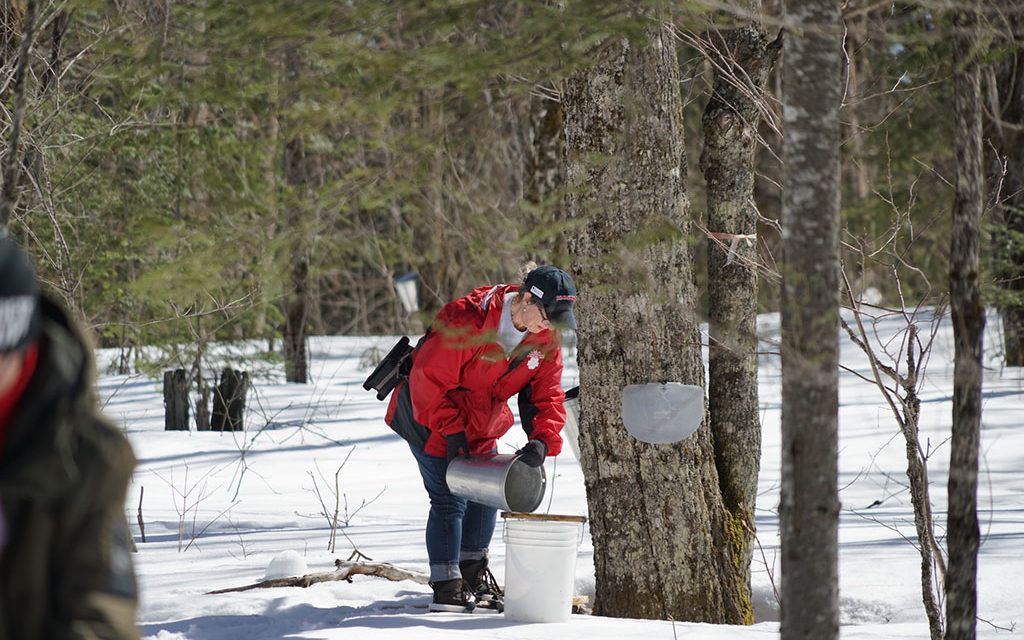 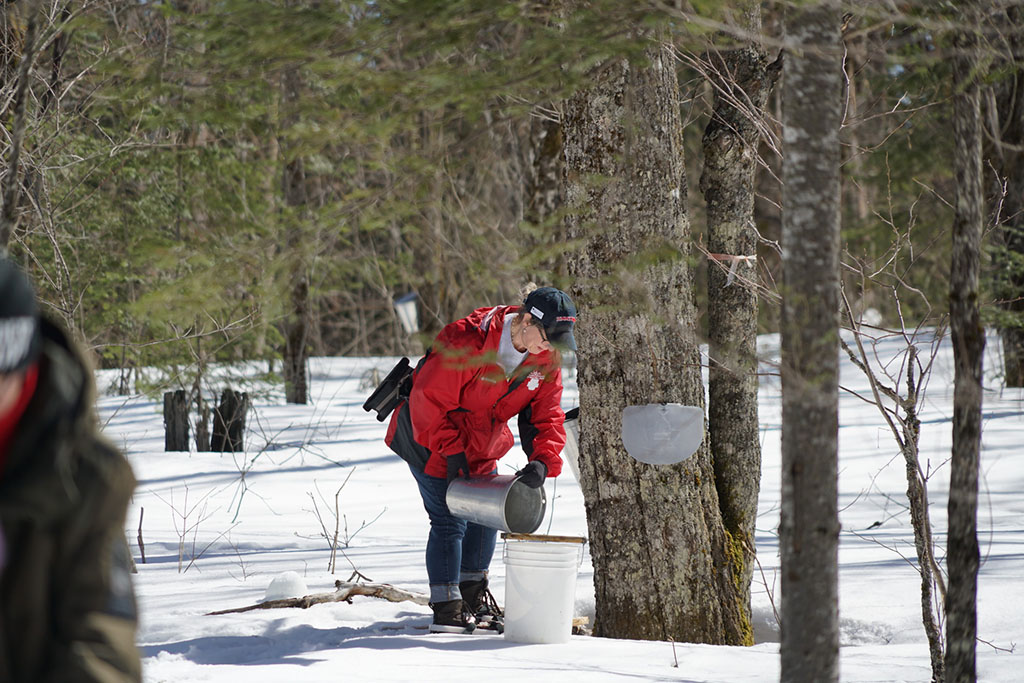 While many people think of maple as a fall flavor,
maple sap is a late winter or early spring harvest!

Maple isn’t a typical backyard harvest here in Southeastern Massachusetts, but that doesn’t mean it’s not possible. If you’ve got maple trees, there’s a good chance you could make some syrup at home. You only need a few trees to collect enough sap (aka tree water) to boil down to syrup. If your maple tree is at least 10” in diameter, you can tap it to collect sap. Tapping trees when they are younger and smaller can damage them. You can add one additional tap for every additional 5” in diameter. Tapping trees takes only a few minutes, and taps are available to purchase in a variety of locations (try a local hardware or farm supply store). The best maple varieties for tapping are Sugar Maple, Black Maple, and Red Maple, because of their high sugar content.

Knowing when to tap the tree is key to collecting enough sap to make syrup. While most people think of maple as a fall flavor, maple sap is actually a late winter or early spring harvest. Sap collection begins when overnight temperatures are below freezing (32°F) and above 40°F during the day. Around here that can be as early as mid-February, with the most sap collected when temperatures are in the 20s overnight. Typically, the season for sap collection is 4 to 6 weeks. Making syrup is quite easy once you’ve collected enough sap (at least 10 gallons of sap to make 1 quart of syrup).

Making syrup is a simple but lengthy process of boiling and evaporation. Typically, this is done outside since a large amount of the water will be cooked off during the boiling process. This is great to do over a wood fire, but it can be done on a propane burner as well. Because of the amount of sap you’re boiling and the amount of steam produced, it’s not something you want to do inside. You’ll start by pouring the collected sap into a large pot. If you have space, a large shallow pan (versus a pot) will increase the evaporation rate and allow you to boil down your sap more quickly. Use a candy thermometer to monitor the sap’s temperature.

As the water boils off and your sap begins to reduce, add more water to the pot in small amounts. If you do this step too quickly, you’ll kill the boil. Boiling concentrates the sugar in the sap. The temperature rises as it continues to boil, and the water evaporates. When the sap darkens and the bubbles get smaller, you’re almost done. Keep an eye on the temperature–when it reaches 219 degrees you have made maple syrup! Strain the hot syrup through cheesecloth or butter muslin into smaller containers for storage. Unless you are going to can (heat process) your syrup, you should store it under refrigeration, as it is prone to molding.

What about maple syrup grades? What do they mean? In 2015 the USDA changed the grading system for maple syrup. Prior to 2015, syrup was graded A–D, with D being a processing or commercial grade.*

All syrup you buy now is Grade A, unless you are purchasing “Processing Grade” syrup for commercial use. The Grade A designation now includes color and taste descriptors, ranging from golden and delicate to very dark and strong. Use these to help you find a syrup you like. If you’re making your own, you’ll probably end up somewhere in the middle of the scale, unless you collect a lot of sap. Earlier sap runnings result in lighter, more delicate tasting syrup while later runnings usually result in darker, more robust flavors. Within the season, you can leave the tap in the tree until sap stops flowing.

Maple syrup is a more than just a pancake or waffle topping. It has many uses in the kitchen. As a sugar substitute, you can use it to sweeten coffee, tea, and baked goods. Make the iconic maple sugar candy, the quintessential Quebec dish eggs in maple syrup, or maple taffy. It can be used to marinate meats, make salad dressings, and more. When substituting maple syrup for sugar in baking, use ¾ cup of maple syrup for every 1 cup of sugar. You’ll also want to reduce liquids in the recipe (like water or milk) by approximately 3 tablespoons.

Grade A: Golden Color and Delicate Taste (Previously known as Fancy or Vermont Fancy) This is the lightest of the new maple syrup grades and highly recommended for drizzling over waffles, pancakes, or ice cream.

Grade A: Amber Color and Rich Flavor (Previously known as Grade A Medium Amber or Grade A Dark Amber) This grade of maple syrup is a little more flavorful and works well when cooking and baking.

Grade A: Dark Color and Robust Flavor (Previously known as Grade A Dark Amber or Grade B) This grade of maple syrup is even stronger in flavor and is best used for recipes that require a heavy maple flavor.

Grade A: Very Dark and Strong Flavor (Previously known as Grade C)This grade of maple syrup is very strong, and probably best used as a substitute for molasses and for making maple candy.

Linda Davey loves to play with her food. She especially enjoys working with seasonally available foods and is a frequent shopper of many local farmers’ markets. Winter is sometimes a challenge, but there’s always a fun food find to celebrate.