Appledore Island: Isles of Shoals and the Shoals Marine Laboratory 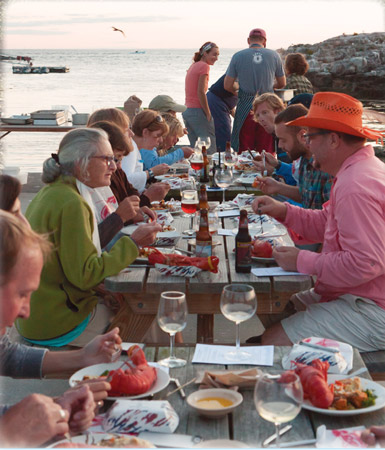 It seems I meet great cooks wherever I go; some alive and working, others quite deceased. In decades past, I encountered those departed cookbook authors mostly in the dim quiet of libraries, sandwiched between covers and shelved among like volumes, or maybe spooled on microfilm and boxed up in drawers. But these days, their apparitions may be conjured as downloads from the bibliographic ectoplasm to my laptop, where they endure my ceaseless scrolling and searching without complaint. What a joy it is for me to seize on the work of some long-forgotten cook and, with whisk and knife and saucepan and fire, breathe new life into her formula for a delicious dish. What a thrill to, guided by ancient expertise, cook and eat foods that may well have gone untasted for centuries!

Okay, as much fun as all this culinary tomb-raiding is for me, I understand that not everyone shares my glee in consuming food history and historic food. Which is why I was excited beyond belief to meet two chefs who not only fall in the “alive and working” category but who cultivate a dynamic interest in the handiwork of past cooks. Each of these men is a noted and influential chef: Sam Hayward’s Fore Street has been the backbone of the vibrant food scene in Portland, Maine for more than three decades, and Evan Mallet’s Black Trumpet in Portsmouth, New Hampshire, is wa-a-a-y more of a food-lovers’ destination than the humble bistro it makes itself out to be. Both men have been serially recognized by the James Beard Foundation for their contributions to American cooking and hospitality. But, when I met them out on Appledore Island, a sea-lashed pile of rocks six miles off the coast of the New Hampshire/Maine border, they were preoccupied with creating a multi-star menu out of an apparently barren landscape as a hurricane loomed.

Sam and Evan are known for their deep commitment to making their businesses, and by extension, their common regional food system, more sustainable in every way. Over the past few years, at the cusp of summer and autumn, they have teamed up with the Shoals Marine Lab to put on an event styled Take a Bite out of Appledore: An Eco-Culinary Island Retreat. Over the course of three days, a small group of participants embarks on an extraordinary learning experience with these chefs—snorkeling in the tidal pools for small creatures most Americans don’t see as food; fishing with rod and reel for pollock and mackerel and striper; foraging for the meagre plant materials afforded by a windswept rock six miles off shore, working shoulder to shoulder en masse in the kitchen. 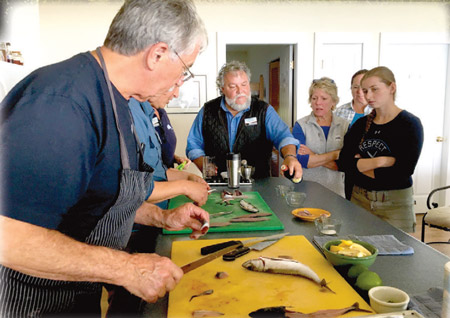 The degree of joy and imagination that Evan and Sam bring to this project is matched by that of their amazing partners at Shoals: marine biologists, plant biologists, and the Marine Lab’s director, Dr. Jennifer Seavey, a huge-spirited multi-talented 13thgeneration “shoaler” herself. Over the course of the weekend Jenn briefs us on island history and lore, and fields questions that fall within her academic specialty of bird ecology. Leading the group on a welcome walk around Appledore the first evening, Jenn “happens upon” a basket of Smuttynose brews she soon shares. It’s gratifying enough to sip the namesake beer while gazing upon tiny Smuttynose Island just across a little cove, but then, uncannily, an actual “smuttynose” (young seal) hauls its spotted self out of the surf to, honest-to-goodness, recline on the stony shore near us. A magical beginning.

Completing the roster for Take-A-Bite weekend was my old friend, John Forti, of SlowFood Seacoast and Bedrock Gardens, an heirloom gardener, herbalist, and garden historian, himself another core partner in this event. 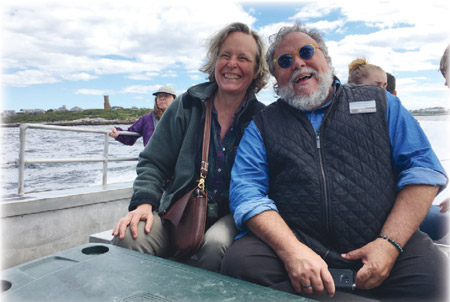 A scrappy cluster of islets with an unsettled past.

Before making my first boat trip out to the Isles of Shoals to take part in this spree of hunting/gathering/cooking, my only knowledge of the islands had been via historic documents. Thus, in outline form:

Until now, it was that mid-nineteenth-century hotel era that had most informed my understanding of the island; that establishment, the Appledore House, had been a training ground for one of my favorite culinary specters, Maria Parloa. Having worked in its kitchen, chiefly as a pastry cook, she published her best-selling The Appledore Cook Book in 1872, at the age of 29. Having fed summer visitors at several of the big resorts that newly perched on the mountains and coast of New Hampshire, Parloa understood that the escapees from city life who spent their days hiking and rowing and fishing and sailing, or just breathing fresh air on the veranda, wanted plain Yankee cooking and lots of it. Her recipes lay that out in correspondingly simple, direct prose.

A true educator, Miss Parloa provides comprehensive instructions for tricky procedures that other authors tended to gloss over. As a recipe writer myself, I recognize her dread that an ill-written direction might lead readers astray; that one epic fail could crush the confidence of a novice cook. She dithers herself into concluding one recipe with the suggestion that maybe the dish shouldn’t even be attempted at all.

I like to think that her occasional crises of confidence reflect an intuition that words alone are sometimes insufficient to convey a critical process. It’s not hard to imagine Miss Parloa as a YouTube sensation, putting up videos full of tips and tricks, such as Make a Successful Boiled Batter Pudding Every Time. Today food historians remember her chiefly as the founder of path-breaking cooking schools in Boston and New York, and instigator of a new movement respecting direct, clear culinary instruction for home cooks. 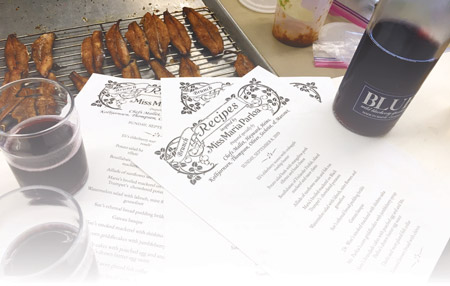 So with the shade of Maria Parloa looking on, fish biologist Eugene Won leads participants in hands-on mackerel fileting (actually dissecting and describing internal structures that most of us cooks simply relegate to the category of “guts,” I’m ashamed to say); we filet scores of fish, then set many of them up to smoke. (Chef Sam Hayward quietly works alongside to prep chiles and lemons to accompany the pending inevitable sashimi moment that must occur whenever an abundance of truly fresh fish are processed.) Next, it’s time to accompany ecologist Greg Moore on a foraging expedition among the scrubby island vegetation. We return to the kitchen laden with berries and bark, twigs and leaves; John Forti siphons off a few choice bits to add local color to the group’s evening cocktail; the rest find their way to accenting a variety of dishes on the upcoming dinner and brunch menus.

Grabbing a wetsuit and snorkel, Chef Evan Mallett leads a contingent to a rocky tidal pool. The tail end of hurricane Dorian is still whipping up such surf on the outer face of the island that Jenn Seavey forbids us to even approach that rogue-wave vulnerable shore. But the tidal pool on the lee side is placid, if frigid, and by this time Evan is slowly and methodically finning about the far edge like the Creature from the Black Lagoon. Grateful to be loaned wetsuits, a few of us participants immerse ourselves in a freezing yet captivating underwater world and pick up crustaceans, bivalves, periwinkles and toss them in collection bags. I am chagrined to see but pleased to capture (in my glove on the fly—I’m so mighty!) the same invasive green and Asian shore crabs we have back home on the Massachusetts coast. When we all get too chilly, Evan, who it turns out is a skilled and knowledgeable gatherer, sorts through our collective haul and the wheels in his head determine which critter will go into which preparation in the kitchen. 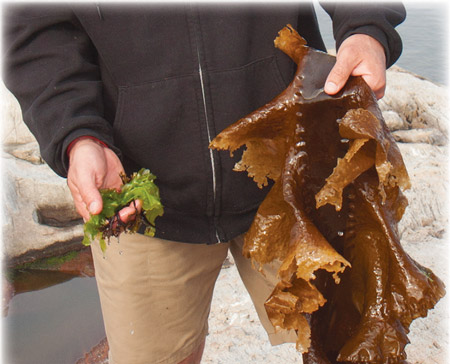 The meals over the course of the weekend are terrific—layered with fun and meaning, spiked with imagination—creatively using every part and essence of every living thing we gathered. Probably to a lesser degree than in Miss Parloa’s day, the chefs had arranged for certain supplies from mainland farms, and had brought special treats from their kitchens… because, well, that’s what chefs do…

As we talk, I realize that Sam and Evan came to food history as an extension of their hyper-local impulse, framing the question as, how did people feed themselves in this setting in the past? Not every chef has the innate self-confidence that allows them to open their culinary imaginations to the humblest ingredient or technique, let alone those that seem old-fashioned and discarded. But this pair understands the value in asking those questions which happen to be brought into sharpest focus in a circumscribed setting, like, say, an island: If it lives here and can be sustainably harvested, why not try to figure out the most delicious way to eat it? How did people eat it a hundred years ago? What about a thousand? 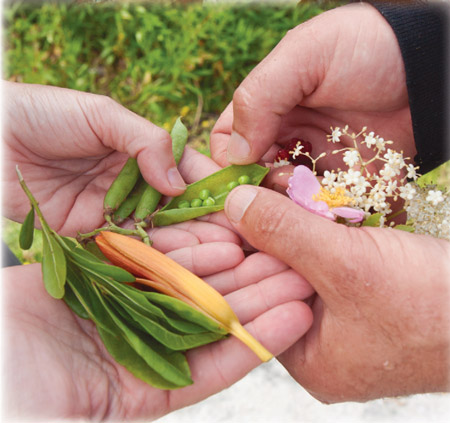 The joy of cooking with joyful cooks.

Like Maria Parloa, I spent a chunk of my twenties toiling in hot restaurant kitchens. I don’t know about the head cooks she worked under, but none of my bosses were anything like Sam or Evan in the kitchen. While exactingly producing many fine dishes with a pickup group of unevenly experienced helpers, they remained calm, respectful, and good-humored. Let’s just say that these traits are not always present in professional kitchens. So, one of my fondest memories of the weekend was formed as Evan took the lead in the production of a two-dozen-dish Sunday Brunch using up the last of the bounty in head-spinningly clever ways. As we were in the final approach to service, Sam took on the job I would most fear. Not broiling scores of mackerel; not making Miss Parloa’s drawn butter sauce, not seasoning the bouillabaisse, nor compounding the aillade of freshly harvested sunflower seed embryos with fish roe …. no, like the compassionate veteran he is, he took on the poaching of fifty eggs, not a sexy task, yet so fraught with danger. Not only were his perfectly cooked eggs succulent upon serving with their brandade fishcakes, but throughout the process he calmly conversed with the crew on a variety of topics. He melted my jaded food historian’s heart when out of the blue he said, “Hey, Evan, did you ever read The Midwife’s Tale, by Laurel Thatcher Ulrich?,” then casually recounted episodes from Martha Ballard’s daily work life in 18thcentury Maine. 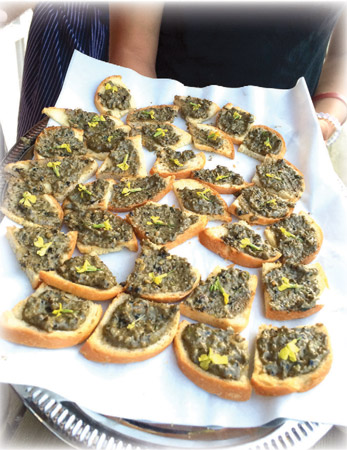 Overhearing that interchange—while part of a kitchen crew putting the final touches on a fabulous modern menu inspired by the recipes of Miss Parloa—filled me with joy and gave me hope. These culinary leaders have been in the vanguard on many positive movements in sustainable food culture: farm-to-table and nose-to-tail eating, seafood-traceability, fair trade and fair treatment of food workers, to name a few. I love to think that their taking seriously the lifework of past cooks may just help bring about a little revolution toward using past expertise to plan future food.

Take a Bite out of Appledore happens at the Shoals Marine Laboratory, which is jointly run by the University of New Hampshire and Cornell University. 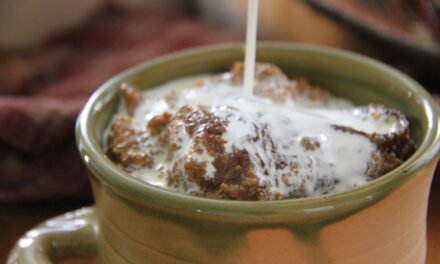 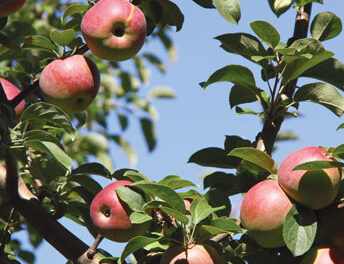 How Do You Like Them Apples? CN Smith Farm, East Bridgewater 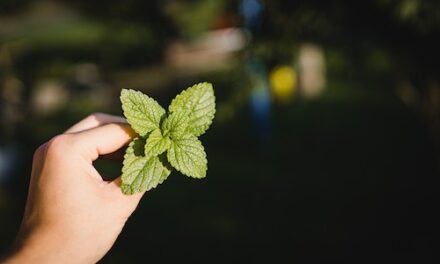 What to Do with All Those Herbs 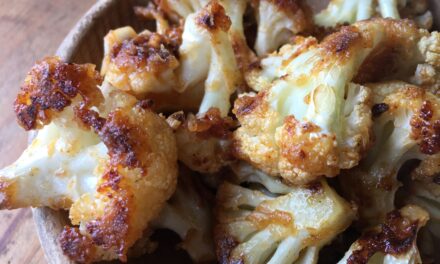