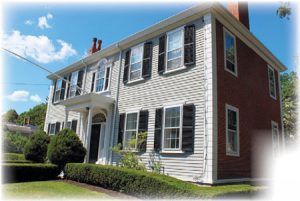 The stately Main Street home, in the heart of Hingham Square, reveals little of its backyard secrets. Passersby—of which there are many, from residents to tourists—would be surprised at what lies beyond the traditional wrought iron fence.

“It all started because I wanted to make cheese,” notes property owner, Sue Roy. “One thing just led to another and now we have this; welcome to my backyard.” The manicured lawn quickly gives way to a lovely space that includes a large kitchen garden, a flock of chickens, and a small herd of goats—perhaps reminiscent of an earlier era in the home’s 200-year history.

Sue’s interest in cheesemaking required a reliable supply of goat’s milk. Not finding one, she figured that her backyard might make a nice place for a goat, and decided she’d get herself one, or perhaps two.

An inquiry led her to Rosasharn Farm in Rehoboth, a leading Nigerian Dwarf goat breeder, which became the source for both goats and education. Sue’s daughter Lily embraced the backyard goat experiment, learning alongside her mom and assisting in the initial selection of two does.

Nine years later, Tabby, now the granny of the herd, is one of the two goats originally purchased from 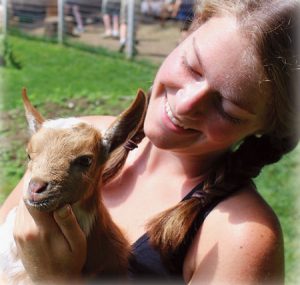 Rosasharn. She, along with Chrysanthemum, Daffodil, and Hazel Grace, permanently reside at Sue’s Main Street address now named Greener Pasture Family Farm. The transformation from traditional backyard to farm included adding an inconspicuous fence around the perimeter of the 1.5 acre property, allowing both goats and chickens to freely range.

Sue schedules breeding so the arrival of “the babies” coincides with her summer break from her role as a special education teacher. She and Lily then take on the time-consuming tasks of assisting in the births (when necessary),
caring for the babies, and milking. A name is chosen for every goat, with Lily’s line of goats named after literary characters and Sue’s line named for plants and flowers.

At eight weeks, most offspring are lovingly placed with families or local farms. Greener Pasture goats can be found prancing around backyards and farms throughout the South Shore and beyond—including Weir River Farm in Hingham, and Holly Hill Farm in Cohasset. 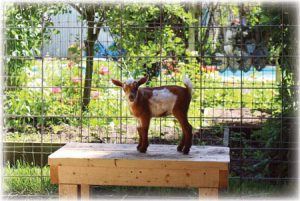 Lily’s initial interest in the goats led her to join the 4-H group at Rosasharn Farm. “The 4-H group in Rehoboth was wonderful for Lily, but was just too far of a drive,” notes Sue. “So we decided, why not just start our own group?” So they did. As things seem to happen for Sue, one thing led to another and now
her Main Street property is home to Kids On Pasture, the only 4-H goat group on the South Shore. The group, comprised of 15 kids, meets every Sunday, year-round. Under the watchful eye of group leader Lily, who is now 17 years old, the human kids show their goats at the Marshfield Fair.

Sue’s list of chores includes milking twice a day, from June until November. And once she’s collected a gallon of milk it’s time to make cheese! 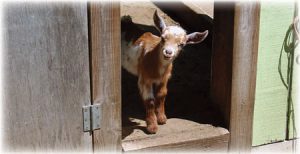 From the porch of her old house on the corner of Pond and Pleasant, Elle Maynard dreams of living on a farm. Her husband, two teenage sons, and two middle-aged dogs have varying views on the idea.