In case you haven’t picked up on it yet, this Autumn 2016 issue of edible South Shore & South Coast is all about “Living on the Fringe”. As I pondered where to take that theme in my column, several friends and acquaintances remarked that tackling fringe-living should be like falling off a log for me.

As someone who has fallen off her share of logs, I was disconcerted by these folks’ confidence. What is it about my way of cooking and eating that seems so fringe-y, anyway? From my perspective, my kitchen is 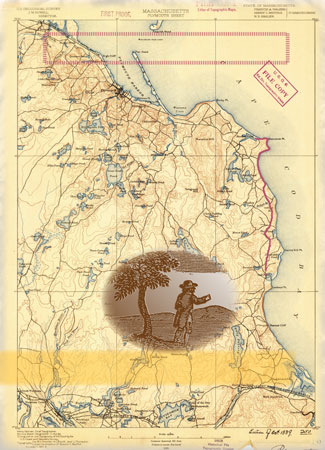 “I learned this, at least, by my experiment; that if one advances confidently in the direction of his dreams, and endeavors to live the life which he has imagined, he will meet with a success unexpected in common hours.” -~Henry David Thoreau

right in the very epicenter of all I survey, not off in some tangential neverland. Mulling this over, I noted that I was a bit put out for being thought at home in a region frequently modified by the word “lunatic”.

I got a grip on myself by reflecting that, all things being relative, everyone’s fringe is someone else’s center. And vice versa. On June 15th, 1857, when Henry David “Different Drummer” Thoreau set out on the first stage of one of his long walks that formed the core of his book Cape Cod, his Plymouth friends, the Watsons, dropped him at the end of the road on Manomet Point with great trepidation. A mysterious region of unmarked paths winding through sandy pitch pine and scrub oak forest, meadows and cornfields—a sort of a terra incognita even to his local pals—lay between him and Ellisville, the South Plymouth village where he planned to pick up the road, then the rail, to Sandwich. In his Journal, Thoreau described his transit of this country with his usual blend of alienation from human endeavor and attraction to the natural world. The locals he encountered apparently regarded him with bemusement; those who didn’t mistake him for a peddler tried to befuddle the out-of-towner with epic tall tales of life on the water.

Even Thoreau, who could not be described as gregarious or conformist in any way, was a bit taken aback by the isolation of these people. Neighbors warned him away from staying with one “Harlow”, who had “lived alone like a beast there ten years”; he thus sought lodging a bit farther along in Ellisville, “having walked six or seven miles from Manomet through a singularly out-of-the-way region, of which you wonder if it is ever represented in the legislature.” 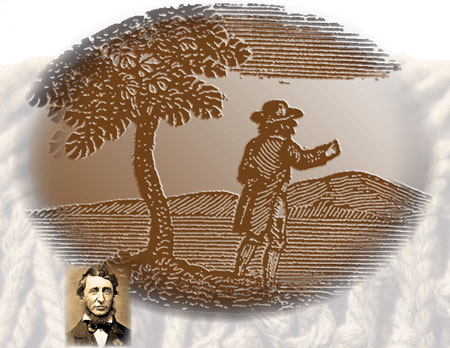 “A man is rich in proportion to the number of things which he can afford to let alone.” -~Henry David Thoreau

And what were these fringe people eating? At the Ellis house, Thoreau, who arrived too-late-for-supper on the household’s washing day, was fed pie (unspecified type, but described as “baked for just such an emergency”). He got a report on the local lobster business (thriving) from Mr. Ellis, and learned from an actual peddler that dry goods would sell better in this neighborhood than the cutlery he had carried from the western part of the state. Thoreau had crossed plowed fields near Center Hill, but was mum on what crop. That day and the next, as he worked his way Capeward, he saw menhaden skipping on the Ellisville salt pond, learned that people can still shoot deer in the neighborhood (almost unheard of in those deforested days); he ate herring for supper and eel for breakfast, observed folks shellfishing, and catching scup and bluefish, saw wood-cutters’ landings and even (when further along, in Harwich), investigated his first commercial cranberry bog.

So, these folks were hunting and gathering, engaging in mixed agriculture, cutting wood—in all cases, both for their subsistence and commercially, if a buyer and transport could be found. Supplies— like flour for Mrs. Ellis’ pies (her baking being both to feed her family and as part of their “hospitality” business)—required a trip by land or sea to Sandwich or Plymouth, or a visit from the right kind of salesman. 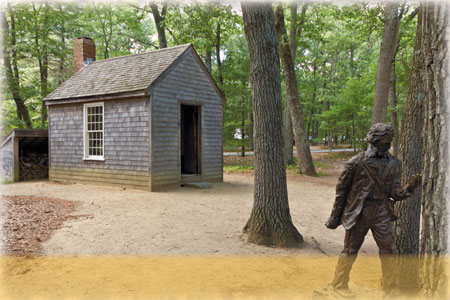 This is my neighborhood 160 years ago; its character just shouted fringe to folks from more sophisticated areas (that is, the whole rest of the state). Reading of its past isolation and edginess is an exercise both amusing and rueful for someone who chafes against the “build-out” of the “burbs,” but loves that she can buy Vietnamese and Brazilian ingredients within five miles.

In the end, who decides where the center is? Thoreau, a well-connected Harvard graduate and trained surveyor from a good family outside Boston, walked away from the center and its life-frittering pursuits, choosing instead the paths of periphery—studying nature, writing poetry, civilly disobeying … heck, just walking, in an era that was already accelerating toward internal combustion.

Sound familiar? Know anyone uncomfortable with the center they’ve been assigned and itching for a little centrifugal motion? In my travels, I meet many individuals who yearn for self-sufficiency; these are not survivalist misanthropes. They tell me their particular interests—raising more of their own food, experimenting with wild edibles season by season, exploring fermentation in its multifarious applications, making their own utensils of native materials, or, of course, cooking with fire. At the bottom, the common thread seems to be a desire to walk at least a little apart from the consumer juggernaut, to eat delicious foods and use beautiful things that have never been commodities, and to have the satisfaction of sharing with others things made with the hands.

Article by:
Paula Marcoux lives and cooks in Ellisville, a stone’s throw from the locus of Thoreau’s Plymouth fringe experience. Like Mrs. Ellis, she keeps a pie or two handy in case of peddlers.

“This world is but a canvas to our imagination.” ~Henry David Thoreau 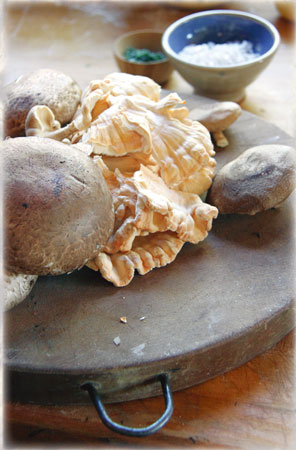 “I went to the woods because I wished to live deliberately, to front only the essential facts of life, and see if I could not learn what it had to teach and not, when I came to die, discover that I had not lived.” ~Henry David Thoreau

Those Plymouth friends who dropped Henry T. off in Manomet lived on their own kind of self-determined fringe. Benjamin Marston Watson, a Harvard classmate of Thoreau’s, was a renowned seedsman and plant-breeder. Mary Russell, born to an elite Plymouth family, worked as a nanny for Ralph Waldo Emerson and did a stint at the Brook Farm experimental community (she was also said to be the beguiling subject of Thoreau’s poem, To the Maiden in the East, leading to all sorts of speculation both then and now). After Marston and Mary married, their home and nursery, Hillside, became a salon of sorts for local and visiting intelligentsia (albeit one with lots of transplanting and other digging).

At Hillside, as well as at the family enclave on Clark’s Island, Mary took delight in laying a carefully chosen table, mixing the best of hunted and gathered foods with the fruits of farm and garden: roast partridge, duck and goose; broiled mutton chops; poached salmon with a salad of asparagus; roast oysters, Marlboro Pudding.*

*These two recipes have been featured previously in this column: Roast Oysters, Winter 2014 and Marlboro Pudding, Winter 2012.

One of Mary’s many letters mentions “a famous dish of broiled mushrooms on toast” made during a sojourn with friends at Plymouth’s Long Pond, between moonlight rides and sails, picnics, and bonfires. A perfect dish with which to relish our fringe-lives in any century.