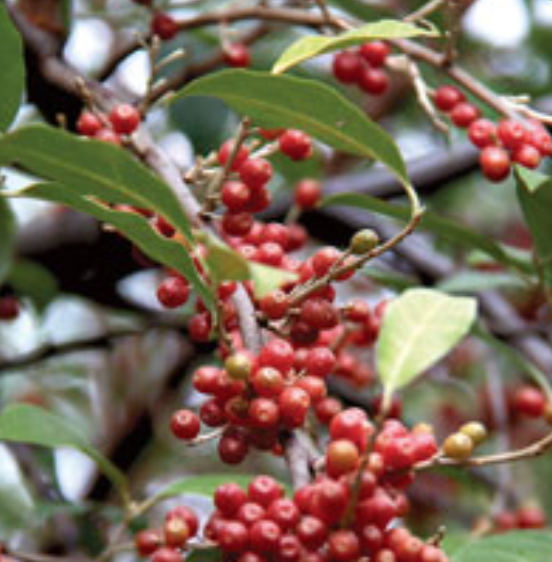 Tink, tink, tink—music to my ears as my latest batch of wild edibles foraged off my local beach cools, sealing in the goodness. I slather yet another heaping teaspoon of rose hip (Rosa rugosa) jelly on toast. My thoughts are on the anticipated harvests that nature’s autumn bounty will bring. Savory nuts of the Black Walnut, Hazelnut and Hickory trees, the spicy crunch of Burdock, Evening Primrose roots, and the juicy sweet tartness of the berries of Wild grape, Elderberry, and Sumac. One of my favorite wild edibles is that of the berry of the Autumn Olive (Elaeagnus umbellata) shrub.

Autumn Olive, introduced into the United States in 1830 from Asia and Japan, was primarily used as fast-growing ornamental shrub along highways for soil restoration and wildlife habitat. The shrub can grow to 12 feet and taller in a few years, and is now considered one of the fastest growing invasive plants on the eastern coast of the U.S. Because of its affinity to grow in poor soils, and its abundant seeds, it can be found growing on the edges of old pastures, railroad tracks, sparse woods and roads. The seeds spread by birds and animals, and crowd out native species by creating dense shade. It also changes the nutrient density of the soil by fixing nitrogen with nodes on its roots similar to the legumes of the vegetable family. 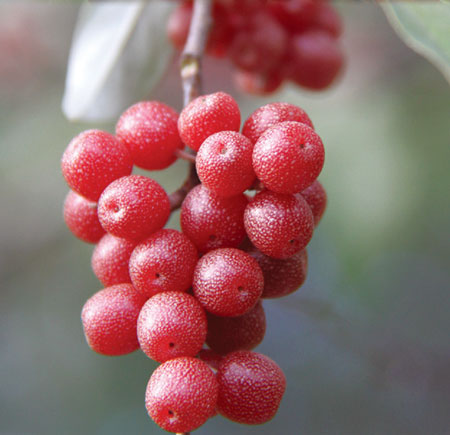 Autumn Olive is easily identifiable by green and silvery-grey elliptical shaped leaves that flutter in the wind. The shrub no doubt got its name from the leaves’ similarity to that of the olive tree. By the fall the bush’s aromatic, four-petaled yellow flowers develop into round red berries with silver spots. They are abundant and can be easily harvested gleaning a couple of gallons of berries in an hour or less. My kind of foraging, easy accessibility, and abundant.

I sample the berries as I forage to ensure the just the right degree of piquantness I desire. The berry’s taste can range from very astringent to sweet-tart (a.k.a., a cranberry), depending on the time of harvest and individual bushes. As the fall season grows colder the berry takes on a sweeter taste as early frosts temper its acidic quality. Harvesting and freezing the berries will ‘blett’ or get rid of the tannic acid that gives it an astringent taste.

The berry is a powerhouse of nutrition. High in vitamin C, it has more than 17 times the amount of lycopene found in tomatoes. Lycopene is a powerful antioxidant that has been found to aid in the prevention of some cancers and heart disease. The large seed is edible and is chocked full of omega 3 fatty acids which reduce inflammation in the body. Great taste and good for you too! 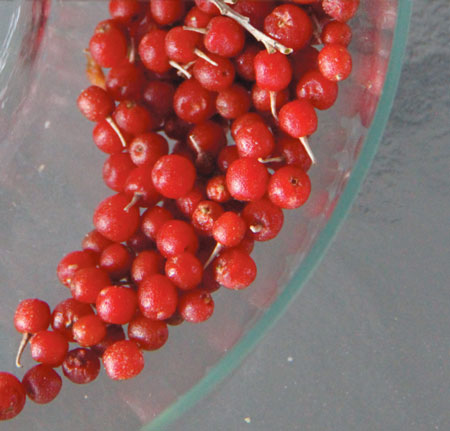 The berry is wonderfully versatile as an ingredient in jellies, wine, sorbet, and in dressings. Fresh berries add a delightful crunch in a salad or toppings on cereals. Simple syrups can be drizzled on ice cream or pancakes, or in a reduction for meats and vegetables. I like to make tasty Olive Autumn simple syrup to add to cocktails, to give them a pink lemonade taste and blush of color.

As with any wild foraging be sure of the ‘cleanliness’ of the source. Avoid high-traffic areas that might load the harvest with toxic car exhaust chemicals, avoid areas that could have herbicides or pesticides applied, and in general, know the health of the area from which you pick. Be respectful of nature’s creatures that may depend on its source for food or habitat. A general rule of thumb is to harvest only one-third of the bounty. In the case of Autumn Olive berry, eat up! We just might help stave off the curse of this invasive plant and benefit from its tasty goodness and nutrition while doing so!

Sally Rossi-Orman lives in Scituate with her husband and son and is a lifelong forager, naturalist, and teacher and loves eating up the South Shore!