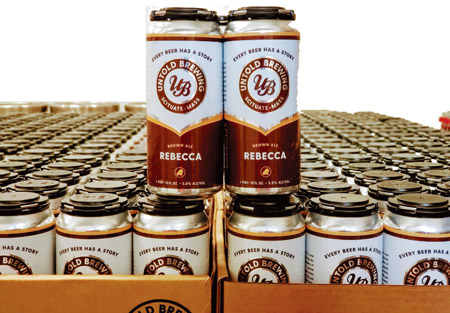 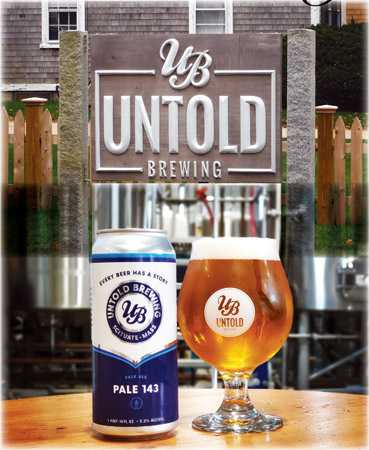 The famous bitter New England cold is no stranger in the town of Scituate. Located on the coast, frequent massive winter storms pummel its shores with wind and waves and blanket its inland areas with heavy, wet snow. Untold Brewing hopes their taproom offers a break from the winter cold and some measure of comfort to its patrons.

“The taproom has a great vibe,” Kristin Greene, partner and head of marketing and social media for the brewery, notes. “We have 12 taps here, run movie nights and yoga, and really try to offer a place for comfort and community with a beer-centric focus.”

The yoga classes are held at the brewery, and the cost for the class includes a 10-ounce beer. “We partnered with Studio 143, which is right down the street from us and owned by Cindia Norton,” Kristin continues. The instructor brings in live music for the class, which has featured local musicians like Matt Chase and The Aldous Collins Band.

The self-proclaimed beer geek with a marketing background worked with her brother, Matt Elder, and the third partner, Kyle Hansen, to open the brewery on October 13, 2017—Friday the 13th, as it happened to be.

“It would have been silly not to,” Kyle says, explaining that they had the option to open the next day, but when you have an opportunity to brew a stout and call it Voorhees, you take it (Voorhees is a reference to the seminal ‘80s horror film franchise Friday the 13th in which the main villain is a former Crystal Lake Camp attendee, Jason Voorhees).

“The town was incredibly supportive,” Matt explains of the build-out and opening, a theme that has helped push the craft beer business across the South Shore. “I think it was a learning process for all of us,” he continues, noting that community at large has been behind the brewery every step of the way as well.

Scituate, like many New England towns, is steeped in local history, and Untold has tapped into that history in a myriad of ways. The front half of the brewery is a former one-room schoolhouse built in 1852. The owner of the building approached the Untold team about using the property. It was in great disrepair when the group was first introduced to the property, but through determination, hard work, and a lot of reclaimed wood, the brewery and taproom began to take shape. The front double doors were reclaimed from a brownstone in Boston that was being renovated, and the wood bar top was saved from building owner Chick Fagan’s home renovation, as was the plank wall behind the bar. The renovations revealed hidden treasures from within the walls, including an original chalkboard (displayed prominently in the taproom) and old bottles from Beaver Dam Mineral Spring Water, a local relic.

Untold has developed deep ties to the community in other ways as well. They’ve used coffee from the Lucky Finn Cafe (also in Scituate) in their Mr. Scratch stout and partnered with Taza Chocolate on a chocolate and beer pairing event (the owners of Taza Chocolate live in Scituate). Untold also runs twice-yearly beach cleanups, after which they treat volunteers to pints and pizza in the taproom.

Even Untold’s scheduled brewery tours give back to the community. Tours of the production floor start at 2:00 pm every Saturday. The $5 entry buys visitors a tour and a 10-ounce pour and all proceeds are donated to various local charities, including the Scituate Animal Shelter, North and South River Watershed Association and, of course, the Scituate Historical Society. 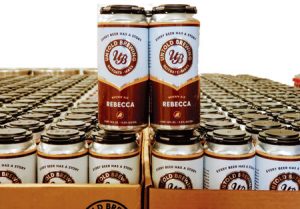 Matt started his brewing career like so many others in his garage; his in Seattle, Washington where he had relocated after graduating college. There Matt met Kyle, a Colorado native, who had started brewing on his stovetop. The two would become fast friends, and when Matt decided to return to his hometown to open a brewery, Kyle was more than willing to relocate to the unfamiliar locale. “We learned from very passionate brewers out there,” Matt affirms, speaking of the pair’s time in Seattle, and it shows in the beers.

The taproom’s 12 taps feature a mix of classic styles and modern brews. Everything from a clean, crisp blonde ale (Abigail, 4.9% and one of the taproom’s most popular pours) to the hazy juiciness of Leave Only Footprints, one of the many different New England IPAs the brewery produces.

Of particular note are the Army of Two paired beers: aforementioned Abigail and her sister Rebecca, a 5.6% brown ale whose smoothness builds off of the beer’s deep toasty notes. (The Bates sisters spotted British warships from a Scituate lighthouse during the War of 1812. With only a fife and drum at their disposal, the soldier sisters played a militia fight song that forced the warships to retreat, thinking a larger militia awaited them.)

East By Northwest, named after Matt and Kyle’s brewing journey, is a resinous West Coast IPA, piney and hoppy but with a stiff malt background that helps showcase the hop flavors.

The owners are full of quirky stories that drive the feeling of a community behind the beers, like the one behind Voorhees, the roast-driven stout that finishes as smooth as a machete carving up a camp counselor (please excuse the Friday the 13th reference—I couldn’t resist.).

“We want to pay homage, not only to Scituate, with beers like Abigail and Rebecca, but to our own stories,” Kristin says, mentioning East By Northwest and Voorhees as examples of the group’s stories intertwining with the brewery’s.

Matt shows a handwritten card, a thank you to the brewery from the family of the Army of Two for its work toward promoting the history and legacy of the sisters. The brewery is so invested, as a whole, in the history of the town that two employees—taproom manager Liz Carr and staff member Jane Polito—dressed as Abigail and Rebecca, respectively, at a Halloween party held at the taproom.

Untold operates a 15-barrel brewhouse, with six fermenters and two bright tanks, and added their own canning line in October. 2019 will bring some expansion, with larger, 30-barrel fermenters replacing some of the smaller fermenters they’ve been using, greatly increasing the brewery’s output. Stay tuned!

Matt Foster finds comfort in warm taprooms in the winter, where he contemplates the benefits of summer over well-made beers.